New NSA Leaks Show How US Is Bugging Its European Allies

Germany's justice minister, Sabine Leutheusser-Schnarrenberger, demanded an explanation from Washington, saying that if confirmed, US behaviour "was reminiscent of the actions of enemies during the cold war". 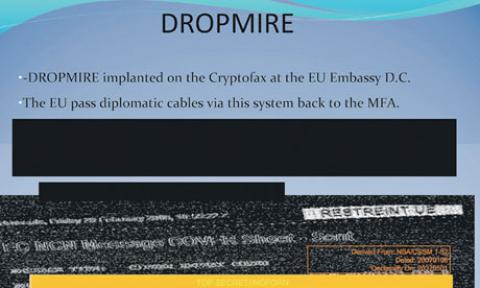 One of the bugging methods mentioned is codenamed Dropmire, which according to a 2007 document is 'implanted on the Cryptofax at the EU embassy, DC'., Guardian

US intelligence services are spying on the European Union mission in New York and its embassy in Washington, according to the latest top secret US National Security Agency documents leaked by the whistleblower Edward Snowden.

One document lists 38 embassies and missions, describing them as "targets". It details an extraordinary range of spying methods used against each target, from bugs implanted in electronic communications gear to taps into cables to the collection of transmissions with specialised antennae.

Along with traditional ideological adversaries and sensitive Middle Eastern countries, the list of targets includes the EU missions and the French, Italian and Greek embassies, as well as a number of other American allies, including Japan, Mexico, South Korea, India and Turkey. The list in the September 2010 document does not mention the UK, Germany or other western European states.

One of the bugging methods mentioned is codenamed Dropmire, which, according to a 2007 document, is "implanted on the Cryptofax at the EU embassy, DC" – an apparent reference to a bug placed in a commercially available encrypted fax machine used at the mission. The NSA documents note the machine is used to send cables back to foreign affairs ministries in European capitals.

The documents suggest the aim of the bugging exercise against the EU embassy in central Washington is to gather inside knowledge of policy disagreements on global issues and other rifts between member states.

The new revelations come at a time when there is already considerable anger across the EU over earlier evidence provided by Snowden of NSA eavesdropping on America's European allies.

Germany's justice minister, Sabine Leutheusser-Schnarrenberger, demanded an explanation from Washington, saying that if confirmed, US behaviour "was reminiscent of the actions of enemies during the cold war".

The German magazine Der Spiegel reported at the weekend that some of the bugging operations in Brussels targeting the EU's Justus Lipsius building – a venue for summit and ministerial meetings in the Belgian capital – were directed from within Nato headquarters nearby.

The US intelligence service codename for the bugging operation targeting the EU mission at the United Nations is "Perdido". Among the documents leaked by Snowden is a floor plan of the mission in midtown Manhattan. The methods used against the mission include the collection of data transmitted by implants, or bugs, placed inside electronic devices, and another covert operation that appears to provide a copy of everything on a targeted computer's hard drive.

The eavesdropping on the EU delegation to the US, on K Street in Washington, involved three different operations targeted on the embassy's 90 staff. Two were electronic implants and one involved the use of antennas to collect transmissions.

Although the latest documents are part of an NSA haul leaked by Snowden, it is not clear in each case whether the surveillance was being exclusively done by the NSA – which is most probable as the embassies and missions are technically overseas – or by the FBI or the CIA, or a combination of them. The 2010 document describes the operation as "close access domestic collection".

The eavesdropping of the Greek UN mission was known as "Powell" and the operation against its embassy was referred to as "Klondyke".

Snowden, the 30-year-old former NSA contractor and computer analyst whose leaks have ignited a global row over the extent of US and UK electronic surveillance, fled from his secret bolthole in Hong Kong a week ago. His plan seems to have been to travel to Ecuador via Moscow, but he is in limbo at Moscow airport after his US passport was cancelled, and without any official travel documents issued from any other country.