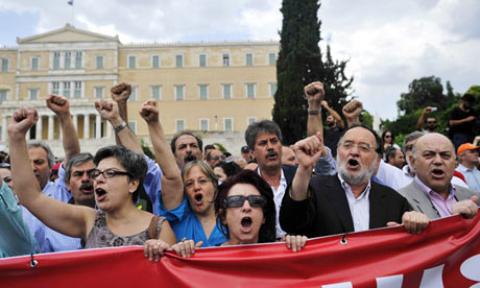 Demonstrators including opposition politicians outside parliament in Athens. , Aris Messinis/AFP

Tens of thousands of Greeks took to the streets on Tuesday as unions, protesting controversial plans to slash 25,000 public sector jobs, brought the country to a standstill in a fourth general strike this year.

In one of the biggest anti-austerity outbursts since prime minister Antonis Samaras took power 13 months ago, demonstrators poured into Athens' central Syntagma Square to oppose the cuts, which will be put to a parliamentary vote on Wednesday.

"We are people, not numbers," many chanted against a backdrop of screeching whistles and beating drums. "Fire the troika," they screamed, referring to the triumvirate of creditors at the EU, ECB and IMF keeping bankrupt Athens afloat. The lenders have warned that unless the job cuts are voted through they will halt aid payments.

The political opposition backed teachers, municipal policemen, school guards and other local employees affected by the cuts in denouncing the layoffs, saying they would only exacerbate the plight of a nation ravaged by record levels of unemployment, recession and debt. At nearly 27%,Greece has the highest unemployment rate in the eurozone.

"The policy of mass firings, the dismantling of public institutions and the demolition of any notion of labour rights initiate a new, undemocratic governance of the country," railed ADEDY, the public sector union which organised the strike along with GSEE, the confederation of Greek workers representing private sector employees.

The sackings – part of a much-delayed campaign to overhaul a civil service widely blamed for Greece's woeful economic state – are the latest in a series of measures demanded by the troika.

Almost four years into the debt crisis – and with bailout loans due to end next May – creditors have become increasingly impatient with the slow pace of progress in streamlining the 800,000 strong public sector. Almost all the approximately 130,000 Greeks who have left the service have been retirees – in sharp contrast to the private sector where job losses have soared.

In a move adding to pressure on the governing coalition, the German finance minister, Wolfgang Schauble, will visit the country on Thursday.

Greece has received €240bn in emergency rescue funds, the biggest bailout in history, since the eruption of the crisis in late 2009. By the end of the year its debt-to-GDP ratio is expected to reach 180%.

Last week, after a round of frequently fraught negotiations between the country and visiting Troika chiefs, eurozone finance ministers agreed to disburse an additional €8.1bn vital to paying salaries and pensions. But the conditions attached have raised fears that the crisis-hit nation is being pushed too far.

Last month the conservative-dominated administration almost collapsed after Samaras attempted to cut the public payroll by shutting down the state broadcaster, ERT, overnight.

In the upheaval that followed the small Democratic Left party abruptly withdrew its support leaving the coalition with 155 seats in the 300-seat house.

"I can understand, in principle, where the Troika is coming from and the pressure the government is under but the timing is very unfortunate," said Dr Thanos Dokos, director general of Eliamep, Greece's leading thinktank. "If they had done this two years ago it might have been acceptable but not now."

Under the scheme some 25,000 public employees will be placed on reduced wages in a so-called "mobility pool" by the end of the year. They will then have eight months to find work in another department or lose their jobs altogether. A further 15,000 dismissals will be made in 2014.

Critics argue that entire institutions – including the municipal police who patrol the streets of an increasingly crime-ridden capital – will be abolished in the process.

"Instead of only looking at the numbers, both the Troika and the government should also look at the social and political consequences of laying off so many," Dokos added. "There's a time to pick battles and it's definitely not now."