In reality, this trade agreement is not about promoting prosperity for all, but powerful industry lobbies trying to dodge regulation 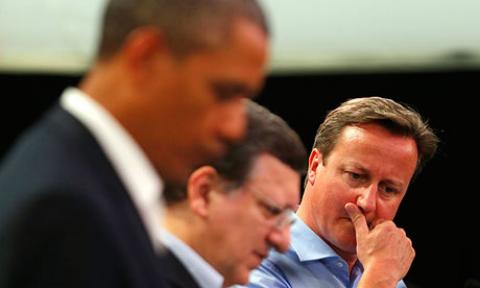 There has been a big push out of Washington to convince the public that an economic bonanza awaits us if we can just complete a trade deal with the European Union. This is complete nonsense, unless we define down bonanza to mean finding a quarter on the street.

The first point to recognize is that the promised pot of gold from this trade deal is illusory. Last week, the media held out the promise of an increase in US GDP of $122bn from the trade agreement. The facts that this referred to GDP in 2027, and that the $122bn would be in 2027 dollars, were absent from the discussion.

It also might have been worth mentioning that this $122bn was a best-case scenario in the study that was cited (pdf). This figure assumed that the trade agreement included all plausible reductions in tariff barriers.

The study also gave numbers for a deal that it described as "less ambitious" and, presumably, more realistic. Its projection of the increase in 2027 GDP in this scenario is 0.21% of GDP. That is roughly equal to a normal month's growth. Since it will take 14 years to achieve this gain, the boost to growth would be just 0.015 percentage points annually.

If that sounds too small to notice, you've got the picture. And just to be clear, this study was produced by an organization in the United Kingdom, the Centre for Economic Policy Research (CEPR),* that is for the most part very supportive of the trade deal.

As growth policy, this trade deal doesn't pass the laugh test, but that doesn't mean that it may not be very important to a number of special interests and, for this reason, bad news for most of the public. Since conventional barriers to trade between the US and EU are already very low, the focus of the deal will be on non-conventional barriers, meaning various regulatory practices.

Each industry group has a list of regulations that it finds troublesome, which it has been unable to eliminate or weaken at the national or sub-national level. An EU-US trade agreement provides these industry groups with an opportunity to do an end-run around such regulation.

For example, several countries in Europe and many state and county governments in the United States impose restrictions that make fracking difficult or impossible. In their dream agreement, the oil and gas industries will have a set of minimal restrictions on fracking. The deal will then define anything more stringent as a restraint on trade subject to penalties.

There are likely to be similar effects on food regulation. Europe has far more restrictions on genetically modified foods and crops than the United States. Since it is not possible, given current European politics, for the industry to get these restrictions eliminated, it will be looking to include provisions in a trade deal that define limits on genetically modified foods and crops as trade barriers.

Millions of people took part in the efforts last year to defeat Sopa and Pipa, two bills that would require individuals and internet intermediaries to proactively work to stop the transmission of unauthorized reproductions of copyrighted material. The entertainment industry would very much like to include comparable provisions in a trade agreement, so that it can avoid having to have another fight over this issue in Congress.

The financial industry will also be at the table trying to include language that limits the ability of governments to impose regulations. It is likely that it will try to include wording that would make it impossible to enforce a financial transactions tax like the one now being considered by the European Union. Although the industry may not be able to sway enough votes in European parliaments to prevent them from supporting a tax, they can use an EU-US trade deal to make that fact irrelevant.

And just as has been the case with every other trade agreement over the past quarter century, the pharmaceutical industry is looking to this trade deal as an opportunity to enhance its patent monopolies. It will likely push for restrictions on price controls and probably also ways to extend the length and scope of their patent monopolies. The CEPR study does not include any projection of the economic losses that would result if the pharmaceutical industry is successful in increasing protection and pushing up drug prices.

The list of industry special interest groups that hope to gain from this deal could be extended at some length, but the point should be clear. This deal is first and foremost about providing powerful industry lobbies with an opportunity to circumvent the normal political process.

As far as the projected gains to the economy from the deal, finding a quarter on the street is the right comparison. If we apply the projected income gain of 0.21% to the projected median personal income in 2027, it comes to a bit more than $50 a year. That's a little less than 15 cents a day. Don't spend it all in one place.