The bankruptcy will enable an appointed judge to impose further cuts to city expenses and to void union contracts. A prime target for cost-cutting is the pensions owed to 21,000 city retirees and 9,000 active workers. 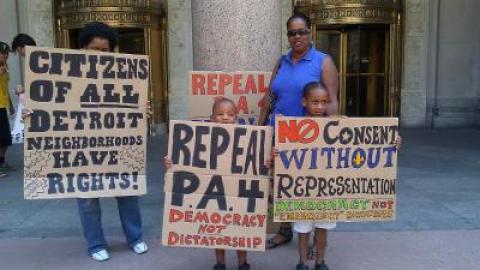 Last year Detroiters protested the "emergency manager" law, Public Act 4, that yesterday enabled an appointed official to put their city's fate in the hands of a bankruptcy judge, Stephen Boyle

Detroit hit the Trifecta yesterday--the third in a
series of body blows that politicians have landed on
the city's working people.

The Michigan legislature passed "right-to-work" in
December and gave the governor the right to impose
"emergency managers" on cities two days later. When
Detroit's emergency manager Kevyn Orr announced Chapter
9 bankruptcy Thursday, he was following a predicted
trajectory that will lead to further impoverishment and
privatization.

The bankruptcy will enable an appointed judge to impose
further cuts to city expenses and to void union
contracts. A prime target for cost-cutting is the
pensions owed to 21,000 city retirees and 9,000 active
workers. The city estimates its pensions are
underfunded by $3.5 billion, and wants to reduce
payments to both workers and the bondholders who have
lent the city money over the years: equality of
sacrifice.

Michael Mulholland, vice president of the city's
largest AFSCME local, said city workers are "in a state
of somewhere between perplexion and total anger.
Everything they've been promised, both contractually
and kind of a social contract, is being pulled out from
under them. It's morally indefensible."

Mulholland retired in February, after 29 and a half
years in the Water Department. "I could have worked
someplace else and made more money," he said, "but I
was told if I worked here I'd have a steady job and in
my old age not be in poverty."

The bankruptcy of Detroit, which now has fewer than
700,000 residents, is the largest city bankruptcy in
U.S. history.

Orr sprung the hurry-up filing yesterday because union
pension fund attorneys were scheduled to be in court on
Monday, arguing for an injunction against bankruptcy.

The state constitution appears to protect public
employee pensions: "The accrued financial benefits of
each pension plan and retirement system of the state
and its political subdivisions shall be a contractual
obligation thereof and shall not be diminished or
impaired thereby."

But proponents of making city workers bite the bullet
note that bankruptcy judges have wide latitude to break
contracts. Tag-Teaming with the Governor and the Banks

Pundits said other states and cities would look to
Detroit as a template for how to manage ailing city
budgets. A recent law in Rhode Island specifies that in
a city bankruptcy, bondholders must be paid first,
before pensioners.

Asked if the Michigan legislature could pass a similar
law, Mulholland laughed. "If they proposed a law that
Detroiters should all be shot," he said, "some of them
would get up at midnight to sign that one." Governor
Rick Snyder has guided the process of putting Detroit
through a "consent decree," Orr's rule, and now the
bankruptcy.

The Republican-dominated legislature has long been
hostile to majority-black Detroit. In November 2012,
the state's voters passed a referendum that threw out a
previous "emergency manager" law, which had been used
almost exclusively to take over majority-black cities
and school districts. A few weeks later the legislature
simply passed the law again.

Although the law requires negotiations with affected
parties before a city files for bankruptcy, Mulholland,
who was in the talks, said, "It wasn't negotiations, it
was PowerPoint presentations about how bad the
situation is.

"Orr wouldn't answer AFSCME's requests for
negotiations, so they went and taped a letter to the
door of his office."

As an AFSCME member who had reached the top of the pay
scale, Mulholland's pension is $1,600 a month before
health care contributions are taken out. He said
exactly how much Orr intends to take from retirees has
always been left vague, though union leaders were told
health care would be slashed.

Two years ago, he said, city officials encouraged
workers to retire right away. Now active workers are
told to "relax, we're going after the retirees."

Local 207 is planning a demonstration in downtown
Detroit July 25.

Orr touts the bankruptcy as a way to improve city
services--which often, in the world he comes from, is
code for privatization. Water, garbage pickup, an
island park called Belle Isle, and the Detroit
Institute of the Arts have all been mentioned as
potential saleable items. "The only thing they're going
to 'improve' is somebody's bottom line," Mulholland
predicted.

General Motors, which is headquartered downtown, said
it wouldn't be affected by the bankruptcy. Apparently,
with Snyder--who ran on his record as a businessman--in
charge, business is going to be just fine.

(Reuters) - Investors dumped Detroit's municipal bonds
a day after the city's historic bankruptcy filing even
as a ruling in state court raised questions about
whether the bankruptcy will stand up to court review.

Attempts by Michigan Governor Rick Snyder and Detroit's
Emergency Manager Kevyn Orr to put a positive spin on
the filing failed to reassure investors. Prices on some
Detroit bonds plunged and there were wider declines in
the $3.7 trillion U.S. municipal bond market.

The state court judge in Michigan's capital of Lansing
ordered Orr to withdraw the bankruptcy petition because
the state law that allowed Snyder to approve the
bankruptcy violated the Michigan Constitution. The
governor lacks the power to "diminish or impair pension
benefits," according to the ruling by Ingham County
Circuit Court Judge Rosemarie Aquilina.

Ken Klee, a bankruptcy lawyer at Klee, Tuchin,
Bogdanoff & Stern LLP, said the Judge Aquilina's orders
could be coming too late in the Detroit bankruptcy
case.

"The state judge could not order Detroit to dismiss the
case or Kevyn Orr to dismiss it, because once it's
filed the automatic stay under the bankruptcy code
kicks in, to protect the city and its employees from
lawsuits," he said.

Neither Snyder nor Orr could necessarily be compelled
to withdraw the city's petition at this juncture, he
added.

Orr, who was appointed by Snyder in March to try to
resolve the city's financial crisis and tackle its
$18.5 billion in long-term debt, acknowledged that
court battles over the need for a bankruptcy filing
could be protracted and difficult.

A first test in a Chapter 9 bankruptcy proceeding is
whether the city has explored other reasonable options
before filing, and the city will "have an eligibility
fight, I suspect" over the decision, Orr said.

"I've got 15 months left on my tenure," Orr said. "I
promised the governor that we were going to try and get
this done within the time frame provided by the
statute."

On Friday, U.S. Bankruptcy Judge Steven Rhodes of the
U.S. District Court for the Eastern District of
Michigan was assigned to oversee the Detroit case,
which involves thousands of creditors. Bankruptcy
experts expect the case could last years and cost tens
of millions of dollars.

Under the 2012 Michigan law that created the emergency
manager position, Orr's term is limited to 18 months,
after which he can be removed by a two-thirds vote of
Detroit's city council.

Detroit, a former manufacturing powerhouse and cradle
of the U.S. automotive industry, has struggled for
decades as companies moved or closed, crime became
rampant and its population shriveled by about 25
percent in the past decade to 700,000. The Chapter 9
filing by the home of Motown music is the largest
municipal bankruptcy in U.S. history.

Under the state law that created the emergency manager
position, Detroit could not file for bankruptcy without
the governor's approval. Lawsuits by pension funds and
city workers, filed earlier this month, had sought to
prevent a filing. But on Thursday, Orr filed the
bankruptcy petition, with Snyder's permission, just
minutes before Judge Aquilina was set to rule on a
petition to stop the process.

In an interview with Reuters on Friday, Snyder
side-stepped the constitutional question.

"That's a matter in litigation and we have very good
attorneys who I'm sure are on top of that," he said

The governor has sought to paint the bankruptcy filing
as a positive move for the city and the state.

"We're the comeback state in Michigan, but to be a
great state we need...Detroit on the path to being a
great city again," Snyder, a Republican, said at a
press conference.

Snyder acknowledged that the bankruptcy would be seen
as a new low point for the city, but said, "This is the
day to stabilize Detroit."

Orr addressed concerns that art works at the Detroit
Institute of Arts or other city assets would be
auctioned off to pay off creditors, who have been
offered pennies on the dollar.

"Right now, there's nothing for sale," he said.

Vice President Joe Biden told reporters on Friday that
White House officials had been briefed on Detroit's
situation, but that it was unclear what help the
administration could provide.

In the state court proceeding on Friday, Judge Aquilina
said she plans to keep the White House informed on
matters affecting pensions by sending her rulings in
the state cases to President Barack Obama, according to
her law clerk, and attorney William Wertheimer, who is
representing retirees in a lawsuit.