“The simple fact is that there are no economic constraints to solving mass unemployment. For Washington, however, it’s just not a priority.” 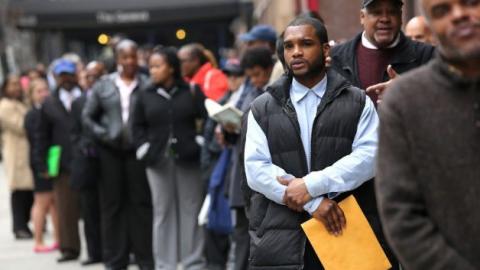 The BBC said joblessness in Europe is reflected in “shocking numbers.” President Francois Hollande spoke of his commitment “to end youth joblessness.” And, German Chancellor Angela Merkel has made it a campaign issue in the run-up to her country’s national elections in September.
“We must not allow there to be a lost generation,” said Merkel ahead of the July 3 summit she convened on the problem. The meeting drew 28 European leaders or their representatives. Youth unemployment, she added, is “perhaps the most pressing problem facing Europe at the present time.... It is highly regrettable that parts of the economic elite assume so little responsibility for the deplorable situation.”

While the summit was underway at the Berlin chancellery, union members from across the continent waved banners reading: “Stop talking, act now.”

“Merkel has spent most of the eurozone crisis insisting over-indebted states cut public spending,” Michelle Martin wrote in The Independent (UK) July 5. “Now, just ahead of her re-election bid in September, she is trying to rebrand herself as savior of Europe's jobless as well as its public finances.”

Merkel’s main challenger in the upcoming German elections, Social Democrat (SPD) Peer Steinbruck, said, “This economic crisis is turning into a political crisis, which is threatening social stability in these countries, and Germany cannot remain indifferent.” The euro zone jobless rate was reported to be 12.1 percent in May, up from 12.0 percent in April. The youth unemployment rate was 23.8 percent. An estimated 3.5 million women and men under 25 years old are unemployed. In Spain and Greece the youth unemployment rate nears 50 percent.

The aid package approved by the European governments is allocated for the next two years and is part of a program that promises to guarantee every worker under 25 years old new employment, further education, or training within four months of becoming unemployed.

Not everybody on the continent thinks the $7.8 billion so far allocated by the European Union governments under Merkel’s prodding is enough to have the needed impact. One participant called it “drop in the bucket.”

I hate to be cynical here but there is a lamentable irony in all this. The youth jobless rates in various rich European countries reach levels that have existed in many African American communities in the U.S. for decades, and suddenly there’s a continental summit do something and pledges to take major action to end the scourge.

It didn’t really get much media attention but the African-American unemployment rate for June came in at 13.7 percent - up from 13.5 percent in May. It’s been over 13 percent for the past couple of years.

According to the National Women’s Law Center, the unemployment rate for African-American women is higher today than it was when the current economic crisis began. Currently, it stands at 12 percent, compared with 11.8 percent in June 2009 and 7.1 percent in December 2007.

On PBS, business writer Paul Solman commented June 28, “What you might call ‘full employment,’ then, would seem to be about 4 percent. Young African-Americans have an unemployment rate more than ten times as high.”

“The current completely dysfunctional Congress has no plan for any jobs let alone summer jobs,” Lauren Victoria Burke, managing editor of Politic365.com, blogged at Crew 42 last week. “In 2010, Rep. Barbara Lee (D-CA) was the Chair of the Black Caucus, she and CBC vice-chair Rep. Emanuel Cleaver (D-MO) bugged everyone on the issue of summer jobs for youth. They were joined by Reps. John Lewis (D-GA) and Bobby Rush and many others. After two summers of inactivity by Congress and the White House on the issue of summer jobs, the rate hit 43.6% last month, the highest of the year.”

African Americans ages 18-29 face an unemployment rate of 23.7 percent. During the Great Depression of the 1930s, the jobless rate peaked at 25.4 percent.

Economist, Paul Krugman, notes that, far from “improving,” the economy remains in “a low-grade depression.” Referring to that statement, radio commentator and former commissioner of the Texas Department of Agriculture, Jim Hightower, said, “Of course, that thermometer zooms to high-grade if you’re among the millions of Americans who’re jobless, working for low wages, or able to get only part-time, temporary employment. Yes, the unemployment rate has ticked down – but not because of any jump in job creation. Rather, the dismal lack of hiring has become so discouraging that many people simply give up the hunt, which magically removes them from the ranks of the unemployed.”

“Most congress critters clearly don’t care about America’s middle-class jobs depression,” wrote Hightower. “The White House cares, but doesn’t treat it as the crisis it is, so nothing happens. The only jobs push we’ve had is the stop-gap effort by the Federal Reserve to pump enough money into the economy to keep unemployment from worsening.”

“But rather than push harder, Ben Bernanke, head of the central bank, recently sounded retreat,” continued Hightower. “He, too, uses the faulty unemployment statistic as a crutch to claim ‘improvement’ – the jobless rate, he says, could drop to seven percent next year, so the Fed’s stimulus will no longer be needed.”

“That’s shameful,” wrote Hightower. “Even if that was the true rate, seven percent equals 11 million unemployed Americans and many millions more who’d still be underemployed. From Bernanke to Congress, all government officials who shrug their shoulders and give up on helping that many Americans should themselves be made jobless.”

Terrance Heath, blogger & web producer at Campaign for America’s Future said recently, “As the recession continues, conservative economic policies have only made things worse for African Americans in terms of employment. Deficit-and sequester-driven spending cuts have led to layoff and job losses in the public sector. African Americans are disproportionately represented in the public sector workforce, and thus disproportionately impacted by public sector cuts.”

Heath went on to note that about one in five African Americans work in the public sector, and “With manufacturing jobs in decline, public sector jobs became an alternate path to the middle class for many African-Americans. Now the Black middle class is threatened by the loss of those jobs, too.”

The Europeans are planning another summit on youth unemployment in the fall.

Meanwhile, there are no high level meetings on the problem slated in our country. No matter what the motives of the individual European leaders or the wisdom or reach of their prescription for dealing with the prospects for the jobless, at least there is recognition on that side of the pond of the seriousness of the situation and the likely consequences of leaving it unaddressed. We should be so fortune as to have youth joblessness as a campaign issue here.

“Left to its own devices, the American economy is eroding the American job. Hours decline, dragging take-home pay down with them,” American Prospect editor-at-large Harold Meyerson wrote in the Washington Post last week. “The identity of the boss becomes mystified, much to the boss’s advantage. A government commitment to full employment, backed up by the public investment required to create it, would bolster not just the quantity but also the quality of our jobs. Republicans are dead set against that, however, and most Democrats appear to have abandoned the fight. So much for the American job.”

Marking July 4, Richard Eskow of the Campaign for America’s Future wrote, “Today the headlines cheered the latest unemployment figures as if they were some sort of victory, not the continuation of a human tragedy for millions of Americans. Apparently our political leaders don’t want to talk about their suffering, perhaps because they’re not willing to expend ‘political capital’ by trying to help them. And our journalistic class, by and large, hasn’t bothered to understand what’s happening in our country.”

Jamelle Bouie, a staff writer at The American Prospect said, “The simple fact is that there are no economic constraints to solving mass unemployment. For Washington, however, it’s just not a priority.”