Today Portside is posting another comment on Brooklyn College plans for the Graduate Center for Worker Education. This response comes from Manny Ness to his BC colleague Robin Corey's statement, posted yesterday. The focus for the debate on what is the nature of workers' education programs, who is admitted to them, and how they are run, is at Brooklyn College. However the issues have ramifications for the broader education and labor movement. 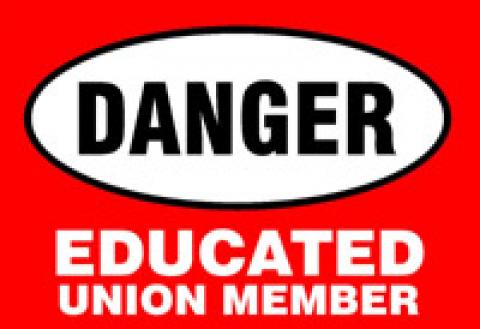 union campaign button in support of workers education, CUPE Local 2745 Education Support Staff (Canada)
Here are the facts and history about the Brooklyn College Graduate Center for Worker Education (GCWE) that I hope will provide an accurate portrayal of the program and correct the distortions of Corey Robin's blog post that serve management interests rather than students and faculty.
Robin's attack is based on a secret report (we await Edward Snowden's release from the NSA archives with eager anticipation).  Is this what members of the academy and their supporters want?
This is why students and alumni, as well as the New York City labor movement support the GCWE and other worker education programs and urge you to sign their petition.
Manny Ness
[Immanuel Ness is Professor of Political Science at Brooklyn College - City University of New York. He is the editor of the journal WorkingUSA. His books include Immigrants, Unions, and the New U.S. Labor Market; Trade Unions and the Betrayal of the Unemployed: Labor Conflict in the 1990s; and Organizing for Justice in Our Communities: Central Labor Councils and the Revival of American Unionism.]
Add your name to the petition - http://petitions.moveon.org/sign/save-brooklyn-college?source=s.fwd&r_by=4645131

Committee of Concerned Students, Alumni, Faculty & Staff and more than 1400 signers, including:

=====
[Moderator's Note: Portside is presenting these diverse views, statements and opinions as a contribution to left debate, dialogue and discourse. The decision to post the petition and the responses does not reflect a collective position on the part of Portside, but a responsibility to air a controversy in the left in a fair way.]
Subscribe to Portside