Why Banning Russia from the Olympics is a Terrible, Horrible, No Good, Very Bad Idea

The time to organize resistance begins now, with no illusions in the IOC, their corporate sponsors, or the good will of our own government. 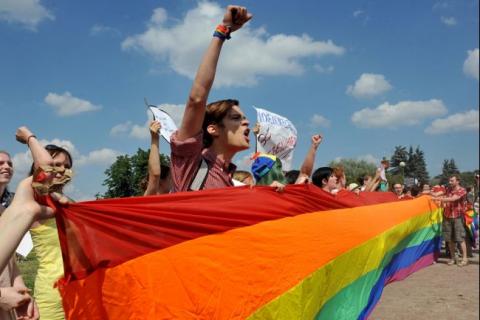 There are few people in the sports world I respect more than Cyd Zeigler the founder of the website Outsports, which deals with the sporting lives of lesbian, gay, bisexual and transgender athletes. I tweeted Mr. Zeigler's excellent article titled “Don’t Boycott Olympics Ban Russia From Competing Instead” precisely because it was incisive and made me think. I do however feel that on principle I need to state that I strongly disagree with his central premise.

Zeigler’s argument is that Russia should be treated as a pariah state not unlike South Africa during the time of apartheid, excluded from most major international sporting events.

As he writes, "Think a Russian ban is crazy? There’s precedent for it. In 1964, the IOC [International Olympic Committee] banned South Africa from participating in the Olympic Games because of apartheid in that nation. The ban remained in force for 28 years, until apartheid ended. Let Russia, as host, watch the games from the sidelines as 200 other nations slide across the ice in Sochi."

I disagree with this demand, even though I oppose with every fiber Putin’s brutal crackdown on Russia’s LGBT community.

I disagree for three main reasons. First and most obviously, such a move would do far more damage to the Russian athletes themselves, than to Vladamir Putin. If we are against making the athletes political pawns, as Zeigler has written in an article opposing a US boycott, then we should stay true to that no matter the country. Athletes shouldn’t have to pay the price for being born in a country abysmal on human rights.

Second is the critical question of who gets to initiate such a powerful demand. Inside the apartheid South Africa cited by Zeigler, there was an actual organization called SANROC, the South African Non-Racialized Olympic Committee that called for their own country’s exclusion. SANROC organizers like Dennis Brutus went to jail or were shot in the name of keeping South Africa out of the Olympics and other international sporting events. Black and brown athletes, even when they were the best on the field, were excluded from South Africa's teams. We haven’t heard any such a demand from Russia’s LGBT athletes or straight athlete allies. If we did, it would change the calculus of this dramatically.

This leads to the third fallacy in the “expel Russia” argument. Zeigler writes, "Instead of asking athletes, coaches and fans to risk disqualification, arrest or worse in Sochi, Russia this winter, it’s time for the IOC itself to take a stand."

The IOC couldn't "take a stand" with two crutches and hydraulic lift. It was a flawed body during the Cold War. Now it's a corporate piranha masquerading as Nemo the Clown Fish, tearing countries to pieces under a miasma of soft-headed hooey about "bringing the world together through sports." Asking the IOC to be an ally in the fight against oppression is like asking a scorpion not to sting. The mere fact that the Winter Games are in Putin's Sochi - where the disappearance of 30 billion dollars in Olympic construction costs has elicited barely a pip from the IOC - only shows who they are and where they stand.

This connects to the last and most serious problem with Zeigler’s argument. Having forces in the United States and the West - or in the case of the IOC, largely controlled by the United States and the West - telling Russia it can't compete immediately raises a series of thorny questions. Russia's anti-gay laws are abhorrent. You know what else is abhorrent? The drone and mass-spying program run by United States. Also our deeply racist system of mass incarceration, our treatment of women prisoners, our continued degradation of indigenous people, our record-setting immigrant deportation program, or the fact that in 29 states it's still legal to fire people just because of their sexuality.

The list goes on. This isn't about comparing and contrasting the crimes of East and West. It's about saying that if the only countries allowed in the Olympics had sparkling records on human rights, we'd be watching polar bears race penguins on an ice drift in Antarctica.

The answer in this case lies with what Zeigler dismisses: "asking athletes, coaches and fans to risk disqualification, arrest or worse in Sochi, Russia." Yes it's a lot to ask. It was also a lot to ask of Dennis Brutus when he was shot organizing SANROC. It was a lot to ask John Carlos and Tommie Smith to raise their fists for human rights in 1968. Fighting injustice actually demands having a fight. The IOC won't do it for us. If you stand for LGBT rights, then you need to stand up, pick a side, throw on your rainbow colored gloves, and start fighting. In the end, the story of Sochi will either be the celebration of repression or resistance. The time to organize resistance begins now, with no illusions in the IOC, their corporate sponsors, or the good will of our own government.

[Dave Zirin is the author of the new book “Game Over: How Politics Has Turned the SportsWorld Upside Down” (The New Press) Receive his column every week by emailing dave@edgeofsports.com. Contact him at edgeofsports@gmail.com.]