A coalition of labor, community and environmental groups is making it clear that ALEC isn’t welcome in the union town. 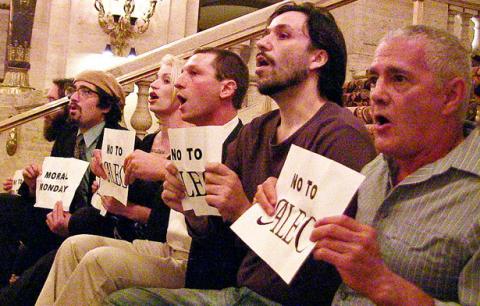 The American Legislative Exchange Council (ALEC) will begin its fortieth annual convention in Chicago today. But not everyone at the downtown Palmer Hotel will be celebrating.

A coalition of labor, community and environmental groups from throughout the Midwest will gather to protest the group’s three-day conference throughout the week, with organizers expecting the largest actions against ALEC since the group first drew attention in 2011 for its role in providing model legislation written by corporations pushing a broad right-wing, pro-corporate agenda.

A crowd of forty protesters took over the lobby of the Palmer Hotel on Monday, with six people arrested as religious, environmental and labor activists denounced ALEC. A group of several dozen hoodie-wearing protesters staged a die-in at the hotel this morning, noting the group’s role in spreading Stand Your Ground laws that helped protect George Zimmerman after shooting unarmed teenager Trayvon Martin, a mass rally has been called for Thursday organized by the Chicago Federation of Labor, and other actions are expected throughout the week.

The protests highlight the role organized labor could play in opposing ALEC. Other progressive organizations like environmentalists and civil rights activists oppose ALEC’s agenda, but none possess the resources and membership size of unions.

Targeting ALEC would certainly be in labor’s self-interest: anti-worker and anti-union legislation has been a central focus of the group, with model legislation that includes “right to work” laws (PDF), repealing the minimum wage (PDF) and opposing future minimum wage increases (PDF), and other pro-business labor laws. Their fingerprints have been on a number of high-profile legislative battles on labor issues in recent years, including Wisconsin Republican Governor Scott Walker’s 2011 Budget Repair Bill that led to the state capitol’s occupation, Michigan Republican Governor Rick Snyder’s right-to-work legislation late last year, and anti-worker (as well as anti-choice) legislation in North Carolina behind the state’s Moral Mondays protests.

In 2013 alone, at least 117 bills resembling the group’s “model bills” on worker compensation and organizing rights have been introduced in state legislatures around the country. Their bills attacking public sector unions have caught the attention of the American Federation of State, Municipal and County Employees (AFSCME), who have decried the organization in the past and are also encouraging members members to join the protests.

“We want to expose them, and we want people to understand exactly who they are,” says AFSCME president Lee Saunders.

ALEC’s legislative activities are of interest on several levels to the Chicago Teachers Union, whose leadership is expecting many of its members to attend the protests. In addition to its anti-labor bills, ALEC’s legislative agenda includes privatizing education.

Given its work on education, the environment, voter ID and other issues, “ALEC is pushing an agenda that negatively impacts all people who work for a living, whether they’re in a union or not,” says CFL Secretary-Treasurer Bob Reiter.

Beyond education and labor, ALEC has played a key role in helping pass an enormous number of pro-corporate laws at the state level for years. Membership is made up of corporations and state legislators, and offers those companies the opportunity to pen favorable legislation that can then be introduced in state legislatures around the country. ALEC’s Chicago conference offers a chance for the two groups to mingle, and for corporate members to make their pitch to legislative members, whose trips to Chicago will be completely covered by ALEC through annual dues (almost 98 percent of which are paid by corporations).

It isn’t that ALEC has created pro-corporate ideas like right-to-work laws or “ag-gag” bills, says Brendan Fischer, general counsel for the Center for Media and Democracy (CMD), the nonprofit that runs ALECexposed.org. “But once a law comes to ALEC, it becomes supercharged, and spreads all around the country,” he says, citing the example of voter ID laws. The first such bill was introduced in 2003, but after ALEC adopted voter ID as a legislative priority in 2009, a slew of similar bills were introduced around the country, with thirty states eventually adopting some form of them.

The CMD has followed ALEC’s activities closely since 2011. In the two years since ALEC’s model legislation was first leaked, forty-nine corporations, including major brands like Walmart, Bank of America, and General Motors, and six nonprofits have disaffiliated with ALEC, along with seventy-four state and federal legislators. Since then, Fischer says, the group has attempted to return to obscurity.

“They’ve been trying to sneak back into the shadows,” he says. “They’re most successful when people aren’t paying attention.” The CMD is currently engaged in a series of legal battles with ALEC over disclosure of correspondence with lawmakers, meeting agendas and model bills. ALEC has claimed immunity from open records laws in states throughout the country, and in some cases has begun e-mailing legislators at private e-mail addresses in an effort to avoid legally compelled disclosure.

High on the agenda for the Chicago gathering, according to a conference agenda the CMD has obtained, is crafting legislation to repeal Renewable Portfolio Standards requiring states to obtain minimum percentages of energy drawn from renewable sources.

Street protests against ALEC like those planned in Chicago directly led to the organization’s exposure two years ago. After University of Wisconsin–Madison history professor William Cronon wrote a blog post examining the organization’s role in providing model legislation similar to the “Budget Repair Bill” pushed by Governor Scott Walker (a former ALEC member as a state legislator) that led to the famous Madison capitol occupation, Midwestern activists organized a protest outside the annual ALEC convention and a series of informational teach-ins in Cincinnati, Ohio. Two hours later, a whistleblower telephoned protest organizer Aliya Rahman, offering access to 800 of ALEC’s model bills.

Since that leak two years ago, and the subsequent investigation by The Nation and the Center for Media and Democracy’s, “ALEC Exposed,” as well as the CMD’s ongoing coverage through ALECexposed.org, the organization has faced intense national scrutiny, drawing protest from a wide variety of progressive groups in cities around the country for their role in writing and promoting a battery of right-wing legislation.

Most recently, the case of George Zimmerman’s killing of unarmed teenager Trayvon Martin has brought renewed attention to ALEC, credited with spreading legislation similar to Florida’s Stand Your Ground law, which helped allow Zimmerman to walk free despite admitting to shooting and killing an unarmed Martin. After Florida’s passage of the law—introduced by former State Senator Durell Peaden, then a member of ALEC—the group worked to expand the law around the country. Nearly half of all fifty states now have similar laws—raising the real possibility of more cases similar to Trayvon Martin’s in the future.

In the two years since ALEC’s model legislation was first leaked, the organization has quickly become toxic, associated with corporate capture of American politics. Still, many politicians and corporations are not afraid to be associated with the group. Big-name Republican lawmakers will be speaking at this year’s conference, including Governor Mary Fallin (OK), Governor Terry Branstad (IA), and former Governor Jeb Bush (FL). And “there is still a core group of highly profitable corporations that appear to plan to continue funding ALEC—the tobacco industry, oil, pharmaceutical industries—as they seem to find the access to legislators that ALEC offers very valuable,” Fischer says.

But it’s clear ALEC has taken a beating in the past two years, and Fischer says more transparency and exposure of the organization—achieved, in part, by protests like those in Chicago—will continue to hurt the organization and its right-wing agenda. “In the past, ALEC had tried to pass itself off as a mainstream organization. The increased transparency over the last year has revealed ALEC for what it really is: a conduit for corporate influences and a right-wing agenda. It seems a sheen of legitimacy has been rubbed off.”

Sharkey, of the Chicago Teachers Union, hopes conference attendees do not feel welcome in the city.

“This is a union town,” Sharkey says. “ALEC’s vision for the future of austerity is profoundly at odds with the social movements that have gathered some real strength in Chicago right now. It takes a lot of gumption for them to show up here.”