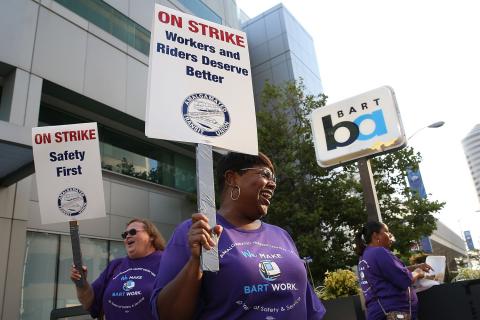 Amalgamated Transit Union workers hold signs as they strike outside of a Bay Area Rapid Transit (BART) station on July 1, the first day of the strike, in Oakland, California. , Justin Sullivan/Getty Images
SAN FRANCISCO -- San Francisco Bay Area commuters got a
reprieve from a potential transit strike when a judge
on Sunday granted California Gov. Jerry Brown's request
for a 60-day cooling-off period in negotiations between
the Bay Area Rapid Transit Agency and two of its
largest unions.
San Francisco Superior Court Judge Curtis Karnow
ordered the unions and BART not to threaten or engage
in a strike through midnight on Oct. 10. BART and the
two unions are expected to continue negotiations while
the injunction is in place.
The strike, or even the threat of one, will "endanger
the public's health safety or welfare," Karnow said in
his order.
During an unusual Sunday morning court session before
the order was issued, Karnow said the hearing had
nothing to do with the merits of the contract dispute
between BART and the unions. Attorneys for the two
sides did not object to the injunction although union
leaders had said earlier that Brown's request reduced
the pressure to reach a deal.
BART spokesman Rick Rice said in a statement that BART
was grateful that Karnow granted the governor's
request. BART made a new contract offer on Saturday in
hopes of reaching a deal before Sunday night. However,
the agency issued another statement late Sunday saying
the two sides remained far apart and that union
negotiators left the bargaining table without
responding to management increasing its wages and
benefits offer "by more than 70 percent since
Thursday."
"There is simply not enough movement from our unions to
indicate we can reach an agreement," said BART General
Manager Grace Crunican. "We will wait for the mediators
to set a new calendar to resume negotiations and do our
best to resolve this before the cooling off period
ends."
Josie Mooney, a chief negotiator with Service Employees
International Union Local 1021, said BART was
presenting distorted numbers to the public and claimed
BART has not made any offers on safety issues.
"I think we're much closer on the economic package than
we were two weeks ago," she said.
The governor indicated he would seek a 60-day
cooling-off period on Friday, as union leaders warned
commuters that they were prepared to strike and shut
down BART on Monday for the second time this summer if
they didn't reach an agreement on a new contract over
the weekend.
The unions went on strike last month, stopping BART
service for four days. The shutdown snarled traffic on
roadways and left commuters facing long lines for buses
and ferries.
BART, the nation's fifth largest rail system, serves
more than 400,000 commuters each weekday.
Sandy Zhou, 22, said her 40-minute commute on BART to
work at a San Francisco Metro PCS store turned into a
three-hour ordeal by bus during the strike. She
applauded the reprieve.
"As long as it keeps the trains running, do whatever
you have to do," she said. "I'm all for higher wages,
but I need to get to work."
Negotiations between BART and Amalgamated Transit Union
Local 1555 and Service Employees International Union
Local 1021 began months ago, but the two sides remained
tens of millions of dollars apart on wages, pensions
and health care benefits last week.
BART said workers from the two unions now average about
$71,000 in base salary and $11,000 in overtime
annually. The workers pay nothing toward their pensions
and pay a flat $92 monthly fee for health insurance.
The unions were set to go on strike again on Aug. 5
when Brown intervened and appointed a panel to
investigate the labor dispute. He issued the request
for the cooling-off period after the panel concluded a
strike would significantly harm public welfare.
Read more here:
http://www.sacbee.com/2013/08/11/5641030/hearing-set-on
-calif-transit-strike.html#storylink=cpy
Subscribe to Portside