Bradley Manning Did Not Hurt the United States

Bradley Manning didn't hurt us any more than a dentist hurts a patient when removing an abscessed tooth. The brief discomfort that resulted from the WikiLeaks disclosures was necessary to begin the process of healing and reform. It is a process that we do not yet know will be successful, but which began with Manning's decision to leak vital documents to WikiLeaks. And for that, we owe Manning thanks; no apologies necessary. 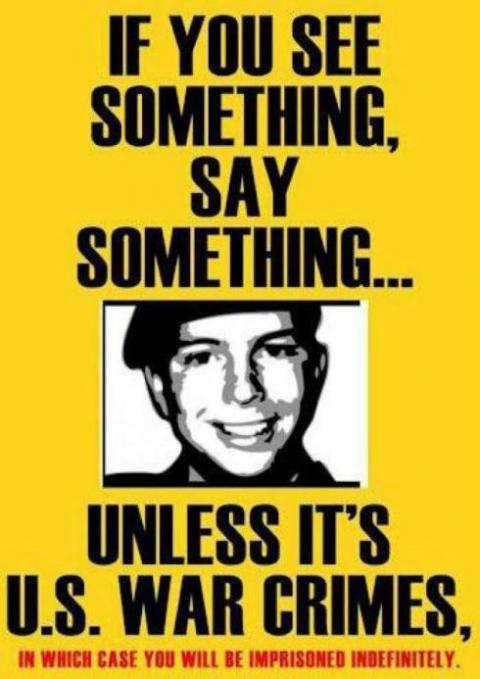 , The Disorder of Things
In his sentencing hearing yesterday, Bradley Manning took the stand and apologized for the "hurt" he inflicted on the United States.
While the legal strategy of Manning's attorney at this point - as it would be for any attorney - is to convince the judge to reduce Manning's sentence as much as possible, the public should know: Bradley Manning didn't actually hurt the United States.
For years now, the government may have attempted to paint a dire picture of WikiLeaks' potential impact, but they've also admitted, quietly but repeatedly, that the results have been more embarrassing than harmful.
Even when the WikiLeaks hysteria was in full swing, government officials from the State Department have briefed Congress on the impact of the Wikileaks revelations, and have said that the leaks were "embarrassing but not damaging." U.S. Vice President Joe Biden said that, while some of the information may have been embarrassing,  "I don't think there is any substantive damage."
Former Defense Secretary Robert Gates has admitted the leaks caused no serious damage, telling Congress that the reactions to the leaks were "significantly overwrought."  He went on to say: "Is this embarrassing? Yes. Is it awkward? Yes. Consequences for U.S. foreign policy? I think fairly modest.''
At the same time, Reuters reported that other officials were admitting in private that they were exaggerating the damage that resulted from the leaks in order to bolster the legal efforts against WikiLeaks and Manning.
This has born out in Manning's trial and sentencing hearing. It's why the government fought so hard to keep its official WikiLeaks "damage assessments" from being revealed in court. It's why, despite all the government's overwrought pronouncements early on of "blood on the hands" of those responsible, a U.S. official was forced to admit under oath in Manning's sentencing hearing that not a single person died as a result of the releases.
The truth is, the public has benefited tremendously as a result of Manning's disclosures to WikiLeaks. Over the least three years, the disclosures have helped shape an international discussion about America's foreign policy. They showed Americans the true face of our wars in Iraq and Afghanistan -- from accurate body counts in Iraq to journalists killed by American soldiers to the government blocking investigations of CIA extraordinary rendition to U.S. turning a blind eye to torture in violation of the Geneva conventions. They've exposed corruption and lawbreaking in dozens of countries around the world. They contributed to democratic movements in the Middle East, and helped spur a movement in defense of free speech online. One State Department cable was even instrumental in helping precipitate the end to the Iraq war.
And to be honest, Manning's disclosures were one of the inspirations in forming this organization.
To this day and no doubt for many years to come, journalists, scholars, and the public are benefiting from new insights into the U.S. government that are a direct result of Manning's leaks.  As Foreign Policy reported earlier this year, the WikiLeaks cables Manning leaked "have become one of the vital tools of international journalism. Nearly every day, newspaper, wire service, and magazine dispatches from around the world feature the remarkable but no longer unusual phrase, `according to classified State Department cables released by WikiLeaks.'"
Vanity Fair reporter Sarah Ellison may have summed it up best when she wrote the State Department documents Manning leaked "are as revealing as the Pentagon Papers, but their quantity and range are incomparably greater."
The disturbing truths about our own nation's manipulations and abuses around the world may have been uncomfortable, sobering, and embarrassing. But many times it's important for Americans to see the truth about our country - from the shocking horror of an Apache helicopter gunning down Reuters journalists to the clinical descriptions of low-level detainees held for over a decade in Guantanamo.  We should know, on the most intimate terms, how our own country is conducting affairs in our name.  We should know these things even -- perhaps especially -- if that knowledge is deeply disturbing.
Bradley Manning didn't hurt us any more than a dentist hurts a patient when removing an abscessed tooth. The brief discomfort that resulted from the WikiLeaks disclosures was necessary to begin the process of healing and reform. It is a process that we do not yet know will be successful, but which began with Manning's decision to leak vital documents to WikiLeaks. And for that, we owe Manning thanks; no apologies necessary.
[Rainey Reitman serves as director of the activism team at the Electronic Frontier Foundation. She is the Chief Operating Officer and co-founder of the Freedom of the Press Foundation, a nonprofit organization that defends and supports unique, independent, nonprofit journalistic institutions. She, along with co-founders Daniel Ellsberg, Trevor Timm, and J.P. Barlow, received the 2013 Hugh M. Hefner First Amendment Award in Journalism.
Reitman is a founder and steering committee member for the Bradley Manning Support Network, a network of individuals and organizations advocating for the release of accused WikiLeaks whistleblower Pfc. Bradley Manning. Additionally, Reitman serves on the board of the directors for the Bill of Rights Defense Committee, a nonprofit whose mission is to organize and support an effective, national grassroots movement to restore civil liberties guaranteed by the Bill of Rights. She is also a steering committee member of the Internet Defense League, a netroots coalition working to fend off threats to the free and open Web.
Prior to joining EFF, Reitman served as Director of Communications for the Privacy Rights Clearinghouse, a nonprofit advocacy and education organization promoting consumer privacy. She earned her BA from Bard College in Multidisciplinary Studies: Creative Writing, Russian & Gender Studies.]