Kelly, the district’s largest school, also took the biggest budget hit for what CPS called a projected enrollment drop of 200-250 students, though CPS still considers it overcrowded as well. The school has laid off 23 teachers, 10 support staff and will also lose seven security guards, as well.“Our enrollment is supposedly down, which is why they explained the $4 million in cuts, but apparently we need new schools,” said Carolyn Brown, one of the teacher representatives. 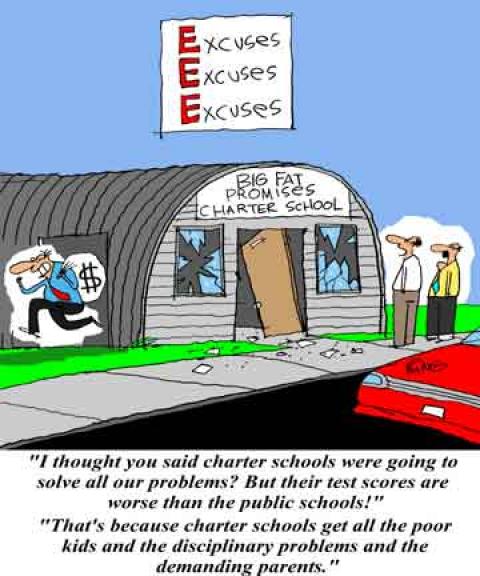 As Chicago Public Schools officials finish shuttering a record number of schools and leave many neighborhood schools to open their doors in two weeks with diminished budgets, the district has quietly issued a call for new charter schools.

In a 52-page PDF posted without fanfare on the district’s website, CPS is asking for new charter operators and campuses for the 2014-15 and 2015-16 school years mainly — but not only — in 11 so-called “priority communities” on the Northwest and Southwest Sides where district-run schools have been complaining of overcrowding.

“The focus of this year’s (request for proposals) is to address communities that are experiencing overcrowding, which is a separate issue from underutilization,” CPS spokeswoman Keiana Barrett said, adding that the call for charters is one strategy proposed to help with overcrowding. Others, as laid out in the city’s 10-year Educational Facilities Master Plan, advises redefining attendance area boundaries, building annexes, or building new facilities, but the district’s finances are tight, Barrett said.

“However, we need to pursue all options throughout all geographies since we can’t simply build our way out of the overcrowding challenges on the Southwest and Northwest,” sides, she said.

CPS has not specified in its request nor to the Illinois Network of Charter Schools how many charters it seeks to add to a roster of more than 125 charter campuses open and operating as of the first day of class .

In May, the Board of Education voted to shutter a record 50 neighborhood schools, mainly in impoverished South and West side neighborhoods, 48 of which closed their doors for good in June. And all summer, neighborhood schools have been grappling with CPS’ new budgeting system, which many say leaves them with big budget cuts and forces layoffs. Many of the pink-slipped teachers taught the arts or music, according to the Chicago Teachers Union, though CPS says the bulk of them could be rehired.

“CPS must provide every student in every community access to a high-quality education that prepares them for college, career and life,” district spokeswoman Becky Carroll said in an emailed statement.“Our goal is to seek out potential proposals to create more high quality school options for parents, and this is merely one step in that process.”

And all applicants must hold a community meeting with a Neighborhood Advisory Council made up of local parents, community-based organizations, businesses and political offices, according to the request.

Wendy Katten, head of the parent group Raise Your Hand, has been rallying in support of neighborhood schools throughout the contentious closing process and budget rollouts.

“Some of these priority areas had schools originally on the closing list,” Katten said, citing Pilsen and Logan Square which CPS says need more elementary schools. “I agree with consulting stakeholders and taxpayers on what kind of schools they want in their community, something this administration has no interest in doing.”

The district also seeks several “priority models” of charters schools: Next Generation schools — such as the Intrinsic Charter School set to open this fall — that blend online learning with classes in brick-and-mortar buildings; Arts Integration schools — such as Chi Arts High School — that infuse fine arts into core subjects such as math and reading; Dual Language models that prepare graduates to read, speak and write well in English and a second language; and Humanities Focused models, new to the district, that center around humanities and social sciences.

“New schools should embody the five pillars that CPS believes will help increase graduation rates, academic preparedness for college and career, entry into college, military and employment, and persistence and success in college and employment,” the request for proposal reads.

The district will also accept traditional charter applications, and all proposed schools also should plan to find their own buildings, according to CPS.

That alone is a massive challenge, said Andrew Broy, president of the Illinois Network of Charter Schools. Schools in these neighborhoods — Sauganash, Little Village, Albany Park — are already crowded so there aren’t empty buildings sitting around.

“If they can’t find a building, it doesn’t become a reality. Catholic schools remain viable options to bursting public schools, and parents continue to pay parochial school tuition there.

“These neighborhoods are on the Northwest and Southwest sides of city, which haven’t seen a ton of charter school growth traditionally,” Broy said. The district seems to be using charters as “a pressure valve to enhance capacity where schools are overcrowded. ... The focus in this city has been on locating charters where there aren’t quality school options. This is a different strategy. Current charter schools need to think about what their strategy is, and given tougher funding challenges, this is a tougher sell.”

Kelly, the district’s largest school, also took the biggest budget hit for what CPS called a projected enrollment drop of 200-250 students, though CPS still considers it overcrowded as well. The school has laid off 23 teachers, 10 support staff and will also lose seven security guards, as well.

“Our enrollment is supposedly down, which is why they explained the $4 million in cuts, but apparently we need new schools,” said Carolyn Brown, one of the teacher representatives on Kelly’s Local School Council. “Apparently there’s enough kids for a new charter.”

The Brighton Park neighborhood, in CPS’ McKinley Park area, has lost some $7.5 million in budget cuts due to projected enrollment drops, she said.

“I don’t see what the justification would be for bringing in more charter schools.”

On the relatively affluent Far Northwest side, Wildwood Elementary School, 6950 N. Hiawatha Ave., is bursting. The K to 8 school of about 415 is considered by CPS to be at 175 percent capacity, so the school’s principal, a member of the Local Schools Council and Ald. Mary O’Connor (41st) have asked the Board of Education for help alleviating the overcrowding.