Review: Yes! This ‘Butler’ Did It 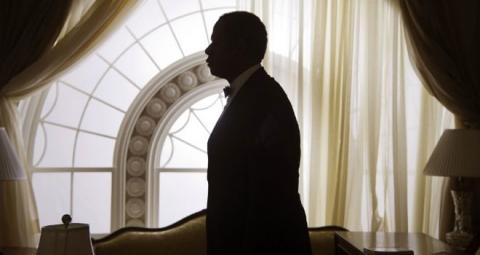 [For a subsequent exchange between Cusey and conservative critics of The Butler, go here. -- moderator]

Lee Daniels’ The Butler succeeds because it focuses on people and resists becoming the political message screed some wanted and some feared.

In telling a simple story of an American family, it becomes more powerful than any screed could have been.

Starring Forest Whitaker as long-serving White House butler Cecil Gaines and Oprah as his wife Gloria, the movie embraces a family beset by joys and sorrows like any family, defined more by their love and loss than by the racial epitaph some would use to define them.

More than anything, the film succeeds because it captures the tension of being black in America in the 20th century: To serve or fight? To smile or resist?

In a particularly brutal opening sequence, a young Gaines is subjected to the rape of his mother and murder of his father on the cotton farm in Georgia. This victimization become the very roots of future success: In a harsh and unsatisfying sort of atonement, the lady of the house (Vanessa Redgrave) brings the orphan inside and teaches him how to be a "house n****."

Through this training and through future jobs, Gaines learns how to lay a table, mix a drink, banter lightly and nonthreateningly with the white clientele, and to anticipate their every desire. Above all, he learns the attitude. He must make the room seem empty even when he is in it. His skill leads him to a position at the White House, which he fills from the Eisenhower administration to Reagan.

This constitutes the first great tension of Gaines’ life. He is good at his job. He actually loves his job and takes pride in it. However, the simple act of being good at a service job means that a black man must render himself nonthreatening and subservient. He must smile and please, even as white men are discussing the suppression of his race over the highballs he has mixed for them.

For Cecil Gaines, the chance to be the best at something, the chance to do something he is good at, the security of knowing no one is going to shoot him in cold blood, and the ability to provide a better life for his children takes some of the sting out of the insults. He is not seething with rage. He enjoys his life. He is even proud of his life.

He is beating them at their own game. He is a man. He would make his murdered father proud.

But not everyone sees it that way. As the Gaines family makes its way through the 1950s and 60s in Washington DC, his son Louis (David Oyelowo) chafes under blatantly unfair racial discrimination and is drawn to Civil Rights activism. His father may be content to serve soup and become invisible, but Louis wants to make some noise.

He joins the Freedom Riders, in effect rejecting and sabotaging everything for which his father has worked so devotedly. His brother (Elijah Kelley) chooses a path more in line with their father.

The movie is really a story about the generation gap of the 1960s, this time in African-American community. All three stories are American stories and the movie does not take sides between them. It respects all of the characters, their history, and their choices.

Oprah brings joy, vivaciousness, and sorrow to the screen as the matriarch who sees her family and her own heart torn up by this great divide.

Seriously, Oprah is pretty darn good in this film.

Perhaps the strongest and most subversive scenes of the film are Oprah’s: Sitting on the porch bantering with the neighbors, drinking cocktails with girlfriends as the men play cards, sending her son off to college, dancing to disco in the living room wearing an outrageous bodysuit.

Those scenes bring home that these characters are not symbols, they are not archetypes. They are people living their lives through the decades. They are not reduced to mere victimhood, but live richly even as they are denied full access to society.

Oprah’s Gloria Gaines is the flip side of Mad Men’s Betty Draper. This is what is happening in DC while Don Draper and his buddies scheme on Madison Avenue.

The strength of this film is that it is Cecil and Gloria’s story, not the White House’s story. The presidents come and go, touching Cecil briefly but powerfully. He is drawn to Kennedy’s passion but sees him in his weakness. LBJ is a political friend to African-Americans, but is boorish in home life. Reagan is drawn as opposed politically to black interests, but personally committed to justice and equality at his White House. For those concerned, Jane Fonda does well as Nancy Reagan, ironically, but I had more trouble with Alan Rickman as Ronald. He did a good job, but every time he talked, I heard Severus Snape.

Viewers will read whatever political messages into the film they wish to see, but it is Lee Daniels’ skill that he briefly sketches each president as a man first and a political force second. As a conservative, I disagreed with some of the assessments the African-American characters make, as I likely would with the counterparts in real life, but I did not feel the movie was bashing particular people or ideas.

Except Nixon (John Cusack in a prosthetic nose). It was pretty hard on Nixon.

More than anything, I was moved by this film, as I was by Daniels’ Oscar winning and brutal Precious. I laughed, I teared up. I -- dare I say? -- related.

I saw myself in these characters whose experience is so different from mine. And that is more powerful than any message could ever be.

Lee Daniels wants to tell real stories, true stories, of his people, not hammer home messages. It was beautiful to see black faces on the screen showing all the richness, sorrow, depth, and joy of human hearts.

We need more of this in America.

Rated PG-13, this movie has intense themes including racial themes, adultery, and alcohol abuse. It is light on language except the repeated use of the n word. There is no overt sexuality but there is implied sexuality both in and out of marriage (but it’s considered bad out of marriage.) It has a particularly disturbing sequence at the beginning involving an implied rape and a murder, plus a disturbing scene of bodies hanging after a lynching. The could be great value in parents taking tweens and teens to it, but they should consider their children carefully.

The story of Lee Daniels’ The Butler is only loosely based on the real life Eugene Allen. His childhood is altered and the story of his sons completely altered. Washington Post reporter Wil Haygood wrote a profile of Allen: “A Butler Well Served,” and a book on the man: The Butler: A Witness to History.