Only a Peace Conference, Not Air Strikes, Can Stop Further Bloodshed

Governments in Washington, London and Paris should realise that in one respect the slaughter by chemical weapons of hundreds of people in Damascus on 21 August is an opportunity as well as a crime. It is an opportunity because the chemical weapons atrocity and the crisis it has provoked show that the Syrian civil war cannot be left to fester. The use of poison gas is the grossest sign, but not the only one, that the level of violence is spiralling out of control. 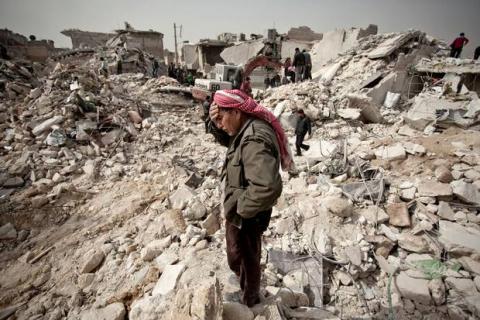 A Syrian man reacts while standing on the rubble of his house while others look for survivors,

American, British and French air strikes by planes or missiles look probable in retaliation for the  alleged use of poison gas by the Syrian army against people in rebel-held areas of Damascus. Controversy rages about whether or not this is the right thing to do, an argument coloured by memories of official mendacity over Iraqi Weapons of Mass Destruction in 2003 and Nato's destruction of Muammar Gaddafi's regime in 2011 under the guise of a limited humanitarian operation.

What armed intervention by foreign powers in Syria will not do is bring an end to the present bloody stalemate in the two-and-a-half-year-old civil war. But governments in Washington, London and Paris should realise that in one respect the slaughter by chemical weapons of hundreds of people in Damascus on 21 August is an opportunity as well as a crime.

It is an opportunity because the chemical weapons atrocity and the crisis it has provoked show that the Syrian civil war cannot be left to fester. Previously, there was a shallow belief that, like the 15-year-long Lebanese civil war between 1975 and 1990, the Syrian war was basically containable. This hope has ebbed over the past year as sectarian and ethnic violence in Syria has spread to Lebanon and Iraq. The use of poison gas is the grossest sign, but not the only one, that the level of violence is spiralling out of control inside Syria.

While the world has been focusing on the horrors in Damascus over the past week, anti-government rebels have been carrying out a campaign of ethnic cleansing against Syrian Kurds in the north-east of the country, forcing 40,000 of them to flee across the Tigris into northern Iraq in less than a week. So many are trying to escape in what the United Nations says is the biggest single refugee exodus of the war that the pontoon bridge across the Tigris they were using is near collapse and has had to be closed, trapping tens of thousands of terrified Kurds inside Syria.

The sense of urgency among foreign powers generated by the present crisis should be used to launch the much-delayed peace negotiations in Geneva. A peace conference between the warring sides was proposed by the US and Russia in May, but has been repeatedly postponed. It is unrealistic to imagine for now that negotiations between people whose prime aim is to kill each other will lead to any long-term political solution for Syria. The priority should rather be to prevent the continuing escalation in the violence and the further disintegration of Syrian society.

A ceasefire is the greatest need, in which  power-sharing would be geographical with each side holding the territory it controls. Such a truce should put in place and monitored by UN teams. It might not cover all the country and would no doubt be frequently breached, but it would be better than the present bloody anarchy. There were hundreds of ceasefires during the Lebanese civil war and they were regarded with cynicism by the Lebanese, but thousands more people would have died without them.

Why has a peace conference not happened before? Within Syria the main reason is that government and opposition each believe they can still win and do not contemplate sharing power with anybody.

President Bashar al-Assad's forces have made limited advances since they captured in June the strategic rebel stronghold of Qusayr outside the city of Homs, 100 miles north of Damascus. Most important, Assad's foreign allies - Russia, Iran and Hezbollah in Lebanon - have stood firm and shown that they are not going to allow him to be defeated.

The rebels do not want to negotiate with government in part because they are so fragmented that they would find it difficult to agree a negotiating team which represented the different strands of opposition. There are 1,200 different rebel military units in Syria by one estimate, varying in size from family bands of a few dozen fighters to small armies of well-organised and heavily armed militiamen deploying tanks and artillery.

The most powerful of the latter are the al-Qa'ida-linked al-Nusra Front and the Islamic State of Iraq and the Levant. Speaking of the Free Syrian Army, to which the US and its allies may send arms, a diplomat in Damascus expressed, saying: "How can they support the FSA, which doesn't really exist inside Syria as an institution with any command and control?"

Ever since a peace conference was first mooted there has been a strong element of hypocrisy in the Western approach. At first, Britain, among others, said that President Assad would not be part of any political transition in Syria and there were propagandistic discussions in the foreign media about where he and his family might seek refuge.

This was at a time he controlled all 14 Syrian provincial capitals (he has since lost one, Raqqa, to jihadi groups). The US is generally negative over whether Iran could attend a peace conference, as Russia insists, though negotiations which exclude any major player in the Syria crisis are not going to achieve anything.

Could the US and Russia force their respective allies to attend a peace conference, negotiate seriously and at least agree to a ceasefire? The chances here are better than they look because both the Syrian government and the opposition wholly depend on outside military and financial support. Look how quickly Assad agreed to the UN chemical weapons inspection team being allowed to enter rebel areas in Damascus when Russia and Iran insisted that he should do so. Given the current chaos, the sniping at UN vehicles was predictable.

There is greater pessimism about the opposition having the coherence to negotiate and agree to anything. They continue to hope that the US and its allies will be finally forced to intervene militarily and they will be able to advance under an American air umbrella, like the opposition Northern Alliance in Afghanistan in 2002 or the Libyan militiamen in 2011.

One of the dangers of the air strikes now being considered by the US is that, unless they are accompanied by a fresh drive towards a peace conference, the opposition thinks it is half way to getting the Western powers to win the war for it. Nevertheless, the opposition can be pressured by their foreign backers, supposing they wish to do so.

Peace conferences have the best chance of succeeding when one side knows it has won and wants to formalise its victory while the defeated want the best terms possible. Alternatively, peace negotiations may be productive when both sides are exhausted and come to realise they are not going to win a complete victory. The danger of supplying more weapons to the opposition is that it is not going to enable them to win but will simply fuel the level of the fighting.

Syria has a failed government and a failed opposition. As the country disintegrates it is being overrun by warlords with no interest in peace. "They stole all our things, our home, our possessions so even the children start to hate life," lamented one Syrian Kurdish refugee fleeing to Iraq this week. Another talked about those who had driven her from her village: "We don't know them. They just come, take power and give themselves  a name."