Remember When People Had Pensions?

How’s your 401(k) doing? Working Americans ask themselves this question — and angst about the answer — a great deal these days. Any why not? For most Americans, retirement reality has turned chillingly stark: Either you have a robust set of investments in your 401(k) or you’re facing a rocky retirement. 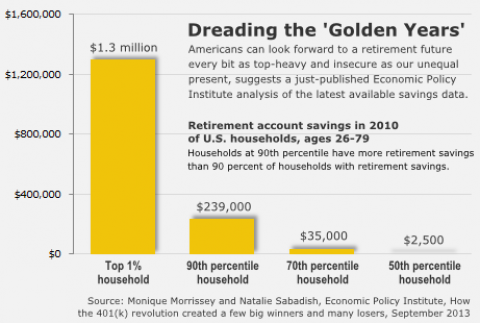 America's corporate chiefs deserve all their hefty rewards, we're told, because they take hefty risks. And what exactly are these richly rewarded corporate chiefs putting at risk? Our retirement security.

Working Americans ask themselves this question -- and angst about the answer -- an awfully lot these days. Any why not? For most Americans, retirement reality has turned chillingly stark: Either you have a robust set of investments in your 401(k) or you're facing a rocky retirement.

A generation ago, working Americans didn't have to obsess about retirement savings accounts. Americans had pensions, not 401(k)s. These pensions represented a commitment from employers to workers: You work here a set number of years, you can count on a monthly pension at a set amount.

In these traditional pension plans, the risk rested with employers. They shouldered the responsibility for funding a pension plan's "defined benefits."

With 401(k)s, employees have no promised "defined benefit." Their future retirement income depends on how well their 401(k) investments end up doing, not how long and how diligently they work over the course of their careers.

In other words, the retirement risk has shifted, from employer to employee.

Our current 401(k)s actually began their existence in the 1980s as a supplement to traditional pension plans. But America's top corporate execs would quickly come to see these 401(k)s as a cheaper -- for employers -- substitute.

Between 1990 and 2010, the share of America's private-sector employees in traditional pension plans fell by nearly half, from 42 to 22 percent. Just about exactly 50 percent of private workers now sit in 401(k)-type arrangements.

"Retirement insecurity," write the two authors of the new EPI study, economists Monique Morrissey and Natalie Sabadish, "has worsened for most Americans as retirement wealth has become more unequal."

At first glance, the basic retirement savings stats seem to show a much cheerier story. Total retirement assets -- both in America's remaining traditional pension plans and in 401(k) and related retirement savings account plans -- have soared since the late 1980s, tripling, after adjusting for inflation, to over $15 trillion.

But precious few of these trillions are bolstering the retirement security of average Americans. Nearly half of U.S. households today have no savings in any retirement accounts at all. For Americans in the other half, EPI economists Morrissey and Sabadish show, savings have become "very unevenly distributed."

Among America's most affluent 20 percent, 88 percent have savings sitting in a 401(k) or similar retirement savings account. The savings in the accounts of these affluent averaged $308,674 in 2010, the most recent year with data.

In America's statistical middle class, by contrast, a totally different reality. Only 52 percent of Americans in the middle fifth of the nation's income distribution have savings in retirement accounts, and these accounts average only $34,981.

And in America's poorest fifth, an even bleaker retirement outlook. Only 11 percent of Americans in this fifth have any 401(k) savings, and these savings average just $7,543.

These unequal outcomes should surprise no one. Participants in 401(k)-type plans have to contribute to participate. In an era of shrinking real paychecks, many employees simply can't afford to set aside much if any money in the 401(k) plans that might be available to them.

The dollars America's highly paid set aside in their 401(k)s, in turn, go on to benefit from both the standard employer's 401(k) matching contribution and the tax breaks that all 401(k) savings enjoy.

We have moved, in short, from a traditional pension system where "many retirees could count on predictable, constant streams of income," as the new EPI study notes, to a system where most Americans can't afford to retire.

In the meantime, many of the same corporate execs who've cut back on traditional worker pension coverage are spearheading the charge for federal budget cutbacks in Social Security.

Last fall, the Institute for Policy Studies looked at the 71 big-time CEOs pushing the "Fix the Debt" campaign to trim Social Security and other major federal "entitlement" programs. These 71 top execs have accumulated, on average, $9 million each in their own personal company pension plans.

A dozen of these CEOs have over $20 million in their pension accounts.

If at age 65 these dozen converted their assets to an annuity, the Institute for Policy Studies researchers note, "they would receive a monthly check for at least $110,000 for life."