Thousands of protesters took to the streets across France on Tuesday for a nationwide day of industrial action to protest against controversial planned pension reforms. 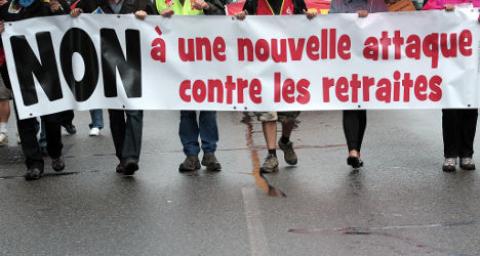 Protesters against pension reforms in Strasbourg on Tuesday. , Frederick Florin/AFP

French unions took to the streets on Tuesday in protest against another proposed overhaul of France's debt-ridden pension system, but no big disruptions were reported over a reform generally regarded as moderate.

Four hardline unions called for protests Tuesday in 180 locations across the country, but moderate unions did not back the call, saying they hoped to seek changes in parliament.

In the western city of Nantes, police said 4,500 protesters marched in the streets, while the CGT union said 8,000 demonstrated.

Protests also took place in other cities around the country, as well as in France's Indian Ocean Reunion island.

In Paris, the FO and CGT unions will march together in the afternoon.

One union repo Jean-Marc told The Local: "Why do the French always march? Because these days, If we don't we'll lose."

The organisers of the demonstration, including unions and far left political parties, have called on workers to mobilise against reforms they see as plainly unfair for the majority.

Jean-Luc Jibelin from France's Communist Party told The Local the reforms would spell "disaster" for a lot of French workers.

"This project of reform does not correspond at all to the expectations of the French people," he said. "The reforms mean that many young people will simply not be able to qualify for the maximum pension. That is not real social progress."

The day of action will see nearly 200 protests across the country involving members from a number of leading trade unions including the CGT, which is also calling on workers to protest over "pay and jobs" as well as "the right to a pension".

France's rail operator SNCF says it will post regular updates of any disruption to services caused by the strike on its website, but transport bosses in Paris are confident the capital's rail network will not be affected.

TGV is expected to run as normal except for on the TGV Atlantic line but Intercity trains are set to be disprupted with only one in two trains running on certain lines.

France is under pressure from Europe to plug holes that will see its generous state pension scheme fall more than E20 billion ($27 billion) into the red by 2020.

The government proposes that employees as well as businesses pay more every month to France's retirement system, a measure sure to raise eyebrows, given the existing cost of France's social safety net, already one of the highest in the world.

The plan would also incrementally raise a French worker's contribution period from the current 41.5 years to 43 years, by 2035.

The question of pension reform has dominated the French media for recent weeks and has seen the country's polling agencies working overtime to come up with every kind of survey related to the issue.

Two recent opinion polls suggest the majority of French people might be in the mood to revolt.

One published on the eve of Tuesday's strike revealed 61 percent of the public are backing protestors and another showed the issue was a real worry for most people with 80 percent of respondents saying they were concerned about their pensions.

'The Socialists are proposing the same thing as the Right'

Organisers of Tuesday's march have pounced on the surveys to show the extent of opposition towards the government's plan.

"It's not just the political left who are mobilising against this reform. 80 percent of people are worried about their pensions. There is a real concern out there and it's because of this that we will be on the streets.

The Socialist government's reform is basically the same as what the Right proposes, and that is to make people contribute for longer," Jibelin said.

He dismisses the concerns of the EU and other economic commentators from both inside France and abroad, who say the reforms are urgently needed to help cut the debt.

"France has money. At this moment in time it is not bankrupt. It is just a question of choice about who the government makes pay for this debt," he said.

The last time pension reform was on the table, under former President Nicolas Sarkozy's government, France witnessed one of the biggest street protests in recent years.

However, after current Prime Minister Jean Marc Ayrault decided against raising the pension age, some unions decided not to call their members to join the walk-out, meaning Tuesday's demo is unlikely to be on the scale of 2010.

However, Jibelin stresses this is only the beginning.

"When people think of 2010 they just remember the last street protest, which was the biggest. But it started with other smaller protests. Tuesday is just the first," he said.

France is well-known for its enthusiasm for street protests and strikes and we are not just talking about the 1789 Revolution.

In recent years there have been several major social movements that shocked the country. CLICK HERE to look back at five of the biggest.