In signing a bill that will raise California's minimum wage to $10 an hour by 2016, Gov. Jerry brown said it was his “moral responsibility” to give Californians a chance to earn a living wage. 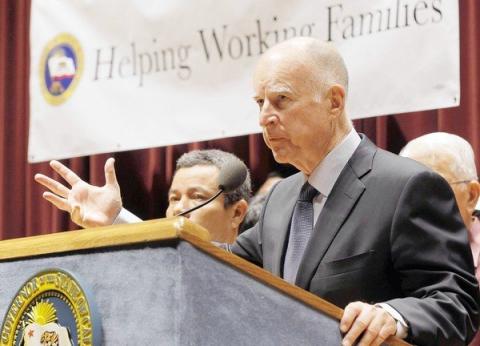 Gov. Jerry Brown signed into law a bill that will raise California's minimum wage to $10 an hour by 2016, a move celebrated by workers but criticized by many businesses.

Brown put his name on the legislation at the Ronald Reagan building in downtown Los Angeles, surrounded by beaming workers and under a banner that read, "Helping working families."

The governor said it was his "moral responsibility" to give Californians a chance to earn a living wage.

"Our society over the last 30 years … has experienced a growing gap between those who do work at the bottom and those who occupy the commanding heights of the economy," he said.

Brown described the wage increase as a way to help narrow the gap between the rich and poor.

"This is about the social fabric and harmony of Los Angeles and California," he said. "And the minimum wage will set the floor as the ceiling keeps getting further and further apart."

The wage hike will be a big help to workers such as Oscar Sanchez, 29, who wipes down cars at a south Los Angeles carwash.

Sanchez said he earns about $500 a week, and scrimps to make ends meet. He plans to send whatever extra money he earns to family in Guatemala.

"It will definitely benefit workers like me," Sanchez said. "We can do more for our families."

But the bill, known as AB 10, had faced vocal opposition from many companies.

A coalition of employers, including the California Restaurant Assn. and the California Chamber of Commerce, said small businesses cannot afford to pay more. The coalition also said the new law could backfire by forcing companies to raise prices, cut worker hours or even lay off some employees.

"Small business owners' hopes have once again been dashed with a stroke of Gov. Brown's pen," said John Kabateck, executive director of the National Federation of Independent Business in California. He said the new law "will only cement California's status as the worst place to start a business."

Some Southland companies were already fretting about the squeeze on their bottom lines.

Sunder Ramani, general manager of Westwind Properties, a real estate firm in Burbank, said he typically hires about four students over the summer to help out in a warehouse. But after the minimum wage edges up to $9, he said, the firm probably will hire fewer students next summer.

Ramani is also worried his 15 full-time employees will ask for raises. They all earn more than the minimum, he said, but when pay goes up "there is a natural push to pull all wages higher."

"We don't have the scale to pay unlimited dollars," he said. "You have to be very frugal."

Many economists say both sides of the debate are overblown in their predictions: The wage hike will not be a huge boon to the economy, or cripple still recovering businesses.

"There are a lot of folks out there who have sort of a knee-jerk to minimum wage laws," said Chris Thornberg of Beacon Economics. "But you would be hard pressed to find the negative impact" of the wage increase.

And that was what Brown argued after signing his name on the bill.

The governor said that businesses cannot prosper at the expense of their workers. And for consumers, paying a little more for goods and services was worth the trade-off of giving workers a wage they can live on, he said.

"When you chew on a hamburger or get your car washed, you may pay a few more pennies," he said. "How many hamburgers does it take to raise the minimum wage next year by a buck? Not too many."