US Atomic Bomb Detonation Avoided by 'The Slightest Margin of Chance' 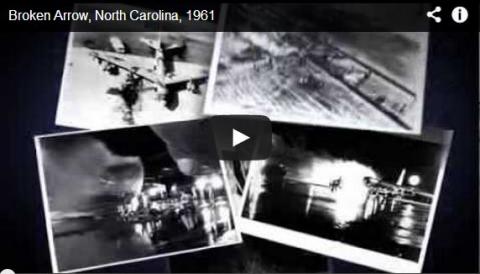 New evidence has emerged confirming that the US came just one safety switch away from detonating a hydrogen bomb over North Carolina that was 260 times more powerful than the "Little Boy" bomb that destroyed Hiroshima.

Previously unseen video footage involving some of the country's top nuclear weapons safety experts, together with documents that have never before been made public, reveal that senior US officials were fully aware that the country came to catastrophe in January 1961 when a B-52 bomber accidentally dropped two Mark 39 hydrogen bombs over Goldsboro, North Carolina.

The knowledge went as far up the chain as the then defence secretary Robert McNamara, who according to a top-secret document told Pentagon officials in 1963 that "by the slightest margin of chance, literally the failure of two wires to cross, a nuclear explosion was averted".

The new video footage and documents were obtained by the investigative journalist Eric Schlosser while researching his new book Command and Control, which chronicles America's nuclear weapons experience. Last week the Guardian published for the first time a secret document acquired by Schlosser that proved that America was spared a disaster of monumental proportions by just one low-voltage switch.

The newly revealed video is taken from a longer documentary called Always-Never: The Quest for Nuclear Safety, Control, and Survivability, which was produced in 2010 by the Sandia National Laboratories, the agency charged with ensuring that the US nuclear weapons stockpile remains safe and secure. Created for internal viewing within Sandia, marked "Official Use Only" and never released to the public, the film uses animation vividly to recreate the events of 23 January 1961.

A B-52 bomber flying a routine run along the north-east coast of the US got into trouble after it refueled in mid-air. The boom operator of the fuel tanker noticed pink fluid leaking from the bomber's right wing, and soon after the wing ripped off, sending the plane into a spin.

The video then shows, in animated form, the atomic bombs being separated from the B-52 and falling to ground over Goldsboro. In the case of one of the bombs, it behaved exactly as it was designed to do should it have been dropped as an act of war.

As Dan Summers, one of Sandia's nuclear weapons safety engineers, recalls in the film: "The weapon dropped, power was now coming on and the arming rods had been pulled, the barrel switches began to operate, the next thing was for the parachute to deploy." Crucially, Summers adds: "When it hit the ground it tried to fire."

There was only one safety device left between the bomb and disaster: a switch known as a pre-arming ready-safe switch that could turn the bomb on and off through the normal operation of a 28-volt signal sent from the B-52's cockpit. But even that switch was known by nuclear safety experts to be deeply unreliable.

"Unfortunately, there have been thirty-some incidents where the ready-safe switch was operated inadvertently," notes Charlie Burks, a former Sandia nuclear weapons systems engineer. "We are fortunate that the weapons involved at Goldsboro were not suffering from that same malady."

Schlosser told the Guardian that the significance of the video was that it "conclusively establishes that the Sandia weapons lab itself was concerned about the risk of accidental detonation. Their own experts said that disaster was prevented by a single switch that they knew to be defective."

Further detail on what happened to the Mark 39 bomb when it fell over Goldsboro is given in a newly declassified document written in 1987 reviewing the US nuclear weapon safety programme. It records that as the B-52 broke up, the pin to arm the bomb that was normally manually operated was yanked out as it fell, thus arming it.

All the various stages of the bomb's fall – the operation of the arming system, deployment of the parachute, timer operation, activation of its batteries, and delivery of the signal that would actually fire the bomb at impact – "all followed as a natural consequence of the bomb falling free". Only the lack of engagement of the final ready-safe switch "prevented nuclear detonation of this bomb".

Despite such expert awareness of the extremely tentative safeguards that stood between America and unthinkable disaster, successive US administrations kept up the line in public that the country's nuclear arsenal was free from any risk of accidental detonation.

The Sandia film ends on an ominous note. As the camera pans over the wreckage of a military plane strewn over a valley, the narrator remarks that "unfortunately there was no shortage of new data, as the accidents continued".