If there's a grand coalition between the CDU and the Social Democrats, current laws mean that Die Linke and the Greens wouldn't be able to challenge the government's legislation 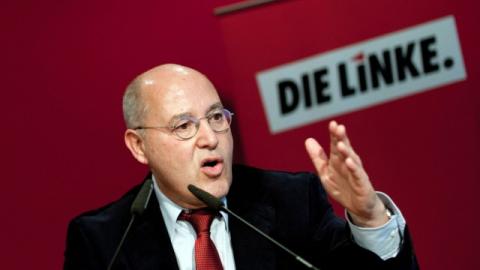 In several respects Germany's general election has produced a historically remarkable outcome. Contrary to what it may first look like, it is a result that will have direct consequences for Europe too.

At first sight, it appears as if last Sunday produced a smash-and-grab triumph for Chancellor Angela Merkel, confirming her politics and her role in Germany and Europe. But once you look more closely, you realise that the CDU and CSU don't have a majority to continue their political pathway of old. Because with the Free Democratic party – and this is truly historic – we saw a party being voted out of parliament which has had a seat in the Bundestag since 1949. Merkel has lost the junior partner who used to give her a majority.

This is also the reason why we now have a majority to the left of the CDU/CSU in parliament, however slim it may be. The Social Democrats (SPD) and Greens managed to get a majority from 1998 to 2005, but since then, one thing has become clear: the SPD will only be able to get one of its people into the top seat if it forms a coalition with my party, Die Linke (The Left).

In 2013, Die Linke became the third-strongest political entity in Germany. Modern German politics is unthinkable without a proper leftwing party, and we certainly won't go away voluntarily. With this election, Germany has finally caught up with normal European standards in this respect – this too is a historic moment.

The realisation that the Social Democrats need to change their attitude to Die Linke is gradually dawning on its party members. Its leadership can no longer suppress this debate. If the SPD and the Greens really mean what they said in their election manifestos, they should at least seek to enter a conversation with Die Linke. Resisting such calls will only leave voters disappointed and their credibility in pieces.

But even if it doesn't form the next government, the potential red-red-green majority will force Merkel to make concessions. Whoever ends up in bed with the CDU, a left-of-centre majority will remain as a threat in the background and influence European policy.

The Social Democrats and Greens may have helped usher through the bailouts that helped only the banks, investors and hedge fund managers in the last term, driving up government debt and forcing extreme austerity measures on countries in southern Europe. But unless they want to lose their credibility completely, they will need to change their emphases to an active programme for growth in the south of Europe. Without such a European "Marshall Plan" these countries will end up defaulting on their debt – which would have consequences for Europe too.

In addition, Merkel will be warned by the anti-euro Alternative für Deutschland nearly making it into parliament. It is evident that her European "rescue" policy is damaging the European idea to such an extent that such anti-European parties can gain ground.

The final historical aspect of this election may only be realised during the coalition negotiations. If there is a grand coalition, we will have a parliamentary opposition without any rights. With only 127 out of 630 seats, the current parliamentary laws mean that Die Linke and the Greens wouldn't be able to challenge the government's legislation, either with a complaint of unconstitutionally, a commission of inquiry or a parliamentary hearing.

The only comparable instance in the history of Germany's federal republic was when the Free Liberal party was alone in opposition against a grand coalition in 1966 and 1969.

If such a scenario becomes reality, Europe will be watching with interest how serious Germany is about democratic principles, especially since my country enjoys lecturing other nations when they ignore the needs of minorities. Europe's largest country can't afford to have democracy without serious debate. This is why my party will push to find ways of respecting the rights of the opposition even in these unusual circumstances.