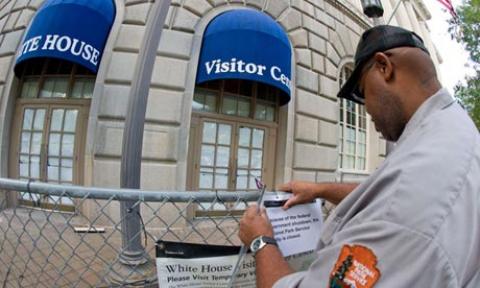 Hundreds of thousands of federal government employees across the United States were sent home on Tuesday, with little idea of when they would return to work or whether they would be paid.

The budget standoff between Republicans and Democrats on Capitol Hill, which led to the first partial shutdown of the US government in two decades, had very real consequences for workers around the country. The most common estimates say 800,000 employees would be sent home.

One of the worst affected government agencies in Washington was the US Department of Labor. Off the department's 16,000 workers, only around 3,000 have been deemed "essential" and therefore exempted from the shutdown. Thousands of workers filled the sidewalks from 11am onwards, after they had been instructed to go home.

The irony of employees of the Labor Department being laid off without pay was not lost on many of those who started streaming out of the doors on Tuesday. "I work for the Department of Labor and they won't let me work," said one office worker who emerged carrying shoes she normally stores at the office. "That's kinda sad."

Inside, two Labor Department chiefs – David Michaels, an assistant secretary, and his deputy, Jordan Barab – had just finished visiting every office to speak personally with staff. Barab did so despite being on crutches. The two men assured staff that they were important and apologised for the situation, according to several employees who came out immediately afterwards.

Like other government employees, Labor Department workers had been instructed to return to work on Tuesday to learn their fate. On arrival, they attended meetings by department supervisors, who told them whether or not they were needed for work. Then all that was left was to turn on out-of-office alerts on their emails and voicemail messages on their desk phones, turn off their computers at the socket and complete their timesheets.

Department employees were told to state that they had worked just four hours on Tuesday, and then add "UF" – code for furloughed – on the timesheets. "There was no sense when we might come back,"  said Lisa Long, 45, a safety engineer. "People were demoralised and maybe even a little shocked that it was actually happening."

The impact of the shutdown is not only being felt by the hundreds of thousands of employees who suddenly find themselves out of work; the consequences ripple out further. On Tuesday, the hot-dog trucks that usually stationed outside the rear entrance of the Francis Perkins Building building were gone. Nearly all of the restaurants that cater for office-workers were closed.

Employees in the Labor building include some well-paid senior officials, as well as others on annual salaries as low as $25,000. "These people need paychecks, they gotta eat," said Monique Tribbett, a 45-year-old IT contractor. "I'm trying to get people to protest. Not just people in the department but, you know, all these other people who are affected. If we all went, right now, to the steps of the Capitol building and protested then they might start listening to us, but people don't want to stand together. I feel like I'm on my own."

It was a similar story across the US. In New York, Miriam Allen was summoned into her office in the Jacob Javits federal building for two hours on Tuesday to "close up [her] work station". She said: "I put a voicemail on the telephone and put an out-of-office on the computer. I watered the plants, I cleaned the refrigerator, and I got my personal effects."

Allen, who is three years from retirement, works on homeless assistance programs for the Department of Housing & Urban Development. She and her colleagues had watched a webcast on Monday in which the department's secretary, Shaun Donovan, warned that if a budget was not passed by midnight they would have to come into work "for at least one hour and no longer than four to settle our affairs".

Allen said she was going to go back to her home in Queens – "thankfully I paid my mortgage yesterday" – and await news about returning to work.

"I feel that my government has failed me as a taxpayer and as a federal employee. I feel that Congress should be totally abolished," she said. "I don't blame the president at all. But the entire legislative branch is just dysfunctional."

In Texas, a federal employee who works in learning and education said that the shutdown had a marked effect on morale. The woman, who did not want her name to be published, said: "Morale is low and faith in our management and leaders has faded. I am sick and frustrated with our elected officials. That their entire goal is to not run the country, but to stop 'the other side' from accomplishing anything is ludicrious and pathetic."

She warned that the consequences of the furlough extend beyond the federal workers themselves: "Today, I am cleaning house and will pick up my kids from school today instead of paying our after-school care provider. She, too, will feel the loss of income."

An employee of the Department of Defense Education Activity, the civilian outreach arm of the defense department, told the Guardian of the despondent mood in her office. "I was sent home today along with thousands of other Defense Civilians in our community. The mood was somber in my office, depressing in the post office – which closed before I could get my package out – and downright miserable over the dinner table.

"My family and our financial hit is not more important than giving citizens access to basic health care ... but I could just punch the lawmakers who decided to marry my salary with a law that has already done its rounds in Congress and public debate."