Justice for Marissa! Set her Free! (Read and Sign) 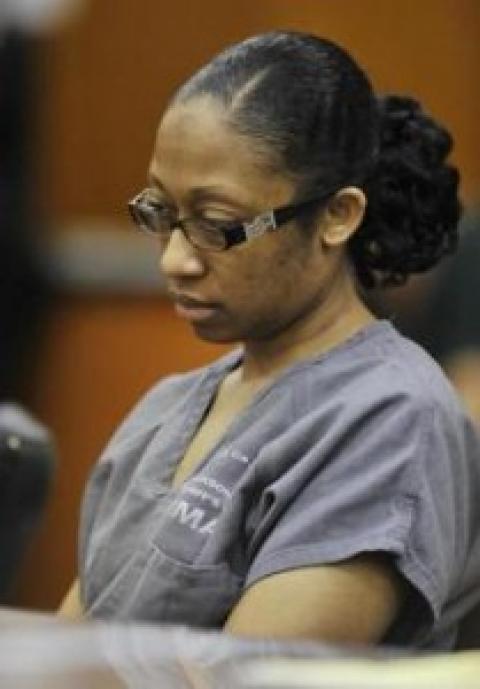 Marissa Alexander was imprisoned in 2010 for 20 years after trying to defend herself from a known abusive estranged husband.  She shot at him after a life threatening beating from a battering spouse with a history of abuse.  She along with almost 85% of women in prison have been incarcerated because of the "criminalization of survivors of domestic and sexual violence;" according to the group Emotional Justice, "their survival strategies are criminalized."

The coalition of women's groups that have formed the amazing FREE MARISSA NOW CAMPAIGN are now in high gear to try and finally free her from her unfair/unjust incarceration in a Florida prison. For those who need a bit more information about the case, read on.  For those of you who think you have enough of the details please just visit some of the many sites below and sign the petitions or write a letter and keep sending it for the month of October.  In a world where too many of us feel unable to make change, this is your chance to make a huge difference for Marissa.

Marissa wrote me from prison on 9/23: "I am really looking forward to the day where I can be candid and speak boldly and openly about my experiences while on this journey that are not visible to the public."  I am asking those of you reading this to help make that day come sooner, rather than later.

Here is some background information for those who might need it.  She is a 33-year-old Black woman/mother of three from Florida, found guilty of "aggravated assault with a deadly weapon."  She was sentenced to twenty years in jail under the mandatory "10-20" Florida law - according to which if you show a gun in an altercation, you get 10 years; if you fire it, you get 20.  The sentencing is mandatory and also minimum.  She had an 8-day-old baby daughter at the start of her incarceration.

With the assist of the Free Marissa Alexander Campaign the comparative injustice to the sentencing of George Zimmerman after killing Trayvon Martin was highly publicized.   Zimmerman is free after killing Martin; and Marissa is in jail for 20 years after defending herself, and her children and killing no one.  Marissa also used stand your ground law, but to no avail in her case.  The judge decided she was not sufficiently in fear of her life - or she would have run away rather than stood her ground-even though she had an earlier injunction against her husband for battery and survived a beating just 9 days before the premature birth of her daughter.

Congresswoman Corrine Brown speaking about Marissa says that Stand Your Ground law is unfairly not applied to victims of domestic violence when attempting to protect themselves and that "if you are black, the system will treat you differently."

Marissa's case is mired in complex and structural problems of the U.S. legal system. To take action on her behalf begins to redress a grave injustice to her and her family and friends, but it also continues an important mobilization against these larger issues that are present.  Marissa's case reveals the intersection of a series of crisis points in our society: 1) domestic violence; 2) the problem of stand your ground law in the first place but particularly applied to battered women; 3) the unfairness of mandatory minimum sentences; 4) the repeated racism of the law and the penal system; 5) overzealous prosecutions, to name just a few.

The committee to Free Marissa Now, along with her lawyers, has been granted a new trial for Marissa upon their appeal, and with the support they mobilized around the country.   Now with further assist from Rep. Corinne Brown they/we are requesting that the initial charges be dropped and that she be released from prison.   She has already served three years of an unjust sentence.

It is time for Marissa to return home to her children and her life.  It is completely within the realm of the prosecutor's discretion to drop all charges and not re-try this case.  If you agree will you please take a moment from your busy lives and make a difference.  Contact the names below.  A short sentence will suffice.

[Zillah Eisenstein has written feminist theory in North America for the past twenty-five years, and her writing is an integral part of her political activism. She writes about her work building coalitions across women's differences: the black/white divide in the U.S.; the struggles of Serb and Muslim women in the war in Bosnia; the needs of women health workers in Cuba; the commitments of environmentalists in Ghana; the relationship between socialists and feminists in union organizing; the struggles against extremist fundamentalisms in Egypt and Afghanistan; the needs of women workers in India, and the organizing of migrant women workers in Indonesia.

Zillah Eisenstein has been a Professor of Politics at Ithaca College in New York for the past 35 years and is now "Distinguished Scholar in Residence" there. Besides her recently published The Audacity of Races and Genders: A Personal and Global Story of the Obama Campaign (2009, Zed Press, London; Palgrave, U.S.), her books include among others: Sexual Decoys, Gender, Race and War in Imperial Democracy (London, Zed Press; New York, Palgrave, 2007); Against Empire, ibid.; Hatreds: Racialised and Sexualized Conflicts in the 21St Century, (Routledge, 1996); Global Obscentities: Patriarchy, Capitalism and the Lure of Cyberfantasy (NYU PRESS, 1996); and Manmade Breast Cancers, (Cornell Univ. Press, 2001). For more information see:www.ithaca.edu/zillah]