The fascists are moving from covert to overt 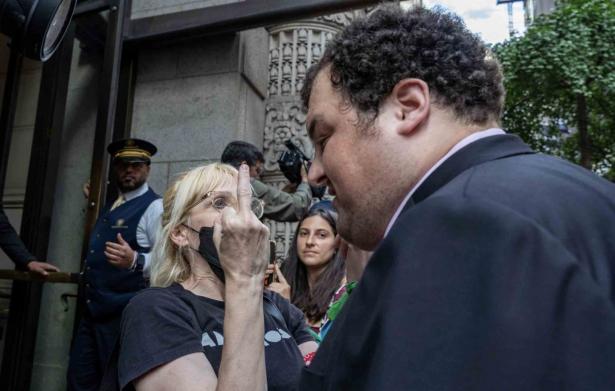 Greeter at a Federalist Society event after Roe was overturned, NYC. Credit,Nathan Moore

Hungarian prime minister Viktor Orbán received a standing ovation at the semiannual Conservative Political Action Conference (CPAC), America’s most important right-wing political event. He spent much of his speech defending his vision of a “zero-migration” country defined by ethnic homogeneity and Judeo-Christian values.

In this year’s primaries, there are more than 100 Indigenous candidates running for state or federal office in the United States. These leaders are no strangers to governance and civic duty—American Indigenous values, like the Iroquois Great Law of Peace, served as the foundational model for American democracy.

Abortion laws are changing daily, as legislatures across the U.S. pass new protections or strip away existing ones. Governors are signing executive orders to protect reproductive freedom or calling special legislative sessions and urging their colleagues to gut protections. Judges are placing injunctions or lifting them.

In scores of domestic violence gun homicides from 2017 through 2020, Reveal from The Center for Investigative Reporting found that law enforcement repeatedly ignored even the most glaring signs that a victim was at high risk of being killed.

Ever since GOP hedge-fund zillionaire Glenn Youngkin won the 2021 race for Virginia's governor with a campaign that celebrated attempts to censor Nobel-winning novelist Toni Morrison, Republicans across the country have been swept up in a book-banning frenzy.

Thoughts on the Rushdie Attack
By Yasmin Nair
yasminnair.com

One response to the attack, the dominant one so far in liberal and left-ish media, has been to once again hold up Salman  Rushdie as a writer who represents everything that is noble and good and enlightening about Writing with a capital W. But literature and writing are not so much “world-changing” or “dangerous”, as forms and acts that are far more mundane, more quotidian.

No Tears for an Ahistorical Historian
By Frank Joyce
CounterPunch

A small group are elevated to the status of national treasures.  David McCullough fits this job description to a T. The job, just to be clear, is to tell the stories that keep white people secure not just about the prevailing economic and political hierarchy but in its moral superiority as well.

Greg Abbott, Eric Adams and Migrants
By Gabriel Poblete and Greg B. Smith
The Texas Tribune

New York City was not initially a destination when the Texas governor began busing asylum-seekers east. That changed after NYC Mayor Eric Adams launched his war of words against Abbott, who’s now sending hundreds to the Big Apple.

The streets of New York City reflect the anger of the majority of Americans at the Supreme Court's decision to overturn Roe v. Wade.

Disney’s support of their LGBTQ+ employees led the inventor of the term “woke capitalism”, Rod Dreher, to write in The American Conservative that “Disney can go to hell” along with “Woke Capitalism’s whores” who support them.