Democratic Congress members, labor leaders and immigration advocates are arrested at a protest outside the Capitol calling for the House to vote on immigration legislation. 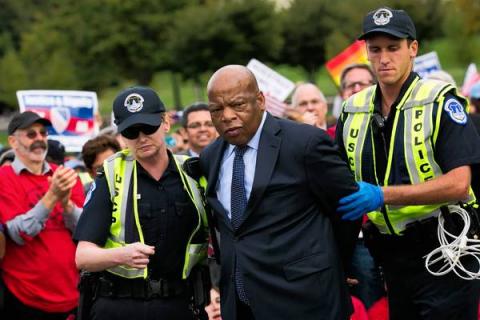 U.S. Rep. John Lewis (D-Ga.) is arrested outside the Capitol in Washington during a demonstration calling for the House to take up immigration overhaul legislation., Drew Angerer / Getty Images

WASHINGTON — Several members of Congress plus about 200 labor leaders and immigration advocates were arrested Tuesday outside the Capitol in a protest calling for the House to take up immigration reform, which stalled after passing the Senate.

Demonstrators marched to the Capitol after a rally and concert on the National Mall. Many stood or sat in the street in what organizers called a campaign of civil disobedience.

Democratic Reps. Charles B. Rangel and Joseph Crowley of New York, Raul M. Grijalva of Arizona, John Lewis of Georgia and Luis V. Gutierrez and Jan Schakowsky of Illinois were among those loaded into police vans. U.S. Capitol Police said they would be charged with "crowding, obstructing and incommoding," which is a misdemeanor.

"My colleagues and I are not afraid to get arrested for what we believe is important to move America forward," Rangel said in a video posted to his Twitter account.

Maria Elena Durazo, head of the Los Angeles County Federation of Labor, also was arrested. "We strongly believe we could get the majority between Democrats and some Republicans to pass immigration reform," she said beforehand.

The National Mall was technically closed along with other sites managed by the National Park Service because of the partial government shutdown. Organizers were allowed to hold the rally, named Camino Americano, on 1st Amendment grounds. The same exception was granted to veterans visiting the National World War II Memorial, also on the National Mall, last week.

House Minority Leader Nancy Pelosi (D-San Francisco), joined on stage by about 15 lawmakers, told the rally crowd that immigrants "make America more American." She was interrupted by chants of "Si se puede" — Spanish for "Yes we can" — and "We need a vote."

Pelosi praised an immigration bill proposed by House Democrats last week, which she said would be good for the economy and help reduce the deficit.

The Democratic-controlled Senate passed a bipartisan immigration bill in July, but it failed to gain traction in the GOP-led House and is unlikely to pass in the current session.

Sen. Jeff Sessions (R-Ala.), one of the strongest opponents of the Senate bill, criticized the rally and the proposed legislation.

"There's something odd about House leaders like Nancy Pelosi protesting on the Mall to get jobs for illegal aliens and pushing legislation to reduce job opportunities for U.S. citizens," he said in a statement.

The White House applauded what it called the "enthusiastic demonstration of support for immigration reform."

"It is time for House Republicans to put politics aside and join Democrats to fix our broken immigration system and make the economy stronger," said a statement from Jay Carney, the White House press secretary.