Kick the Shutdown Extortionists Out of Office!

The left needs a Karl Rove to target the 144 House GOPers and 19 senators of the Default Caucus. Look out, Ted Cruz 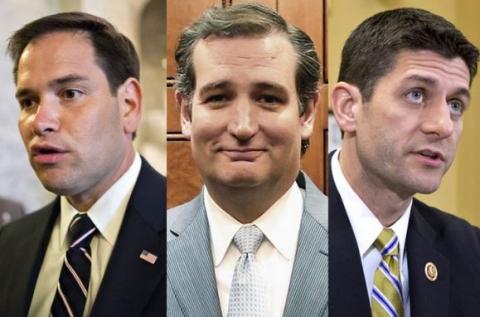 Oh dear God, here it comes: Another delusional media cycle in which we’ll be tortured by “thoughtful” analytic pieces about how the GOP is going to learn from its mistakes, part a zillion. Spare me.

Politico has an interesting read today about how Republican donors are frightened by their crazy congressional dependents, who almost blew up the world economy, and are looking for ways to rein them in. That would be nice, except it only quotes three big donors on the record, and one of them weighs in to say he’s 100 percent behind the party. AP and the Washington Post report that the GOP “establishment” wants to take back the party from Tea Party crazies. Except AP quotes Iowa Gov. Terry Branstead as an “establishment” figure who sees Rep. Paul Ryan as a reasonable emerging leader.

Yes, that’s the Paul Ryan who tried to remove the contraception mandate from the Affordable Care Act, as part of the shutdown/default hostage negotiations, and who voted against the final congressional compromise – which means he voted for default.

Next we’ll learn Reince Priebus is doing an autopsy of his autopsy. Yes, Priebus is trying to sound reasonable now too, even though he cast his lot behind Tailgunner Ted Cruz, the man who was ready to destroy the country in order to save it. Priebus said he “would stand behind Ted Cruz any day.” Clearly donors who disagree shouldn’t be funding the Republican National Committee. But Politico didn’t find one donor who would say on the record that he or she was going to punish Priebus and Co.

Even worse, Politico reports that hedge fund billionaire Paul Singer is one of the upset donors – but Singer doesn’t have a problem with the Tea Party “per se.” In fact, Singer is a big supporter of the Club for Growth, which helped drive this train; the group just announced it will support a primary challenge to ultra-right Mississippi Sen. Thad Cochran after he voted for the default-avoidance deal.

It should be clear: The only thing that stops a bad guy with a gun to the head of the global economy is a good guy who makes it unthinkable for the bad guy to use the gun, and that requires Democrats to stay as tough as they’ve been in this fight.

And probably get even tougher. I’m wishing for a Democratic Karl Rove who’ll run ads in the home districts of all 144 Republicans who voted against Wednesday’s deal, to make clear that their representative voted to default. Oh, sure, the pearl-clutchers at Politifact might not like it, but that’s what they did. There was no time to negotiate an alternative bill; the Treasury ran out of money the next day. A vote against the bill was a vote in favor of defaulting. Democrats need to hammer that home.

Short of that, I’m pleased that Senate Majority Leader Harry Reid, who deserves enormous credit for stiffening his party’s spine this time around, is insisting there will be no “entitlement” cuts just to replace the sequester slashing. I also enjoyed Reid flat-out declaring to the Huffington Post that Sen. David Vitter, prostitute patron turned slasher of congressional employee benefits, “is not playing with a full deck.” Reid pointed to his head and said, “Something is wrong there.”

Something is very much wrong there, and throughout the Republican Party.

Over in the Senate, most of the 19 men who voted against the bill – and they were all men, the Senate’s 20 women all voted to save the global economy – come from reliably red states and probably won’t face much backlash for their destructive vote. But there are a few exceptions. Florida Sen. Marco Rubio is known to want to run for president in 2016. That’s good, because he’s up for reelection to the Senate that same year, and given his shameful vote to pauperize Florida’s senior citizens with a default that would have stopped their Social Security checks, he should face defeat.

Likewise, in the purple state of Wisconsin, Sen. Ron Johnson tried to have it both ways during the October stalemate. Sure, he’d criticize his colleague Cruz once in a while. But Johnson emerged as a leading Default Truther, insisting that hitting the deadline would have merely been a “cash management” problem well within the power of Treasury Secretary Jack Lew to handle. Ultimately, Johnson too voted for default. Wisconsin can do better, and especially with Johnson, like Rubio, running in a presidential election year, it ought to be able to send Johnson home to manage his own cash, not ours. (Pennsylvania’s Pat Toomey, up the same year, should be on the same train.)

Even Ted Cruz ought to worry. He’s probably running for president, but if he doesn’t, or if he runs and loses (as he surely would), by 2018 his Texas Senate seat shouldn’t even be safe anymore. Democrats should play their hand well enough to turn Texas blue again.

Joan Walsh is Salon's editor at large and the author of "What's the Matter With White People: Finding Our Way in the Next America."