The breakthrough came after the worker deaths in Walnut Creek on Saturday. By Sunday, union leaders said they were ready to make concessions. By Monday, both sides agreed to sit down and a deal was struck in time to get limited train service running for the Tuesday morning commute. 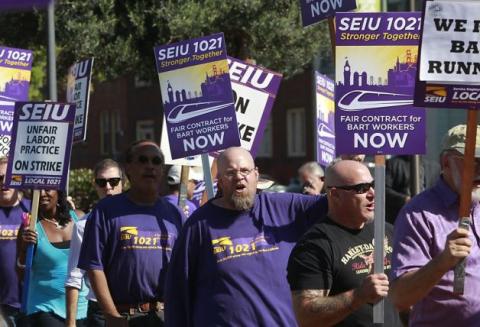 BART's union members join a noontime rally Oct. 18 at the Lake Merritt Station in Oakland., Michael Macor, The Chronicle
OAKLAND, Calif. (AP) -- It took months of tortured talks, two strikes and the deaths of two workers for San Francisco's transit rail workers and their employer to finally agree on a contract that got trains running again Tuesday.
The saga left commuters fuming and both sides bruised. A state lawmaker is considering introducing a bill that would ban public transit strikes, an idea seemingly anathema to a Democrat-controlled Legislature friendly to unions but perhaps a possibility because of the anger over the strike.
The tentative agreement between unions and Bay Area Rapid Transit came together quickly late Monday, just two days after a pair of transit workers were killed by a train operated by a BART employee being trained. The deaths shook both sides and helped get them back to a negotiating table they had deserted Friday.
The accident made it "more difficult for BART management to maintain a very hard line and not accept any kind of compromise," said John Logan, an invited observer to the bargaining sessions who is director of Labor and Employment Studies at San Francisco State University.
Logan added that the unions "did not want this strike to go on and did not see it as in their interest," partly because the public seemed to be blaming workers rather than management for the disruption to their lives.
Commuters who had faced traffic jams, crammed buses and crowded ferries gave a collective sigh of relief as train service resumed, carrying passengers across the sprawling region.
Hayward resident Meshe Harris, who has no car, was among the thousands of commuters who closely followed the talks. She had a job interview Tuesday and needed service to resume so she could get there.
"I was hoping, thank God, that it was going to be running soon," she said.
The tentative contract deal, announced by BART and its two largest unions, requires approval from the rank and file and BART's board of directors. Both sides said they had made concessions.
"This deal is more than we wanted to pay." said BART general manager Grace Crunican, declining to elaborate.
A third union, representing about 200 workers including financial analysts and people who monitor trains from a command center, is still negotiating with BART.
"We seem to be moving toward a solution," said Melissa Miller, secretary of the American Federation of State, County and Municipal Employees local 3993.
The BART dispute has prompted two area Democrats to weigh in against transit strikes. State Sen. Mark DeSaulnier, D-Concord, said he was looking into legislation to prevent future strikes. And Orinda City Councilman Steve Glazer, a candidate for state Assembly and former adviser to Gov. Jerry Brown, is calling for a transit strike prohibition because such labor actions "cripple our economy, hurt workers getting to their jobs, limit access to schools and health care, and damage our environment."
Strikes at major public transit systems are rare, in part because some states have laws prohibiting them. Those laws aren't always effective, however. In 2005, for example, New York City transit workers staged a three-day walkout despite a New York law that forbids public employees from striking.
BART workers represented by the two largest unions, including more than 2,300 mechanics, custodians, station agents, train operators and clerical staff, average about $71,000 in base salary and $11,000 in overtime annually, the transit agency said. The workers currently pay $92 a month for health care and contribute nothing toward their pensions.
Negotiations began in April, but there was little progress and two strikes followed, the first in July.
After reaching agreement on pay and benefits, the talks stalled last week after BART demanded changes to workplace rules, including how schedules are made, when overtime is paid and a move from paper to electronic record keeping.
The breakthrough came after the worker deaths in Walnut Creek on Saturday. By Sunday, union leaders said they were ready to make concessions. By Monday, both sides agreed to sit down and a deal was struck in time to get limited train service running for the Tuesday morning commute.
"When that happened over the weekend, they realized this thing had to end," said Amalgamated Transit Union international president Larry Hanley, whose union represents BART train drivers and station agents.
Hanley said that during Monday's negotiations, "management backed off the vast majority of the work rules" and settled on minor changes allowing new technology.
He said that the final economic package -- involving salaries, pensions and health care -- was essentially the same as a framework both sides has ostensibly agreed to. Final details on those issues have not been released but BART had offered a 12 percent pay raise over four years and a requirement that workers contribute 4 percent toward their pension and 9.5 percent toward medical benefits.
The deaths of two workers checking tracks are being investigated by the National Transportation and Safety Board, which says the driver was an operator trainee and held other positions at BART. The NTSB planned to interview BART managers and re-enact the incident.
---
Associated Press writers Jason Dearen in San Francisco and Terrence Chea in Oakland contributed to this story. Justin Pritchard reported from Los Angeles.
Subscribe to Portside