Book Review of "Body and Soul: The Black Panther Party and the Fight Against Medical Discrimination," by Alondra Nelson, University of Minnesota Press, $18.95 paperback, 289 pages. 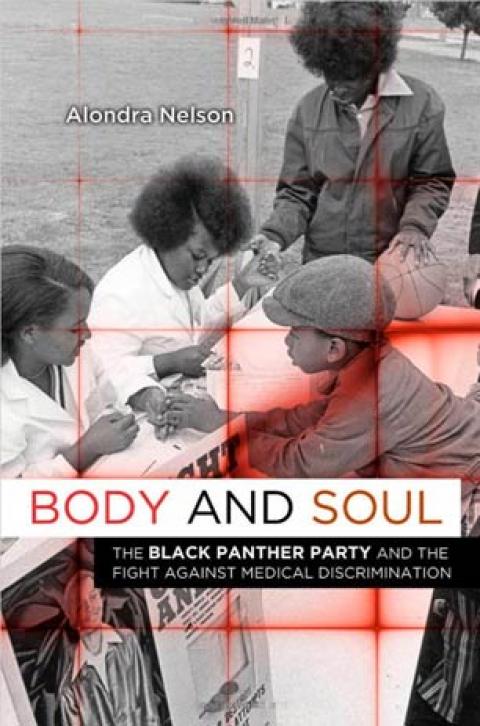 It is well-known that the Black Panther Party's [BPP] rallying call was "serve the people, body and soul." According to sociologist Alondra Nelson, the phrase was far more than a rhetorical flourish. In fact, Panther co-founder Bobby Seale made sure it was taken literally when, in the spring of 1970, he ordered all party chapters to create free breakfast programs for children and health centers to serve the medically needy.

It was a tall order, born of the belief that theory and practice need to work in tandem, with tangible benefits being given to under-resourced communities. The clinics were called People's Free Medical Centers [PFMC] and eventually were established in 13 cities across the country, from Cleveland to New Haven, Connecticut; Winston-Salem, North Carolina; and Los Angeles. One facility, in Portland, Oregon, offered dental as well as medical care; all relied on donated supplies and volunteer labor. Women, Nelson writes, were the backbone of the effort - not surprising, considering that approximately 60 percent of BPP members were female.

The ethos of the PFMCs was simple: "Your body belongs to the revolution, so you have to take care of it." Reality, however, made this nearly impossible because most African-Americans were unable to access affordable, high-quality health care, thanks to racism and classism. What's more, poor blacks were all too often subject to overt mistreatment: The forced sterilization of women, being used as human test subjects or having their cells removed for experimentation and sale by such esteemed institutions as Johns Hopkins Hospital. Less dramatic but even more pervasive, low-income people typically lacked services in their communities, requiring them to travel significant distances for treatment. Equally appalling, Nelson writes, medical practitioners routinely treated African-Americans as a physically and psychologically flawed species. As proof, they cited illnesses that impact blacks more than whites: Diabetes, hypertension, tuberculosis and ulcers, among them.

The BPP turned these bigoted notions asunder and challenged so-called healers to address environmental contamination, poverty, racism, substandard housing and occupational hazards. Indeed, the everyday indignities suffered by communities of color enraged the BPP and, influenced by theorists such as Marcus Garvey, Che Guevara and Franz Fanon, they made health care disparities a central component of their activism.

Although Nelson eschews first-person narratives from former Panthers and instead utilizes a fairly dry, academic writing style, she tells an exciting and powerful story. In fact, her account of this rarely reported aspect of Panther activism is fascinating. While most of the clinics - some were in storefronts, others in trailers or hastily built structures - did not last long, many of the women and men involved in the PFMCs went on to become credentialed health care professionals; some continue to provide services to underserved communities today, more than 40 years later.

During their heyday, PFMCs offered an astonishing smorgasbord of care. "Panther clinics mainly provided first aid and basic services - including testing for high blood pressure, lead poisoning, tuberculosis, and diabetes; cancer detection screenings; physical exams; treatments for colds and flu; and immunization against polio, measles, rubella, and diphtheria," Nelson writes. "In some instances, clinics screened for sickle cell anemia and offered optometry services, well-baby services, pediatrics and gynecology exams. For the most part Party health cadre attended to basic health needs that might otherwise have gone unconsidered or untreated." Nelson further notes that despite the focus on direct services, political education was never far from the examining room and a host of classes and discussions took place in each facility. In addition, the use of lay health providers - typically well-trained by volunteer doctors and registered nurses - helped demystify illness and treatment. These community health advocates also taught patients ways to simultaneously improve their own health and the health of their neighborhoods.

So what happened to these centers? Nelson mentions, but does not dwell on, COINTELPRO and government raids. Similarly, she does not focus much attention on the intentional fear-mongering promulgated by mainstream media to taint the party and undermine its reputation. Nonetheless, she reports that "human and financial resources aside, repression and regulatory hounding by authorities presented a formidable challenge to the success of the PFHCs." In Chicago, for example, the police destroyed a clinic during a random bust. Later, the city required the BPP to apply for a license to dispense health care, something the party refused to do because it would have allowed government inspectors to pay random visits to the center. Other cities erected similar bureaucratic barriers that the BPP feared would stifle or limit their involvement in local struggles.

The PFMCs also had to contend with government appropriation. Take the issue of sickle cell anemia, a pernicious and sometimes-fatal disorder that disproportionately affects African-Americans. By 1973, Nelson says "The Party came to play a diminished role in efforts to raise public consciousness when federal authorities, working with state public health agencies, brought the regulation of the genetic condition under their purview after years of inattention to the disease." Because the party's sickle cell anemia initiative had been on its agenda since 1970, when Congress allocated funds for research and genetic counseling, diagnosis and treatment for those suffering from the disorder, it subverted the grass-roots efforts of PFMCs everywhere they existed.

But it was tricky. On one hand, getting government action on this was a boon for African-Americans. On the other, it was a way for the feds to undercut the BPP and derail its work. But either way, the Panthers deserve credit for pushing Congressional lawmakers to address this and other blatant health inequities. And while it is disgraceful that these inequalities persist, thanks to Nelson, the lessons of the PFMCs and BPP are available as guideposts for contemporary health care activists, from single-payer proponents to Occupy groups.

The Black Panther Party believed that successful community organizing required institution building; integration into, and participation in, all aspects of political life; and education to enable informed decision making. Four decades after the party's demise, this remains a relevant and wise tactical combo.

Eleanor J. Bader is a freelance writer, teacher and feminist activist from Brooklyn, New York. She writes for The Brooklyn Rail, ontheissuesmagazine.com, RHrealitycheck.org and other progressive blogs and publications.