After Sandy: New York's 'Perfect Storm' of Inequality in Wealth and Housing

One year on, it's painfully clear that society's choices mean the hurricane hit our poorest communities harder than the well-to-do. 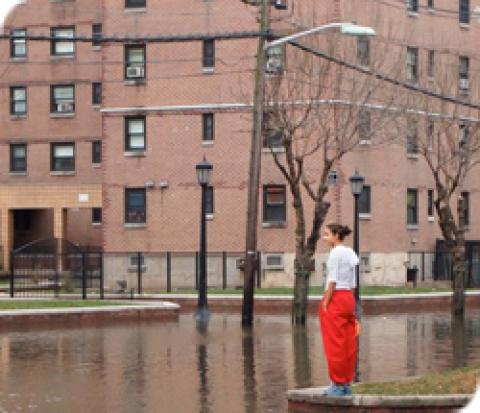 Corners of NYCHA and Sandy,

Sebastian Junger's 1997 book, The Perfect Storm, tells the sad tale of a crew aboard a sword-fishing vessel who, needing to earn more cash, decide to brave a storm. But instead of one storm, there are two – plus a brewing hurricane – between them and home. On the one-year anniversary of Hurricane Sandy, this is a fitting metaphor.

Sandy was the storm that brewed amid the existing, devastating storms of our society – the swirling winds of climate change, wealth inequality, and our general failure to invest in infrastructure: better housing, more transit, sea walls and levees. Far too many New Yorkers were hurt by the storm.

And the storm did not discriminate. Wall Street bankers and street vendors were both hit hard. But its lasting impact was not so undiscriminating: the decisions we've made as a society mean that some who were struggling before the storm were effectively wiped out by it.

In New York City in the 1950s, we put our elderly and disabled, our hardworking poor and their children, in high-rise brick boxes of public housing on vacant, out-of-the-way waterfront land. It was a good thing to house poor New Yorkers. Perhaps, we can be forgiven for placing that housing where no one wanted to be and where no one would complain about poor neighbors.

At the time, no one knew about climate change and that, by the 1990s, sea levels would be rising twice as fast as they had been over the previous 80-year period. Ultimately, though, this meant that public housing residents were not just underwater economically, but facing a greater environmental threat of flooding and displacement long before the Sandy storm surge.

New York is home to the nation's oldest and largest public housing authority. It houses 400,000 people in 2,600 buildings on 334 such sites around the city. Prior to Sandy, public housing faced an annual deficit of $40m in operating costs and $6.6bn in capital needs, such as repairs to roofs, elevators, heating and grounds. And that was before Sandy flooded basements, corroded electrical boxes and damaged boilers in building after building.

Wealth inequality has also long plagued the New York City landscape. New York is home to more billionaires than any other city in the world. We're second in the world in millionaires, just behind Tokyo. Meanwhile, according to the Economic Policy Institute, an average family of four in New York needs a $93,000 a year income to live modestly.

Yet, median household income in 2012 was about $49,500. This means that even before Sandy eroded New York's economy, millions of New Yorkers were already struggling to keep their heads above water.

In other words, for millions of poor people, Hurricane Sandy wasn't a new storm, but more an exacerbation of existing tumult. While middle- and upper-class New Yorkers in places like the Rockaways and Red Hook certainly struggled in the aftermath of Sandy too, the storm struck poor communities harder. As the water receded, it revealed the profound inequalities that had been here all along – but which were now even worse.

This is why, for instance, many public housing residents didn't evacuate – because they lacked the resources or government support to do so and were afraid they would lose their housing. The city has lost 230,000 rent regulated units (pdf) over the past three decades; and as of March 2013, over 300,000 families were on the waiting list for public housing and housing vouchers. While public housing is no picnic, it's a lifeline for those who need it.

In the poor and marginalized communities of New York – mostly people of color – conditions were bad before Superstorm Sandy – and chaos ensued after. Sandy exposed millions of other New Yorkers to the sense of economic and environmental insecurity that clouds the lives of the poor every single day.

It's hard to find a silver lining here, but here's my take. We can use the storm to wash away whatever ignorance and complacency we might have had about the daily, long-term and systemic struggles of poor people – not just in New York, but everywhere. And we can have hope that if we pay attention to these inequities now, we can help prevent such devastation when the next disaster hits.

If we can ensure that the most vulnerable Americans, wherever they are, have economic security, quality affordable housing and the community support systems and infrastructure they need, then we can all better weather the next storm, whenever and wherever it hits.

[Maya Wiley is founder and president of the Center for Social Inclusion. A civil rights attorney and policy advocate, she has also worked for the Open Society Institute, American Civil Liberties Union, and the NAACP. Maya was named one of the leading black women social activists in 2011 by the Root.com]