Tens of thousands of workers at industrial estates across Indonesia walked off their jobs on Oct 28 at the start of week-long protests to demand average wage increases of 50 per cent next year, citing rising living costs. 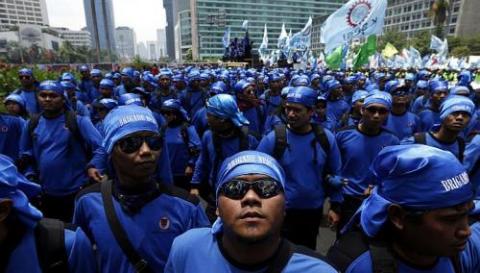 Union workers walk during a protest at the business district in Jakarta, October 17, 2013. , Reuters

Millions of workers across Indonesia are joining a national strike this week to press for a higher minimum wage and universal health coverage. This is actually a big deal for Americans, not that any of us are paying a lick of attention.

Why does a giant strike in Indonesia matter? Because the United States stands to benefit from the rise of a global middle class that can buy high-end American goods and services, and we also stand to benefit as the cost of labor rises in developing countries, making American workers more competitive.

Indonesia is not just any developing country. It's the fourth most populous country in the world (after China, India, and the U.S.), and it's now a big sweatshop for global corporations. The country's minimum wage is about $200 a month, leaving vast swaths of Indonesia's workforce in poverty.

But Indonesia's middle class is also growing by leaps and bounds. The number of Indonesian households with more than $10,000 in disposable income has doubled in just the past seven years -- and is projected to double again by the end of this decade. Meanwhile, American exports to Indonesia have nearly quadrupled in the past decade.

Strong gains by organized labor could help to greatly accelerate the rise of Indonesia's middle class. Over the past century, unions have been instrumental in creating shared middle class prosperity in country after country, including -- of course -- here in the United States.

When a country has a growing middle class, lots of good things start to happen in a virtuous cycle. Middle class people tend to demand more investments in education, transportation, environmental protection, and the social safety net. And they tend to push back against corruption and the arbitrary abuse of power, agitating for stronger democracy.

When countries undergo this kind of transformation, they are less likely to remain part of the global sweatshop economy. Just think about what happened in places like South Korea, Taiwan, and Singapore -- which all used to be centers of low-wage labor. In some respects, China is clearly on this path, with a fast growing middle class. Chinese companies already are outsourcing to cheaper labor markets like Indonesia and Vietnam.

Drastically shrinking the global sweatshop economy, and raising labor costs worldwide, would be a very good thing for American workers. Remember, outsourcing is a big hassle for many U.S. companies, and shipping goods is expensive and slow, so outsourcing is only worth it if labor costs are much, much cheaper. If those costs rise even somewhat, it can be enough to tip the balance in favor of staying in the U.S.

Already, we're seeing signs of what this could mean as labor costs have risen globally, leading more companies to "insource" to America.

Bangladesh, with the seventh largest labor force in the world, is now in the process of tightening labor laws after a deadly building collapse in a way that will raise production costs there. If Indonesia's strikes succeed, two of the world's largest sweatshop arenas will see important changes in just a one-year period.

The United States doesn't have to be a passive bystander to the global struggle to raise labor standards. The U.S. Department of Labor has a bureau that expressly exists to foster labor rights worldwide, and the U.S. has a variety of other mechanisms to push this agenda, most notably trade rules that stipulate compliance with labor rights. The U.S. could also do much more to bolster the International Labor Organization, which promotes higher labor standards globally.

Of course, though, the United States has too often been on the wrong side of the global labor fight, backing multinational corporations with a short-sighted focus on cheap labor.

We need to think long term, and see strong labor unions in places like Indonesia as the key to building a global middle class that will create more prosperity for Americans.

David Callahan is a co-founder of Demos and now edits the Demos blog PolicyShop.net. David is the author of eight books and his many articles have been published in such places as The New York Times, The Washington Post, The Nation, and The American Prospect.