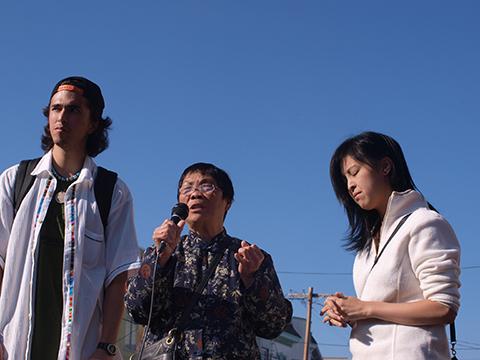 On a glaring-hot, near-cloudless day in San Francisco Sept. 25, an elderly Chinese American couple, Gum Gee Lee and her husband Poon Heung Lee—and their disabled 48 year-old daughter Shiuman Lee—were about to be physically removed from their home of 34 years by deputy sheriffs following a court order to carry out yet another Ellis Act eviction.

Landlord Matthew Miller, who bought the 1506 Jackson Street building (along with neighboring units) in 2012 for $1.2 million, demanded the Lee family vacate the property so he could turn the units into upscale tenancies-in-common and turn a huge profit in San Francisco’s searing-hot real estate market.

Following the mass protest, prime-time media attention, and pressure from city leaders, the Lee family gained a temporary reprieve to seek a new home—an inspiring if temporary victory. But the clock is ticking fast on their removal: the family has until this Sunday, October 20, to find a new home, and will soon join the skyrocketing ranks of San Francisco evictees.

The Lee family is one instance of a twin tsunami hitting San Francisco communities: soaring evictions, and skyrocketing rents. According to data compiled by the Tenants Union, Ellis Act evictions (in which landlords remove rental units from the market and turn them into highly remunerative condos and tenancies-in-common) have tripled since 2011. Overall, no-fault evictions (when a landlord evicts a tenant despite the tenant not having violated their lease) have shot up from 687 in 2011, to 1023 and counting in 2013.

Inside the Lee home on the day of the scheduled eviction, while hundreds of protesters packed the sidewalks out front, I spoke briefly with 74-year-old Gum Gee Lee as they prepared to be ousted from their home. A whole life was there: family photos, a prayer spot with incense and candles, couch, TV, movies, music, a kitchen full of cookware and food (some freshly cooked on the stove), neatly kept bedroom, wall calendar, a whole life erected over years, about to be torn down.

“San Francisco has many things that are unfair,” Lee told me through a family friend who translated from Cantonese. “San Francisco should do more to protect the housing of people. Hopefully the government will do something about this.”

In the dimly lit long narrow hallway, another family friend added: “it’s not fair that someone tells you that you have to go—that’s not freedom.”

The Lee family, living in their $800-a-month apartment primarily on social security and disability benefits, had nowhere to go and couldn’t find any affordable housing options in the city after intensive searching. As Omar Calimbas, senior attorney with Asian Americans Advancing Justice/Asian Law Caucus explained to the crowd, “The Lee family applied for affordable housing, but nobody took them. They asked Miller, ‘can you just help us find another place to live,’ and his response was a court order for their eviction.”

Calimbas added, “They could lose their home, their life.” The judge had denied the Lee’s final appeals, emphasizing “the damage the landlord could suffer if his deal fell apart,” Calimbas said.

Miller’s attorneys stood across the street with a locksmith they hired parked nearby, ready to secure the building upon the Lee’s removal by sheriff’s deputies. The men refused to comment or identify themselves by name or firm, though one when questioned, admitted, “No, it’s not fun” helping Miller to evict and remove the tenants. When I attempted to interview the locksmith, one of Miller’s attorneys strode up to us quickly and said, “You have no comment, right?”

Matthew Miller began evicting and buying out tenants from Jackson Street soon after purchasing the building, one of a handful of real estate property LLC’s (Limited Liability Corporations) he operates in San Francisco. It’s not Miller’s first speculation-driven eviction. In 2009, Miller “evicted low-income tenants from a rent-controlled property in North Beach and resold it as market rate tenancy-in-common (TIC) units,” according to a background document on the Lee family eviction, prepared by Calimbas.

Designer Dwellings, which Miller launched in 2005, has minimal online presence and no detectable business registration in San Francisco. Before getting into speculative real estate, Miller, an Anderson School of Business grad, held positions as a Director at PayPal and eBay, and Senior Manager at Mondex USA and Wells Fargo.

Miller did not return this writer’s request for comment.

Back on Jackson Street, under a scalding September sun, a couple hundred protesters from across the city—spanning an array of housing and tenants’ rights groups, Chinese-American community and neighborhood advocates, labor, and others, joined by Supervisors Jane Kim, David Campos, and David Chiu—amassed for a day-long resistance that led to the eviction being postponed.

As the pressure built over the next several days, from grassroots movements to city Supervisors and mainstream media, Mayor Ed Lee– the one-time tenants’ rights lawyer for Chinatown Community Development Center (CCDC) who spearheaded big tax breaks for Twitter and other inducements for tech firms that have fueled soaring rents and evictions citywide—entered the spotlight and convinced Miller to give the family an extra 10 days to secure a new home of some kind.

As of Oct. 15, “they haven’t secured other housing yet” that fits their tight budget, said Calimbas.

The delay was trumpeted in mainstream media as the result of the mayoral intervention, but came only after headlines generated by the mass protests and outcry. Still, the attention and temporary victory could be a watershed moment for a resurgent housing and tenants’ rights movement.

Gen Fujioka, policy director for CCDC, asked the crowd to “recognize the courage of the Lee family. This has been a real struggle for them to come to this point.” He noted “how hard it is for a working-class family, an immigrant family, that followed the rules their whole lives,” to suddenly be foisted in the public spotlight.

The Lee family’s fight to save their home appears to have become a flashpoint for a resurgent tenants’ and housing rights movement that has helped put evictions and displacement on the front pages—and, potentially, on the front burner of city policymakers who are under increasing pressure to stem a tidal wave of evictions.

An emerging citywide movement—including the Housing Rights Committee, Tenants Union, Eviction Free San Francisco (for which I’m a member and volunteer organizer, for disclosure), Jobs With Justice, Occupy Bernal, the Alliance of Californians for Community Empowerment, and Chinatown Community Development Center—is fighting displacement both in the streets and in City Hall.

Labor also came out strong for the Lee family. “Many of our members don’t live here anymore, many are being kicked out” via evictions, foreclosures, and soaring housing costs, said Conny Ford, Secretary Treasurer for Office and Professional Employees International Union (OPEIU) Local 3. A growing number of city workers, teachers, and other union workers “can’t live here anymore,” Ford said.

Mike Casey, President of UNITE HERE Local 2 echoed this mounting affordability crisis that’s increasingly uniting labor and housing rights movements. “We are seeing greater gaps between the very rich and working people. This city is becoming polarized because our voices are not being heard.”

Every week brings new housing emergencies for city residents, families, artists, activists and others. Jeremy Mykaels, a 62-year-old man enduring AIDS may be removed from his home within weeks if his landlords aren’t swayed to rescind his eviction (he could also lose his life-saving healthcare if he’s booted from his home, and effectively out of San Francisco). Meanwhile, attorneys and advocates with Chinatown Community Development Center, Tenderloin Housing Clinic, and Eviction Free San Francisco are fighting evictions looming for many long-time tenants of housing owned by Urban Green Investments—which they call “Urban Greed.”

Another eviction grabbing headlines is that of longtime Mission artist René Yañez, who helped launched San Francisco’s Day of the Dead ceremonies in the early 1970s. Yañez is now being evicted even as both he and his partner Cynthia Wallis battle terminal cancer.

On Saturday, October 12, a multi-racial and multi-generational crowd of hundreds marched and rallied along the 24th Street corridor, where both residents and mom-and-pop businesses have been tossed out by evictions and astronomical rent increases. For hours, the loud and spirited gathering—declaring “Our Mission, No Eviction!”—demanded city leadership and action to stem the displacement that’s hollowing out the cultural core of communities.
Among the hundreds was Gum Gee Lee, who told the crowd, “I’m here because I support the fight against displacement in all our communities.”

While Ellis Act evictions flood San Francisco with no apparent end or reform in sight, members of the Board of Supervisors are now discussing ways to help evictees through priority “front of the line” treatment in affordable housing. This reform could help some, but could also delay access for others unless funds and housing spaces are greatly increased.

In a fiery speech at the Mission District protest, Supervisor John Avalos said “The only way we’re going to fight this is by making these protests bigger and bigger”—and by fighting new luxury housing (such as 8 Washington). “I am so sick at heart that San Francisco keeps building luxury housing that no one here can afford.”