Germany May Invite Edward Snowden As Witness in NSA Inquiry

German Green politician meets US whistleblower Edward Snowden in Moscow to discuss possibility of helping parliamentary investigation into US spying. Snowden letter: I witnessed systemic violations of law by my government that created a moral duty to act. ... However, speaking the truth is not a crime. I am confident that with the support of the international community, the government of the United States will abandon this harmful behavior. 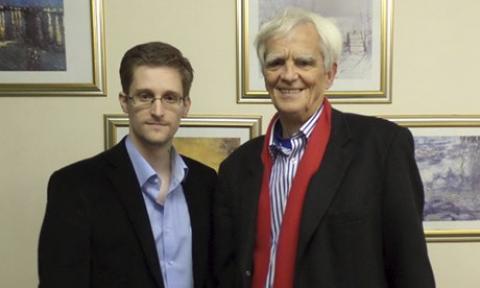 Germany May Invite Edward Snowden As Witness in NSA Inquiry

Edward Snowden may be invited to Germany as a witness against the US National Security Agency.

Action is under way in the Bundestag to commission a parliamentary investigation into US intelligence service spying and a German politician met Snowden in Moscow on Thursday to discuss the matter.

Hans-Christian Ströbele, the veteran Green party candidate for Berlin's Kreuzberg district, reported that the US whistleblower was prepared in principle to assist a parliamentary inquiry.

But Ströbele warned of the legal complications that would come with Snowden leaving Russia, where he has been granted asylum after leaking documents on mass NSA surveillance. Witnesses to parliamentary enquiries are usually given the financial support and legal protection required for them to travel to Germany.

During the meeting, Snowden handed Ströbele a letter addressed to the German chancellor, Angela Merkel, which will be read out publicly on Friday afternoon.

The latest developments will encourage those who hope Germany may eventually grant political asylum to Snowden. In June, his application for asylum there was rejected by the foreign ministry because, legally, he had to apply for asylum in person and on German soil. If Snowden was brought to Germany as a witness, he could meet these requirements.

Activists are said to be considering other means of getting Snowden to Germany. Under paragraph 22 of the German residence law, Snowden could be granted a residence permit "if the interior ministry declares it to be in Germany's political interest". After reports of Merkel's mobile phone being hacked by the NSA, such conditions could be said to apply.

Some German politicians and newspaper columnists have backed calls for Snowden to be invited as a witness. The justice minister, Sabine Leuheusser-Schnarrenberger, told the Passauer Neue Presse newspaper: "If the allegations build up and lead to an investigation, one could think about calling in Snowden as a witness."

Thomas Oppermann, of the Social Democrats, said: "Snowden's claims appear to be credible, while the US government has blatantly lied to us on this matter. That's why Snowden could be an important witness, also in clearing up the surveillance of the chancellor's mobile."

In Süddeutsche Zeitung, the columnist Heribert Prantl wrote: "Granting asylum to Snowden could be a way of restoring Germany's damaged sovereignty."

The Bundestag will hold a special session to discuss NSA spying on 18 November. The Green party and the leftwing Die Linke have been leading calls for that session to result in a parliamentary investigation. Latest reports indicate that the Social Democratic party will support such a move, which would mean it would most likely go ahead.

Full text of NSA whistleblower's letter on US surveillance to chancellor Angela Merkel, the German parliament and federal prosecutors, passed on by German politician Hans-Christian Ströebele

To whom it may concern,

I have been invited to write to you regarding your investigation of mass surveillance.

In the course of my service to these organizations, I believe I witnessed systemic violations of law by my government that created a moral duty to act. As a result of reporting these concerns, I have face a severe and sustained campaign of persecution that forced me from my family and home. I am currently living in exile under a grant of temporary asylum in the Russian Federation in accordance with international law.

I am heartened by the response to my act of political expression, in both the United States and beyond. Citizens around the world as well as high officials – including in the United States – have judged the revelation of an unaccountable system of pervasive surveillance to be a public service. These spying revelations have resulted in the proposal of many new laws and policies to address formerly concealed abuses of the public trust. The benefits to society of this growing knowledge are becoming increasingly clear at the same time claimed risks are being shown to have been mitigated.

Though the outcome of my efforts has been demonstrably positive, my government continues to treat dissent as defection, and seeks to criminalize political speech with felony charges that provide no defense. However, speaking the truth is not a crime. I am confident that with the support of the international community, the government of the United States will abandon this harmful behavior. I hope that when the difficulties of this humanitarian situation have been resolved, I will be able to cooperate in the responsible finding of fact regarding reports in the media, particularly in regard to the truth and authenticity of documents, as appropriate and in accordance with the law.

I look forward to speaking with you in your country when the situation is resolved, and thank you for your efforts in upholding the international laws that protect us all.

With my best regards,