After the coup, Honduras had the most rapid rise in inequality in Latin America and now has the most unequal distribution of income in the region. Over 100 percent of all real income gains in in 2010 and 2011 went to the wealthiest 10 percent of Hondurans -- the poverty rate increased by 13.2% while the extreme poverty rate increased 26%. But whoever wins next election will have ample room to increase employment, and invest in infrastructure, education and development. 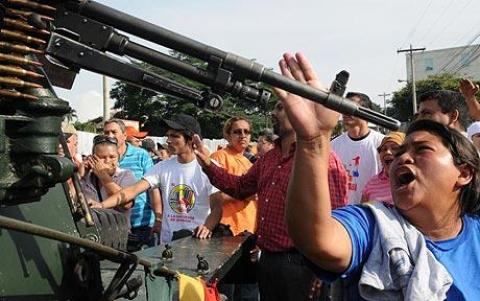 Washington, D.C.- A new paper from the Center for Economic and Policy Research examines Honduras’ economy and finds that much of the economic and social progress experienced from 2006 – 2009 has been reversed in the years since. The paper, “Honduras Since the Coup: Economic and Social Outcomes” by researchers Jake Johnston and Stephan Lefebvre, shows that economic inequality in Honduras has increased dramatically since 2010, while poverty has worsened, unemployment has increased and underemployment has risen dramatically, with many more workers receiving less than the minimum wage. While some of the decline was initially due to the global recession that began in 2008, much of it is a result of policy choices, including a decrease in social spending.

The paper also notes that whoever wins the next election will have ample room to pursue expansionary fiscal policies, increase employment, and invest in infrastructure, education and development -- despite a significant increase in debt levels in recent years.  That is because the country's debt burden is still relatively low, with interest payments on the debt totaling less than 1.7 percent, and much of the debt is internal and denominated in domestic currency.

“This paper shows that there were important economic and social gains under the Zelaya administration that were cut short by the 2009 coup d’etat,” Research Associate and paper co-author Jake Johnston said. “Unfortunately, these gains have largely been reversed in the years since, partly due to policy choices of the current government.”

The paper’s key findings include:

“Considering the rapid increase in poverty and inequality since the coup, it is no wonder that economic issues rated high among voters’ concerns in recent polls,” Johnston said. “Hondurans are clearly much worse off than they were four years ago.”