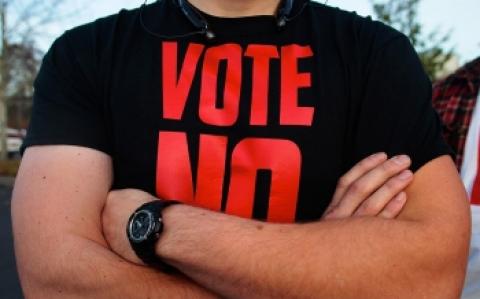 In a one-sided vote on Nov. 13, unionized machinists in Everett, Wash., rejected a multiyear contract to build Boeing’s new 777x jetliner, choosing dignity over a paycheck. Their union — the International Association of Machinists District 751 — is opposing the profitable company's proposal that would have eviscerated workers' pensions and cut back on health care. Considered extremely long in U.S. labor relations (most contracts are for no more than five years), the eight-year contract proposed by Boeing would keep the union from striking and from negotiating for higher wages that keep up with inflation.

Boeing, in response, has threatened to move production to a nonunion state, which is why Washington has offered the company the biggest state tax subsidy in U.S. history ($8.7 billion over the next 16 years) and why union leadership urged a yes vote. The result was not only a stunning rebuke but also a testament to the gloomy idea that U.S. workers may never share in the prosperity of the companies they serve.

The declining power of unions in the United States is not a new story. But unlike Ford, General Motors and Chrysler — long-struggling companies kept alive by government help — Boeing posted a $3.9 billion net profit last year. In a country that has largely deindustrialized, where the big money is in finance rather than factories, Boeing remains a symbol of American manufacturing might. It is a key part of the military-industrial complex, producing aerospace machinery the gives the U.S. unmatched military power. Boeing's only real competitor in the civilian market is the European company Airbus. Headquartered in Chicago but with manufacturing roots in Washington state, Boeing dominates the skies.

Boeing's stingy demands are part of a trend at companies where historically American capitalism has actually functioned fine for workers. In 2010, employees at an upstate New York factory making Mott's applesauce went on strike after its parent company, the Dr Pepper Snapple Group, which posted a $555 million profit the year before, demanded deep wage and benefit cuts on grounds that other companies in region were paying less. In 2011, Verizon phone workers who maintain the vast landline system for the telecom giant went on strike when it asked workers to accept cuts on the grounds that nonunion workers at its wireless subsidiary were more responsible for company profits.

Boeing's decision to fight its machinists is saddening on a number of fronts. Earlier this year, its 787 Dreamliner — anticipated as a breakthrough in the world of commercial aviation — was grounded after battery fires. The New Yorker's James Surowieki noted that the company chose to outsource a great deal of the Dreamliner's engineering and design to save costs. As a result, in addition to getting reduced quality on the work, the company lost control of key points in the supply chain of the product.

This runs counter to the myth of the American Dream — the idea that if Americans work hard and contribute to the nation's productivity, they will be rewarded with a good life, including the ability to own a home, provide for a family, be secure from sickness and in retirement, and perhaps even take a vacation every once in a while. In the history of U.S. labor, Boeing's machinists never sided with the radicalism that has been popular in Pacific Coast unionism. They are skilled, patriotic trade workers who find satisfaction in knowing that they are contributing to the country's growth and national security.

The machinists' fight against Boeing management puts to shame those commentators who insist that unions are threatening the United States' economic competitiveness. The machinists are simply pushing for their strong, profitable company — an enterprise that owes some of its success to the largesse of taxpayers — to share its revenues more fairly with the workers responsible for building its products. If these workers were to share more in the company's success, they would have more to spend, which, in turn, would be a boon for the U.S. economy.

If Boeing's workers, despite their dedication and the company's profitability, cannot get a fair labor deal, it is difficult to see how any American worker can.

Ari Paul is a lecturer at Columbia University's School of International and Public Affairs and has written about politics and labor for the Nation, Dissent, the American Prospect, the Brooklyn Rail, the Guardian and many other outlets.