1,500 demonstrations were held across the country today at Walmart stores. As reports are coming in, 110 people have been arrested. 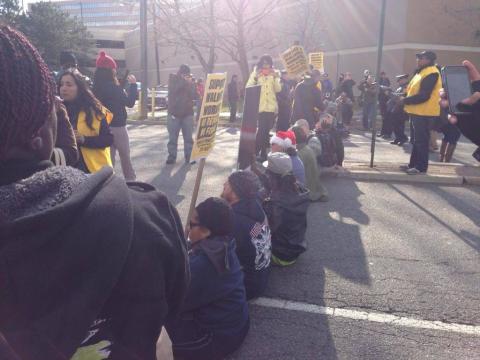 Activists in Secaucus, New Jersey, engage in an act of civil disobedience during a Black Friday Walmart protest., All photos by Allison Kilkenny

Walmart employees and supporters protested in cities all across the country on Black Friday in opposition to Walmart’s low wages and poor treatment of workers. In some cases, protesters volunteered to engage in acts of civil disobedience and were arrested by police. Organizers expected 1,500 total protests in California, Alaska, New Jersey, Virginia, Florida, Texas, Minnesota, Illinois, Washington and Canada. In Secaucus, New Jersey, thirteen activists were arrested after sitting in the middle of the street to block traffic.

Marc Bowers said he worked at a Walmart in Dallas, Texas, for eight years before he was fired for participating in a strike. After Walmart fired him, he decided to get more involved with worker organizing, including traveling to New Jersey for this year’s Black Friday protest. Bowers said he hopes to inspire other workers enduring similar hardships. (Photo: Elaine Rozier and Marc Bowers, right, at today’s New Jersey protest) 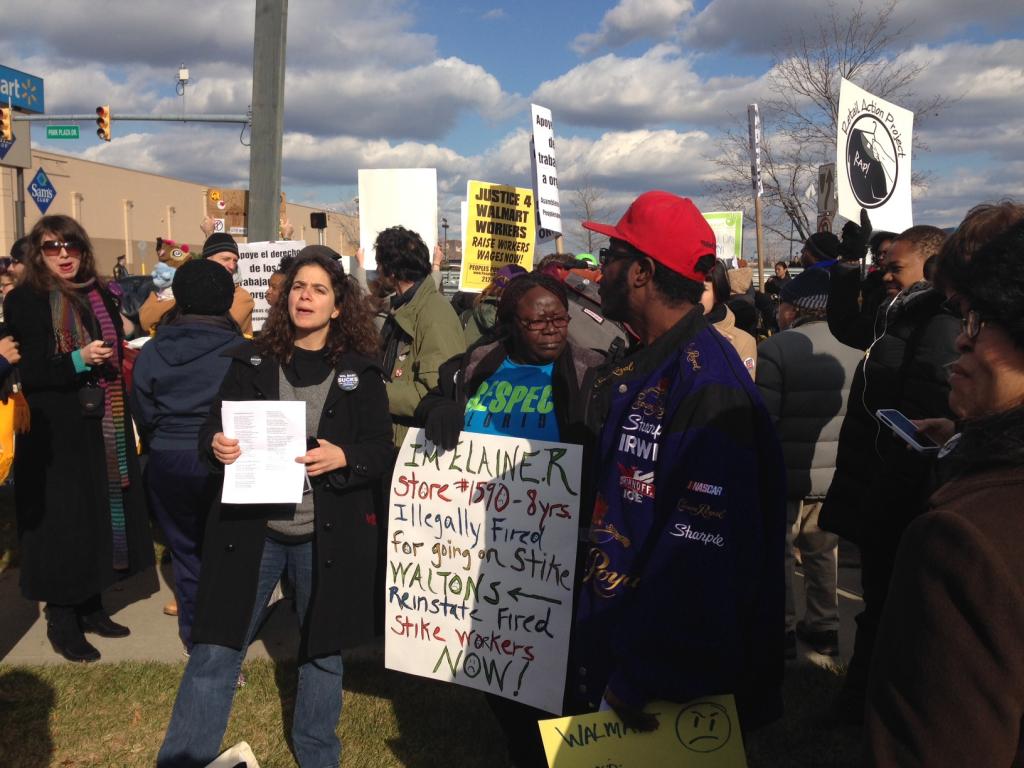 “If you let people know what’s going on, they’ll get involved too. They’re probably fed up with the same things,” he said.

Bowers added that this labor struggle will influence future generations.

“I’m here to fight for everybody who has been done wrong. I feel like, if I don’t fight, our next generation of kids will not have a future. As a man, I have the right to stand up on my own two feet. And I’m doing it right now,” he said.

The National Labor Relations Board announced last week that it plans to pursue charges against Walmart for threatening and punishing workers who planned to go on strike last year. The agency’s general counsel investigated and “found merit” in workers’ claims that Walmart “unlawfully threatened” employees for participating in walkouts during last year’s Black Friday.

According to the agency, Walmart intimidated, surveilled or punished workers in fourteen different states, which is illegal under US labor law. 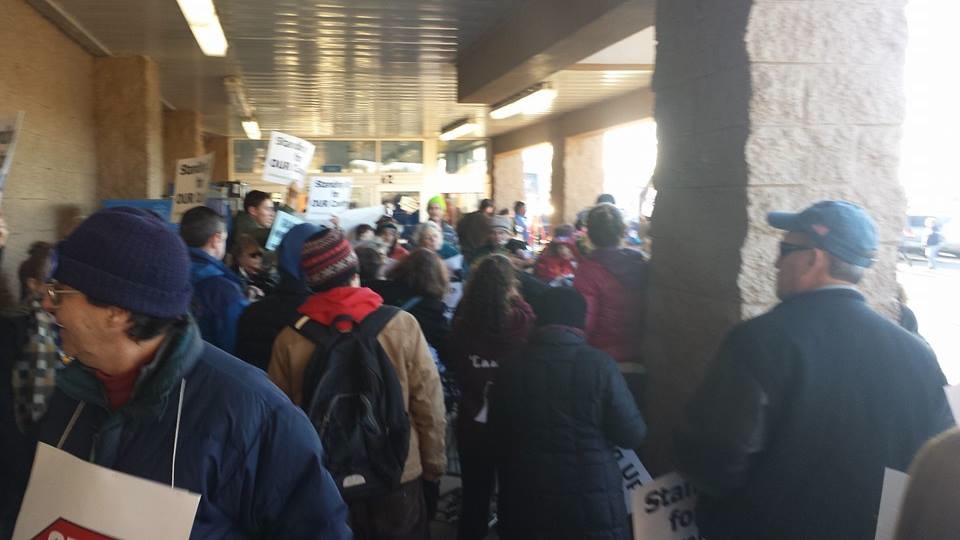 The threats and intimidation include comments from official Walmart spokesperson David Tovar, who told CBS Evening News last year, “There could be consequences” for workers participating in any actions.

Also in attendance at the Secaucus protest was Elaine Rozier, who worked at a Walmart in Miami, Florida, for eight years.

“I’m here today to represent all the solid Walmart workers that are afraid to stand up for their rights. I’m here to represent the nation, to let Walmart corporation know that we’re not standing back. I’m stand up for my rights, for my kids, for my grandkids and their kids. I’m tired of not getting living wages,” Rozier said, before thanking the other activists for lending support.

“Everyone has a living wage and we need one, too,” said Myron Byrd, 45, a Walmart worker who was led away in handcuffs by police.

According to organizers, at least fifty-five people have been arrested during this year’s Black Friday Walmart protests.

Update: Organizers from UFCW and Our Walmart now estimate more than 110 activists have been arrested.

Re: Economists and Labor

The aversion to labor unions displayed by many middle class Americans stems from deep roots in our culture, not the least of which is one or another version of the American dream, almost all of which rest upon the lie that anyone who's willing to commit time and hard work in pursuit of success can achieve the Good Life.  They view the reliance of some upon union power as a surrender to their own weakness, lethargy, failure, or -- in some cases -- simply the fate of  "workers," among whom they do not count themselves. In truth, most Americans once held such illusions and resulting attitudes, but the Great Depression yanked millions out of that stupor and stimulated a labor movement that changed American society and broadened widely the middle class.  One may hope that the Great Recession will, in the end, have led to a similar transformation, but here's much work to do.
James A Young
President emeritus, Harrisburg Region
Central Labor Council
Professor of History emeritus, Edinboro
University

RE: he Top 10 Myths About Working Retail - At the holidays and Beyond

Thanks for this, Stephanie.  I especially appreciate it because after working many years in medical offices my sister recently experienced several years on unemployment and now works retail at Rite Aid, which is organized in NY by 1199--so she gets a low wage ($9 and change an hour, I think) but at least has great health benefits and can get a pension if she works 10 years.  She is 58.  She likes the job (Wellness Associate) except that she has to be on her feet for seven hours a day, which is causing health problems.  So the piece rings true both personally and politically for me.  Debby