How Inequality Became as American as Apple Pie

The word “inequality” makes conservatives uncomfortable, as if it invokes class struggle, the 99 percent versus the 1. They much prefer “mobility,” which connotes a purely aspirational relationship to wealth and the wealthy. 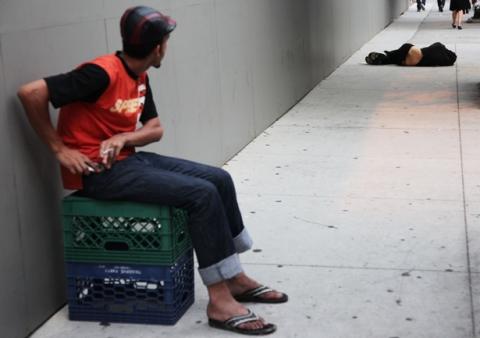 Last week, five days after Black Friday’s Walmart strike and the day before a nationwide fast-food workers strike, President Obama delivered a speech at the Center for American Progress about economic disparity and low wages. The president didn’t mention the strikers, but his talking points weren’t so different from their rallying cries—he called for a higher minimum wage and supported the right to organize. His speech was too sweeping, too ambitious to focus on the week’s news. He spoke about Abraham Lincoln and Teddy Roosevelt, education and the tax code; he provided statistic after statistic about the severity of inequality in the United States. The thread that tied all these points together was “economic mobility.” (“President Speaks on Economic Mobility,” the banner of the White House website read.) The president may have been speaking to a room full of liberals, but his focus on mobility rather than inequality seemed especially marketed to conservatives. It was Obama at his campaign finest, recasting himself as the great uniter between the two parties. “The idea that so many children are born into poverty in the wealthiest nation on Earth is heartbreaking enough,” the president said, “But the idea that a child may never be able to escape that poverty because she lacks a decent education or health care, or a community that views her future as their own, that should offend all of us and it should compel us to action.” Poverty, in other words, is a sad but inevitable consequence of a competitive economy—it’s “heartbreaking,” but so it goes—while mobility is essential to the American mission. Children, we can all agree, should at least be given the bootstraps by which they can pull themselves up.

The word “inequality” makes conservatives uncomfortable, as if it invokes class struggle, the 99 percent versus the 1. They much prefer “mobility,” which connotes a purely aspirational relationship to wealth and the wealthy. As Representative Paul Ryan writes on the Budget Committee’s website, “The question for policymakers is not how best to redistribute a shrinking economic pie. The focus ought to be on increasing living standards, expanding the pie of economic opportunity, and promoting upward mobility for all.” (Italics his) “Our job here is not to divide the American people,” Speaker John Boehner has said. “It’s to help every American have a fair shot at the American dream.”

The day of the president’s speech, Pew released a study, “Mobility and the Metropolis,” comparing rates of social mobility in different cities. New York City fared terribly, with a social mobility rate below that of Chicago, Los Angeles and even Newark. New York was also found to be the most economically segregated of the thirty-four cities studied (a dynamic illustrated by this map). The authors of the study argue that geographically concentrated poverty is more likely to reproduce itself and that heightened segregation is preventing upward mobility for most urban residents.

Mayor-elect Bill de Blasio has promised to reverse economic segregation by requiring developers to create below-market housing. When de Blasio talks about mandatory inclusionary zoning, or any of the tenets of his “tale of two cities” campaign, he talks about poverty reduction rather than “mobility” and it’s this minor rhetorical difference that renders Obama a friend and de Blasio a foe in the eyes of some conservatives. In his speech last week, President Obama expressed his support for early childhood education. “I’ve also embraced an idea that I know all of you at the Center for American Progress have championed—and, by the way, Republican governors in a couple of states have championed—and that’s making high-quality preschool available to every child in America,” he said. De Blasio has promised to create an early childhood education program and to fund it by raising the income tax on families making more than $500,000 by one half of one percent. In President Obama’s telling, such programs have bipartisan appeal, but de Blasio is said to be driving wealthy New Yorkers to leave the city. New Jersey Governor Chris Christie recently invited the wealthiest New Yorkers to move south and evade de Blasio’s tax hikes; Tom Foley, the Republican gubernatorial candidate in Connecticut, invited them north.

This is silly. Wealthy New Yorkers are not going anywhere. Stanford sociologist Cristobal Young and Princeton sociology student Charles Varner have shown that there was not a millionaire migration out of New Jersey or California after higher taxes were implemented; in both cases, taxes were higher than what de Blasio has proposed, as The Atlantic Cities recently reported.

But the story pervading New York, as well as the rest of the country, is that of inequality. It might not be as politically expedient, but it deserves telling, too.

[Jessica Weisberg has written for The New York Times, the Guardian, The New Yorker, The American Prospect and many other publications. Her reporting on immigration has been honored with fellowships from the McCormick Foundation and the Institute for Journalism and Justice.]