Blame interest-rate swaps, not retirees, for the Motor City’s downfall. 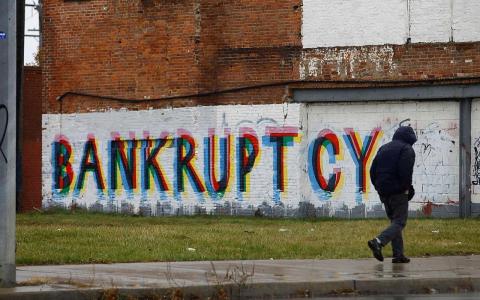 During my family's Thanksgiving meal this year, a relative asked me about the Detroit bankruptcy. "How much are we going to give them this time?" he asked sardonically as we sat down to eat. Nothing, I said; Detroit's retirees would lose about 80 cents on the dollar. But my relative's question wasn't about the cost of preserving the hard-won institution of retirement or the ways in which we could meet that cost. Rather, it was an implication that unionized public workers are responsible for the current budgetary crisis in the city of Detroit.

That assumption is widespread. It shapes political debate far beyond the state of Michigan and suffuses the public's understanding of how municipal finance works. As a symbol of postindustrial decline and the legacy of labor unionism, Detroit stands out not only for its hollow factories and shrinking tax base but also for the ways in which its bankruptcy reveals the public assumptions limiting political debate today.

The reality is that union jobs are hardly the last thing the city has chosen to cut. As former Goldman Sachs investment banker Wally Turbeville recounts in a report Demos, over the past five years, Detroit has reduced its salary expenses by 30 percent. More than 2,350 public jobs have been cut, accelerating the city's already notable pace of deterioration. Far from uncontrollable, the cost of health benefits for the city's public workers and retirees has risen more slowly than the national rate of 4 percent a year. Since 2008, Detroit has reduced its spending by more than $400 million. In the same period, city revenues have fallen by nearly $260 million, with a steep decline after 2011. This decline, rather than its pension obligations, more than accounts for the city's projected deficit this year of $198 million.

One consequence of these cuts is that public services like transportation, infrastructure maintenance and education are barely functioning. And yet there is one expense that has, so far, been spared: service fees on derivatives that were sold to the city by banks backed by UBS and Bank of America. In fact, these fees are the only significant increase in spending over the past five years.

The derivatives at the heart of Detroit's rapid decline are interest-rate swaps, and they have been pushing up the cost of servicing Detroit's debt for the past five years. Popular before the crash, swap agreements allow two parties to exchange, or swap, interest payments. During the boom years of low short-term interest rates, the swaps offered cities across the United States an unorthodox strategy to borrow money, and many local governments, squeezed by stagnant wages and plummeting top marginal income-tax rates, turned to lenders to fund previously secure public services. The swaps were advertised as a cheap way of borrowing, though they are designed to get more expensive under an expansionary monetary policy. They also came with sharp thorns that sank deeply into city budgets when governments tried to exit them. Today their damage is apparent. They have caused municipal bankruptcies from Jefferson County, Ala., to San Bernardino, Calif., and wrought budgetary distress in hundreds of other local governments.

In Detroit the derivatives were issued in 2005 and 2006 as part of a money-raising deal structured to avoid surpassing debt limits and getting voter approval for loans made to the city. The risky lending may have raised money in the short term, but it exacerbated the damage caused by the 2008 financial crash. Not only did the crisis cause the city's property values to fall, resulting in lower tax revenues, but it also raised the cost of servicing Detroit's debt as the Federal Reserve cut interest rates to stimulate borrowing in the resulting recession. Under the terms of the swap, the interest rates the city was paying were fixed to higher prerecession levels, while the interest payments the city received from the banks in return were pegged to the Federal Reserve's new postrecession interest rates, which by then had dropped precipitously. This greatly increased the costs of servicing the debt issued in 2005 and 2006.

The banks knew these deals were risky, but they were protected from any potential fallout: If one payment was late, they could terminate the agreement and demand their projected profits in full. Desperate to avoid such an event, Detroit has imposed severe austerity in order to come up with the cash. So far, it has managed to avoid late payments. But there remain other so-called termination triggers in the debt deal, including one that the city could not avoid: In 2009, Detroit had its credit rating downgraded, allowing Bank of America and UBS to cancel one of the swaps and demand $450 million dollars immediately. The city could not pay the fee and had to agree to increase the amount of its fixed payments, while allowing an insurance company guaranteeing its debt to place a lien on designated tax revenue.

"Having lost nearly everything else in the crash, the city has been unable to rid itself of the swap payments and fees it must pay Bank of America and UBS."

In late 2011, suffering from those increased payments, a continuing recession and further reductions in state revenue sharing from Gov. Rick Snyder's administration, Detroit took out a loan to exit one of the swap deals altogether. The cancellation fee was $547 million. The deal had gone so poorly that the city raised new debt just to escape it, all the while continuing to cut jobs and services. Having lost nearly everything else in the crash, the city has been unable to rid itself of the swap payments and termination fees it must pay Bank of America and UBS on the prerecession deals

Last week the city was told it was allowed to cut its debt load; it is now widely assumed that the existing cash flow problem can be resolved only at the unfortunate - but necessary - price of cutting retirements. This is not true. This year's projected $200 million deficit (setting aside reports that the debt load it's based on is severely inflated) could be found in a combination of state aid, the collection of unpaid taxes, negotiations with the banks and closing corporate loopholes. With investment in the city on the rise, protecting the pensions of Detroit's 20,000 retirees is not impossible.

For Detroit's emergency manager Kevyn Orr, this solution is out of the question. Orr was granted expanded powers, including the right to abrogate the collective bargaining contracts of public-sector unions, ostensibly to avoid a bankruptcy altogether. Now that he's successfully filed anyway, he is hustling for a new $350 million loan (with a $120 million service fee) from Barclays to pay off Bank of America and UBS so that the city can exit its remaining swap deal. This would remove the swap fees from the bankruptcy proceedings - fees that, after several years, could finally fall with a rise in the Fed's short-term borrowing rates.

As it prepares for bankruptcy, the city continues to pay its fees to the banks diligently. The public sector pays for the mistakes of the financial sector, and observers are led to believe that the basic promise of retirement is the city's problem.

On Tuesday, Orr will be told whether he is allowed to move forward with his plan to further expose public funds to the financial sector's risky bets. One can only hope the judge will deny him this request.

[Andrew Elrod is a writer living in New York. He is a contributor and former intern at Dissent, and his writing has been also appeared in n+1 and In These Times. He is from Texas.]

[Thanks to the author for sending this article to Portside.]