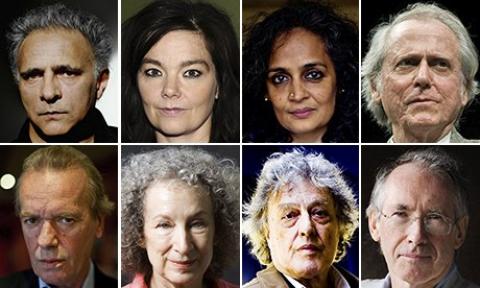 More than 500 of the world's leading authors, including five Nobel prize winners, have condemned the scale of state surveillance revealed by the whistleblower Edward Snowden and warned that spy agencies are undermining democracy and must be curbed by a new international charter.

The signatories, who come from 81 different countries and include Margaret Atwood, Don DeLillo, Orhan Pamuk, Günter Grass and Arundhati Roy, say the capacity of intelligence agencies to spy on millions of people's digital communications is turning everyone into potential suspects, with worrying implications for the way societies work.

They have urged the United Nations to create an international bill of digital rights that would enshrine the protection of civil rights in the internet age.

Their call comes a day after the heads of the world's leading technology companies demanded sweeping changes to surveillance laws to help preserve the public's trust in the internet – reflecting the growing global momentum for a proper review of mass snooping capabilities in countries such as the US and UK, which have been the pioneers in the field.

The open letter to the US president, Barack Obama, from firms including Apple, Google, Microsoft and Facebook, will be followed by the petition, which has drawn together a remarkable list of the world's most respected and widely-read authors, who have accused states of systematically abusing their powers by conducting intrusive mass surveillance.

The Guardian has published a series of stories about the mass surveillance techniques of GCHQ and its US counterpart, the NSA, over the past six months; two of the most significant programmes uncovered in the Snowden files were Prism, run by the NSA, and Tempora, which was set up by GCHQ. Between them, they allow the agencies to harvest, store and analyse data about millions of phone calls, emails and search-engine queries.

Though Tuesday's statement does not mention these programmes by name, it says the extent of surveillance revealed by Snowden has challenged and undermined the right of all humans to "remain unobserved and unmolested" in their thoughts, personal environments and communications. "This fundamental human right has been rendered null and void through abuse of technological developments by states and corporations for mass surveillance purposes," the statement adds.

Demanding the right "for all people to determine to what extent their personal data may be legally collected, stored and processed", the writers call for a digital rights convention that states will sign up to and adhere to. "Surveillance is theft. This data is not public property, it belongs to us. When it is used to predict our behaviour, we are robbed of something else – the principle of free will crucial to democratic liberty."

McEwan told the Guardian: "Where Leviathan can, it will. The state, by its nature, always prefers security to liberty. Lately, technology has offered it means it can't resist, means of mass surveillance that Orwell would have been amazed by. The process is inexorable – unless it's resisted. Obviously, we need protection from terrorism, but not at any cost."

The intervention comes after the Guardian and some of the world's other major media organisations, including the New York Times, the Washington Post and Der Spiegel, began disclosing details of the extent and reach of secret surveillance programmes run by Britain's eavesdropping centre, GCHQ, and the National Security Agency.

The revelations have sparked a huge debate on the legal framework and oversight governing western spy agencies. Obama has launched a review of US intelligence operations, and earlier this month the UN's senior counter-terrorism official, Ben Emmerson, announced an investigation into the techniques used by both US and British intelligence agencies.

Civil liberties groups have criticised the UK government for putting intense political pressure on the Guardian and other media groups covering the leaks rather than addressing the implications of the mass surveillance programmes that have been uncovered. But campaigners hope Tuesday's statement will increase the pressure on governments to address the implications of the Snowden revelations.

"International moral pressure is what's needed to ensure politicians address the mass invasion of our privacy by the intelligence services in the UK and US," said Jo Glanville, from English Pen, which along with its sister organisations around the world has supported the Writers Against Mass Surveillance campaign. "The signatories to the appeal are a measure of the level of outrage and concern."

Tuesday's statement is being launched simultaneously in 27 countries, and organisers hope members of the public will now sign up through the change.org website.

Eva Menasse, one of the small group of international writers who initiated the project, said it began with an open letter from a group of authors to the German chancellor, Angela Merkel, when the first Snowden revelations came to light. "When we started, we did not know how far we would get. But more and more colleagues joined us and within the last weeks we were sitting at our computers day and night, using our networks as more people came forward. This started as an entirely private initiative, but now has worldwide support."

Another author who helped set up the campaign, Juli Zeh, said writers around the world had felt compelled to act: "We all have to stand up now, and we as writers do what we can do best: use the written word to intervene publicly."

Winterson told the Guardian she regarded Snowden as a "brave and selfless human being"."We should be supporting him in trying to determine the extent of the state in our lives. We have had no debate, no vote, no say, hardly any information about how our data is used and for what purpose. Our mobile phones have become tracking devices. Social networking is data profiling. We can't shop, spend, browse, email, without being monitored. We might as well be tagged prisoners. Privacy is an illusion. Do you mind about that? I do."