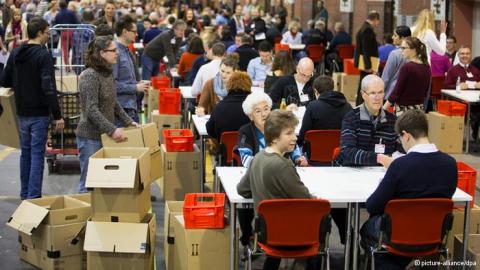 Let me begin with food, fast food. Let me invite you in. Looking around, there’s no denying it, this is Burger King. It could be in Augusta, ME or Anaheim, CA, and the fatty Whoppers taste the same. But it’s not, most customers here speak German, some maybe Turkish (the biggest minority). For this is in Augsburg, one of Germany’s three oldest cities, founded in 15 B.C.. It is in Bavaria so you pay, not with dollars and cents but with euros and cents. But here too, usually too much.But just as in Anaheim or elsewhere in 88 different countries, Burger King personnel has its hands full - no idling, always a smile for the customers even though, like elsewhere, they are bitterly underpaid. But in Augsburg there are a few differences. Thanks to a contract and some hard-won government laws they have been protected against arbitrary firings and guaranteed things like work regulations, medical care and paid pensions. And in Augsburg, as in 38 of Burger King’s 700 German franchises, they also have a shop council to look after their rights and benefits. Not many - but important!

Last May two well-heeled businessmen, one a Russian millionaire, bought up 91 franchises, the biggest single lot, mostly in the west and southwest and four of them in Augsburg. Competition with McDonald’s, double in number, is rough and tough. But the two men, glancing across the Atlantic, had plans to make it pay. Within a week they announced that they would no longer keep to the contract; they would cut wages from a hungry 8.50 euro average down to a starvation average of 6.50 or 7.50, no longer pay for time spent donning their uniforms and would bar shop councils from their contractual right to join in making decisions on work and vacation schedules.

But unlike many colleagues, these Burger King workers had a big national union, which went to court and prevented this arbitrary dissolution of the contract.

The owners tried a new tack. Employees without shop councils are far weaker, so where they existed they must be broken, if possible by isolating elected members and leaders from the rest of the crew. They started firing them, using any phony charge they could dig up. In Augsburg they accused a council member of pocketing receipts: the video observation tape will prove otherwise, he insists, but he must go to court. They claimed that one council man had taken days of sick leave thanks to a doctor who “willingly wrote anyone sick” when requested. This was proved a dud. A 63-year-old employee was fired for “idling” and charged 49,000 euro in back pay until it was shown that he had an agreement temporarily reducing his hours of slinging hamburgers because of shop steward duties. Another man was ousted for taking home a handful of six or seven tiny ketchup envelopes. Few if any charges were legitimate but, currently in fifteen cases, they tied up the local union with litigation (two council members were fired for testifying for a colleague at one such trial). It was all aimed at dividing and frightening employees, who were burning mad since the company held back on normal extra overtime and night work pay - and often delayed paying wages altogether.

But a new fighting spirit is developing. There are no strikes as yet but while some still serve Whoppers inside, others take turns outside, defy both rotten weather and rotten bosses with demonstrations, collecting signatures, protest postcards, and local support. Although the company has hired a leading union-buster lawyer to sue the union for alleged libel, it continues to fight for those fired while organizing for a possible big fight, which could hit not only Burger King but even affect McDonald’s, where there are no shop councils at all, and perhaps the 9000 employees in Amazon plants in Germany, who have already been engaged in many mostly local, one-day strikes. Across the Danube in the neighboring state of Baden-Württemberg, 100,000 retail workers did strike and were able to win some key gains, and also 25,000 new union members in the bargain.

These conflicts serve as a background for the big issue affecting everyone in Germany. Will the Social Democrats (SPD) join Angela Merkel’s Christian Democrats (CDU) and their Bavarian sister party (CSU) and at last form a “Grand Coalition” government - nearly three months after the elections?

In those many weeks and a final meeting lasting seventeen hours, the three parties worked out an  agreement, 226 pages long, on all aspects of government policy. But in an unprecedented step, the Social Democrats, faced by plenty of skeptics, had decided on a referendum of all their 475,000 members. The votes will be counted by December 14th; if a majority approves there should be a new government within three days, with Merkel at the helm, six ministers each for SPD and CDU and three for the CSU.

But will they approve it?  At first, many loudly said NO! The coalition would mean abandoning many issues stressed by the SPD in its election campaign. One was the adoption of a minimum wage for Germany. Another was a rise in taxes for the wealthiest individuals and corporations to finance better, earlier pensions, education and, with  roads and bridges rapidly decaying, infrastructure.  The final compromise was worse than expected. One concession by the Merkel forces: a minimum wage of 8.50 euro would be adopted, but not until 2015, with vague exceptions lasting until 2017. Even 8.50 is low, too low to guarantee a barely humane pension. Another sop for the SPD: the postponement of pension age to 67, introduced by the SPD and the Greens when they ruled the roost, would remain in place, but those who had worked regularly for 45 years could retire at 62.

There would, however, be no tax increases on the wealthy, health costs would rise, for workers not employers, and with a balanced budget planned for 2015 no-one could say where funds for improvements would come from. Foreign policy aims like squeezing southern members of the European Union and building up special military forces were left unchanged, and a decision on military drones left suspiciously vague.

Every party has an independent youth pendant. The Young Socialists usually stand to the left of their well-established elders and proved it again by rejecting SPD-boss Sigmar Gabriel's call to approve the coalition. Some even praised the idea of an SPD and Green coalition with the LEFT, despite the taboo. SPD boss Gabriel said the LEFT should first clear up the question of anti-Semitism in its ranks - a criticism based on opposition by many LEFT members to the policies of Israel and support of the Palestinian cause, including some deputies who took part in the flotilla to Gaza in 2010. Many booed him, and one young Socialist called out: “Go check on the racists in the Christian Democratic Union!” Gabriel twisted this into an invented charge that the whole CDU was racist and rebutted that - but soon, in a huff, left the meeting, which voted against approving the coalition agreement.

But the required twenty percent of the members has already sent in ballots and it looks as if the voters will approve by next weekend so the Christmas package - a new government - will be packaged and ready for Saint Nick and his reindeer to deliver. But among angry mumbling at grass roots level could be heard a form of prediction. Someone had recalled the words of the great writer Bertolt Brecht (who, incidentally, was born in Augsburg). In attacking the aggressive rearmament of West Germany in the 1950’s he utilized ancient history with the dire warning: “Great Carthage waged three wars; it was still powerful after the first one, still inhabitable after the second. It could no longer be found after the third one.” The current word-switch is based on the fact that the SPD, after its first such “Grand Coalition” was somewhat weakened and after the second severely weakened …

In the midst of such debates and discussions came the news of Nelson Mandela’s death. All the media joined in the mourning, of course, outdoing one another in praising the old leader, mostly painting a rosy picture of a great conciliator and western-style democrat, somehow smoothing over or ignoring his clear endorsement of armed struggle, his support for Cuba and the Palestinians, his lasting alliance with the Communists. And what they also forgot: while the East German Democratic Republic supported the African National Congress in countless ways, printing its vital exile newspaper Sechaba and providing training to many of its members and future leaders, government and business interests in the Federal Republic, joining those in Britain, the USA and most western countries, backed the apartheid governments almost till the end. Despite all UN resolutions, Daimler, Krupp, the Deutsche Bank and others made over 4 billion euro in profits from dealing with South Africa. This included weaponry of many kinds used to intimidate and kill people and destroy the freedom movement. In those days they castigated the ANC, including Mandela, as Communist terrorists.

But memories are short. Forget that sometimes nasty or dangerous past, bury the truth, turn poor Mandela into a sweet - and harmless - angel of peace, just fitting for the Christmas spirit. Ho ho ho!