From Silicon Valley, the Rocketship chain of charter schools is hoping to expand across the country. It’s backed by some of the biggest names in the tech world and claims high test scores. But what are these schools preparing kids for? And what are the real costs of Rocketship's low-cost model? 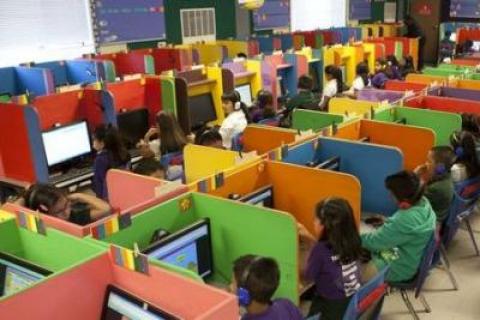 A Rocketship charter: Is it a school or a miniature call center? While experimenting on working-class kids, Silicon Valley elites send their kids to private schools like Waldorf Peninsula, whose philosophy is to avoid computers, Labor Notes

From Silicon Valley, the Rocketship chain of charter schools is hoping to expand across the country. It’s backed by some of the biggest names in the tech world and claims high test scores.

Rocketship leaders brag that they think outside the box. Teachers, for instance—who needs them? The company says it saves half a million dollars a year by using fewer teachers, replacing them with non-certified instructors at $15 per hour.

These instructors monitor up to 130 kids at a time in cubicles in the schools’ computer labs. Rocketeers, as students are called, sit looking at computer screens up to two hours per day, supposedly learning by solving puzzles.

Business leaders such as Bill Gates often stress the need to train kids for the jobs of the future—digital animators, nanotech engineers? But it looks more like the Rocketeers are being prepared for online “microtasks” at Crowdflower, which contracts out data categorization and de-duplication.

According to a recent wage and hour lawsuit, these microtaskers are often paid as little as $2 an hour.

Overall, the growth these days is not in skilled, middle-class jobs like public school teaching—which is shrinking, thanks to charter chains like Rocketship—but in low-wage jobs.

It’s no coincidence that Rocketship employs the same kind of de-professionalized, non-union workforce it seems to be training. Half its teachers have less than two years’ experience; 75 percent come from Teach for America.

Critics of the Rocketship model cite the American Association of Pediatrics, which recommends less than two hours of screen time per day—total.

When you figure in that kids will be on computers and phones when they aren’t in school, too—they spend on average seven hours a day on various devices as it is—it raises a red flag.

Skeptics say the Rocketship test scores just demonstrate the schools are focusing on test preparation at the expense of arts, languages, and real learning.

Rocketship’s board and advisors represent the Gates, Walton, and Broad Foundations—familiar faces in corporate “education reform.” Benefactors include Facebook, Netflix, and Skype.

Rocketship’s schools are in California, Wisconsin, and Tennessee with plans to expand into Indianapolis, D.C., and New Orleans: 25,000 students by 2017.

Rocketship targets low-income students, making them the guinea pigs for the cubicle model of education.

Who doesn’t like their kids being experimented on? As Bill Gates once said, “It would be great if our education stuff worked, but that we won’t know for probably a decade.”

In fact, the chain is already scrapping the 100-cubicle learning labs for its older students, fourth and fifth graders. Students weren’t always engaged, and sometimes were just staring at the screen and guessing.

To hear their enthusiasm, you might imagine the tech elites would be dropping their kids off every day for these cutting-edge education experiments. But instead, many Silicon Valley leaders send their kids to private schools like Waldorf Peninsula—whose philosophy is to avoid computers, arguing that they hurt children’s development and attention spans.

Those who can afford private schools choose those that offer creative, hands-on learning, small classes, arts, and teacher-student interaction. But apparently the cubicle is good enough for everyone else.

Somehow, it doesn’t seem like a coincidence that these business leaders’ model spends public education dollars on their own products. Education is a half-trillion-dollar industry. See here for another example: L.A. schools give every student and teacher an apple—an iPad, that is.

“Slingshot” is a column where Labor Notes staffers take aim at issues of the day.

Samantha Winslow is a staff writer and organizer with Labor Notes.samantha@labornotes.org