Amazon Workers Battle Their Bosses in Seattle and Germany

Following a day of massive walkouts at three logistics centers in Germany on Monday in which a record 1,800 people participated, Amazon workers continued their strikes in Leipzig and Bad Hersfeld. In Seattle, multiple unions turned out to protest Amazon in solidarity with their union brothers and sisters in Germany. 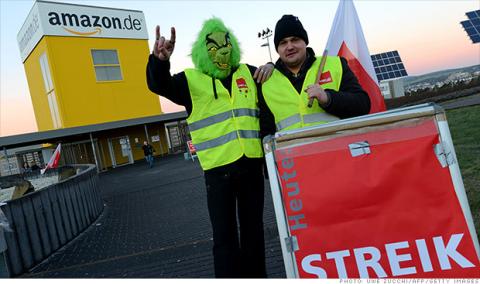 Amazon Germany handled 2.7 million orders on December 17, 2012 but says this week's strike has so far had no effect on shipments.,Uwe Zucchi/AFP/Getty Images

SEATTLE While hundreds of Amazon workers in Germany were out on strike today, German union leaders hooked up here with some 50 protesting workers and U.S. labor leaders at Amazon's world headquarters. The action here drew the support of a dozen unions representing tens of thousands of workers in the state of Washington.

The strikes today by 700 workers at Amazon's warehouse in Bad Hersfeld and more than 200 in the company's facility in Leipzig are part of the first wave of strikes ever, anywhere in the world, against the e-commerce behemoth.

Among the Germans protesting in Seattle today were representatives from the German union, Ver.di (the United Services Union) and a worker from an Amazon warehouse in Germany. Among the U.S. unions turning out people for the protest against Amazon here today were the United Food and Commercial Workers Union, the Teamsters, the Communications Workers of America, the Service Employees International Union, Unite Here, the American Federation of State, County and Municipal Employees, and the Martin Luther King Jr. County Labor Council.

"We're standing in solidarity with them (the German workers)," said Kathy Cummings, communications director of the Washington state AFL-CIO, which organized the protest in Seattle today. "We are asking that Amazon respect the union there in Germany and negotiate in a way that is acceptable to Ver.di.

"We'd love for them to consider the American workers as well," Cummings said. "We haven't gotten far in organizing Amazon here. They don't respect the unions here and they don't want them in their company.

Thus far, Amazon's anti-union bias has thwarted any attempts by its U.S. warehouse workers to have a union.

Amazon's workers in Germany, however, appear determined to fight.

Ver.di is insisting upon a contract for Amazon workers that is similar to the ones in place at retail and mail-order businesses all over Germany. The union says this is only fair because Amazon workers deserve no less than all the rest of Germany's retail workers. Amazon insists on classifying its workers as logistics workers, rather than retail workers, allowing the company to pay lower rates.

"Amazon is paying low wages and the workers operate under pressure for high performance and, at best, only short contracts," said Stefanie Nutzenbegrer, a member of the union's board of directors. Union leaders decided to travel to Seattle to increase pressure on Amazon that, thus far, has refused to negotiate with Ver.di.

"Based on the philosophy of Amazon, 'work hard, have fun, make history' - one has to emphasize: it's the employees of Amazon in Germany, who are now making history by taking to the streets for their demands," said Frank Bsirske, chairman of Ver.di. "What is characterizing the corporate culture of Amazon will not be left into the hands of managers - the employees are now taking the initiative."

The German labor leaders said the joint action by German and American unions was a sign of the times.

"The act of solidarity of American unions for the strikes in Germany is a powerful sign that cooperation among workers is not bounded by national borders and continents. These protests are an encouraging response to the questionable methods of a global company like Amazon."

Workers have been stepping up pressure on high tech companies, generally, in recent months, as the companies continue to pile up unprecedented profits.

There were reports last week, for example, of protesters blocking a Google bus transporting workers to its Silicon Valley headquarters.

Amazon's announcement several weeks ago that it will pursue delivery by drones spurred widespread jokes and derisive comments not just all over the Internet but on TV comedy shows and in publications around the world.

"For the retailer, the moment when machines prepare and deliver packages could not come too soon," wrote David Streitfeld in the New York Times Dec. 16. "Humans are too much trouble."

Union leaders say that Amazon tries to convey the idea that people should be happy for the opportunity to work for a sophisticated high tech firm.

"They don't want people to realize that life at an Amazon warehouse is tough. Hi-tech or not, the bottom line is that the people in those places are performing hard physical labor," said Cummings. "These workers are the backbone of Amazon and they deserve respect, not a company that misclassifies and then refuses to talk to them."

Amazon says it prefers to resolve employment issues directly with workers at individual worksites rather than having to deal with a union.
__________________

Employees at logistics centers of US retail giant Amazon have continued their strike action as they hope to see management agree to talks on higher wages. Unions said it might extend the walkouts beyond this week.

Amazon workers continued their strikes on Tuesday at two locations, upholding their demand the company should accept a collective bargaining agreement for the mail order and retail sector.

So far, Amazon has treated it staff as lower-paid logistics workers and insisted employees received above-average wages for that particular sector.

Following a day of massive walkouts at three logistics centers in Germany on Monday which saw a record 1,800 people participate, Amazon workers continued their strikes in Leipzig and Bad Hersfeld, with employees in Leipzig saying they wouldn't stop before Friday.

Ratcheting up the pressure

The public-sector union Verdi said Tuesday industrial action could even be expanded right up to Christmas Eve.

"We'll certainly have the stamina to do so, not just this week," a senior Verdi official, Stefanie Nutzenberger told the daily "Neue Passauer Presse." She added it was a scandal Amazon continued to decide arbitrarily how much it paid workers, and that at a time when employees were facing all the stress of a pre-Christmas season with extremely high parcel delivery volumes .

The current strike action in Germany had been supported by several US trade unions who staged a protest rally in front of Amazon's headquarters in Seattle.

German labor union Verdi has intensified its strike action against online retailer Amazon, seeking to slow deliveries in the middle of the crucial Christmas holiday season. Amazon is rejecting a demand for higher pay.

A delegation of German workers is also set to protest at Amazon's headquarters in Seattle, in the US with the help of American labor unions, Verdi said.

In addition, the union walkout in Germany is to spread to a distribution center in Werne on Tuesday.

The German union has launched a series of industrial action against Amazon this year in support of a demand that the firm accepted a collective bargaining agreement for the mail order and retail sectors as benchmark for workers' pay. Amazon, however, regards its staff as logistics workers who are normally lower-paid but receive above-average wages by the standards of that sector.

Especially in the Christmas season, workers were doing a great job and would deserve being paid like mail order and retail workers, she told reporters.

Amazon, which employs about 9,000 workers in 8 logistics centers in Germany, has repeatedly refused to enter into wage negotiations with Verdi.