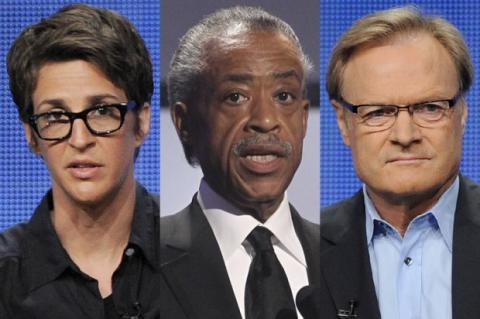 The AFL-CIO urged MSNBC hosts Wednesday to defy “fear and concern” and break their silence about NBC’s alleged anti-union “hypocrisy.” None of the five high-profile progressives they’ve targeted – Rachel Maddow, Al Sharpton, Lawrence O’Donnell, Chris Hayes and Ed Schultz – has so far directly and publicly addressed allegations that NBC-owned Peacock Productions exploited fear tactics and legal tricks to avert unionization. NBC and the five hosts did not immediately respond to Wednesday morning inquiries, or to prior requests for comment over the past week.

“These hosts have a particular responsibility,” AFL-CIO organizing director Elizabeth Bunn told Salon. “They have respect and they have clout that producers alone don’t have, and they’re part of the larger progressive movement.” She said the five anchors were “uniquely positioned to hear the stories of what their parent company is doing to workers, and broadcast that to the larger American public.” She urged them to follow the “inspirational example” of workers at Peacock Productions – a company that produces some MSNBC programming – who’ve chosen to take collective action.

“We’re speculating that there’s a level of fear and concern” among the five celebrity anchors, Bunn told Salon. “But what we’re hoping is if they meet individually or collectively with the workers,” and hear “how abhorrent this corporate behavior is,” that “as a group, they will speak out and exercise their collective voice just like workers at these production companies have exercised their voice in seeking to form a union.” Bunn blasted NBC as “guilty of hypocrisy and guilty of exploiting its workforce,” adding, “one would hope than an employer whose mission is to communicate accurately would behave more responsibly.”

As Salon first reported, Chris Hayes listened to Peacock Productions workers’ concerns at a private meeting held at the offices of the Writers Guild of America–East, according to several people present. Like his colleagues, he has not publicly addressed the workers’ allegations. WGA-E organizing director Justin Molito told Salon that Peacock Productions ran “a textbook anti-union campaign that you would see at companies like Wal-Mart” and alleged its exploitation of National Labor Relations Board delays amounted to “throwing in” with those behind the “right-wing extremist takeover” decried by MNSBC.

Following a Web petition hosted by MoveOn Civic Action, the AFL-CIO sought the five hosts’ support in a letter sent Wednesday. “What has occurred at Peacock is unconscionable,” AFL-CIO president Richard Trumka and the federation’s other two top officers told Sharpton, O’Donnell, Maddow, Schultz and Hayes in the morning missive, first reported by Politico’s Dylan Byers. They asked the hosts to “help these brave men and women appeal to Peacock and to NBC to cease their anti-union tactics. Meet with them, talk to them, call your viewers to action, and let’s make a difference together.

What would happen to them if they did? Bunn told Salon that while it was “hard for me to gauge the severity of the reaction of NBC” if hosts did side against the corporation in the labor dispute, the AFL-CIO would “do everything in our power” to avert retaliation. “It would be a terrible blow if NBC were to retaliate against hosts for doing their job, mainly shining a light on corporate abuses,” said Bunn, as “the viewers of NBC would respond accordingly.”

Bunn said the AFL-CIO, the country’s main union federation, was “prepared to escalate the pressure on these hosts” as well as on NBC. WGA-E organizing director Justin Molito welcomed the AFL-CIO letter, telling Salon in an email that the support of the federation’s 12 million members “means a lot to the writer-producers and associate producers who have shown courage” by organizing.

The only MSNBC host to respond to any of Salon’s inquiries on the issue has been Ed Schultz, who when asked about the campaign Dec. 10 emailed, “Moveon.org has never been an ally of Ed Schultz, why should I help you with a story? Give me a reason.” As I’ve reported, that response spurred social media pushback, which Schultz addressed — without directly mentioning the Peacock Productions allegations – on the Thursday, Friday and Monday episodes of his radio show. Since Salon’s original story went live last Thursday, Schultz has asked “why should I put myself in jeopardy through an email”; questioned whether he would be “able to influence” people “of authority”; and accused critics of “class envy.” He has not responded to further inquiries from Salon. Asked about Schultz’s reaction, Bunn said, “I really don’t want to react specifically to that,” because “the story is about these workers.”

While O’Donnell, Maddow, Sharpton, Schultz and Hayes could face repercussions if they heeded the call for solidarity, said Bunn, “The risk that they face is significantly less than the risk that these workers have taken every day in speaking out publicly to the press.” She added, “I’m guessing these hosts have a contract with their corporation. And that’s all these workers are looking to have.”