By reaching out to groups of people who have not traditionally been union members, we at Unifor are challenging ourselves, and the labour movement, to include in our fight those who need it the most, and by doing so, to be true to one of the most basic union principles there is. In the union's plea for economic justice, fair labour laws, decreased inequality and more, involving new members in our work can only be an asset. 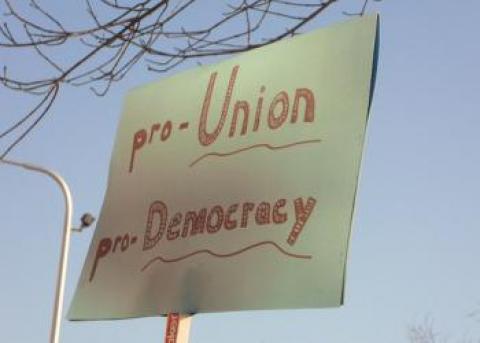 Moderator's Note: Unifor was officially formed on August 31, 2013, at a Founding Convention in Toronto, Ontario. It marked the coming together of the Canadian Auto Workers union (CAW) and the Communications, Energy and Paperworkers Union of Canada (CEP) - two of Canada's largest and most influential labour unions.

By "new groups of workers," the union is referring to the increasing number of people working in what can be qualified as the new working conditions in Canada: contract, freelance, part-time, low-waged and shift work, as well as unemployed people, student-workers and others who find themselves in a situation where they could not get a collective agreement, even if they would like to.

After a few months of making efforts to kick start the community chapters program, one thing is clear: there are a lot of people who do, indeed, want to join a union.

The new Unifor model of community chapters has generated much interest from within the ranks of the union as well as from the general public.

At the union's first of five regional council meetings held in Ontario earlier in December, a resolution to encourage local unions to explore setting up retiree's and community chapters was unanimously endorsed. The project is being received by members as one that recognizes that a union's role is to represent all working people, not just those already represented by the union. Many local unions are starting to reach out to groups of workers in their sector or region who could benefit from being members of the union.

In November, the union recognized its first two community chapters: the Canadian Freelance Union for freelancers in the media sector and Unifaith, representing workers at the United Church. These two chapters are national in scope.

Both these groups aim to protect the interests of workers in their community, and both groups have a history of working with predecessor unions. Currently, they are beating the path and helping to shape how the community chapters model will help people to organize their community of workers by working through Unifor.

As the program evolves though, it is likely that more new community chapters will be associated with local unions. A group of people who have something in common, be it their workplace, working conditions or a common interest, will be able to form a chapter by becoming members of a local union.

At the core of the program remains the idea that we are stronger when we work together, that collective action is our best bet to make gains and improve our working lives.

Whether it is to demand basic recognition at work, to break down the isolation that exists between self-employed workers, to call for an increase to the minimum wage or to help each other out in their workplaces, workers have in the community chapters a tool to aspire to something better for themselves and their families.

Very soon, members in community chapters will be able to opt in to basic health and dental benefit packages. This opportunity is likely to generate even more interest in community chapters. After all, the number of people who do not have access to basic benefits in their current employment is growing, and there is no doubt that the concerns associated with having to provide for your family's health needs can be considerable. As the program grows, so will the union's ability to offer various services to these members.

By reaching out to groups of people who have not traditionally been union members, we at Unifor are challenging ourselves, and the labour movement, to include in our fight those who need it the most, and by doing so, to be true to one of the most basic union principles there is. In the union's plea for economic justice, fair labour laws, decreased inequality and more, involving new members in our work can only be an asset.

Potential groups of people may include workers in workplaces where organizing campaigns have not yet succeeded; workers in precarious jobs; unemployed workers; students and any other group of workers hoping to improve their economic and social conditions.

To read our flyer about our community chapters and how to create one, please download the PDF: community_chapters_information_flyer.pdf

Why start a Community Chapter?

Becoming a Unifor Community Chapter member is much more than just choosing, as an individual, to join the union. It is rooted in a process of building the collective power of working people.

Community Chapters may be formed where there is a critical mass of interest among people who are not members but who wish to come together. By uniting under a Community Chapter, they can form a new structure to work together for economic and social justice in their workplace and community.

The criteria to determine if a group is eligible to create a community chapter include:

Commonality: The potential Community Chapter members must share some common interest that creates the potential for sustained shared activity. This point of commonality can be based in a workplace, a community or an interest.

Critical mass: The potential Community Chapter must show the commitment of a sufficient number of dedicated and active members.

Action plan: The potential Community Chapter must submit a clear strategy for how they will use the collective power of the union to better their conditions and win victories from employers, governments, or other campaign targets.

Union principles: The potential Community Chapter members must support the founding principles of Unifor and adhere to the Unifor Constitution.