There are many steps that we can take to end that state of affairs, but the most important is to put jobs back on the agenda. 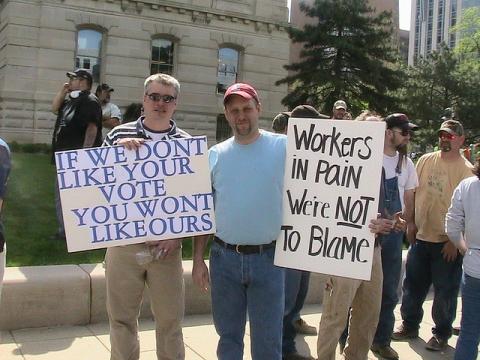 More than a million unemployed Americans are about to get the cruelest of Christmas “gifts.” They’re about to have their unemployment benefits cut off. You see, Republicans in Congress insist that if you haven’t found a job after months of searching, it must be because you aren’t trying hard enough. So you need an extra incentive in the form of sheer desperation.

As a result, the plight of the unemployed, already terrible, is about to get even worse. Obviously those who have jobs are much better off. Yet the continuing weakness of the labor market takes a toll on them, too. So let’s talk a bit about the plight of the employed.

Some people would have you believe that employment relations are just like any other market transaction; workers have something to sell, employers want to buy what they offer, and they simply make a deal. But anyone who has ever held a job in the real world — or, for that matter, seen a Dilbert cartoon — knows that it’s not like that.

The fact is that employment generally involves a power relationship: you have a boss, who tells you what to do, and if you refuse, you may be fired. This doesn’t have to be a bad thing. If employers value their workers, they won’t make unreasonable demands. But it’s not a simple transaction. There’s a country music classic titled “Take This Job and Shove It.” There isn’t and won’t be a song titled “Take This Consumer Durable and Shove It.”

So employment is a power relationship, and high unemployment has greatly weakened workers’ already weak position in that relationship.

We can actually quantify that weakness by looking at the quits rate — the percentage of workers voluntarily leaving their jobs (as opposed to being fired) each month. Obviously, there are many reasons a worker might want to leave his or her job. Quitting is, however, a risk; unless a worker already has a new job lined up, he or she doesn’t know how long it will take to find a new job, and how that job will compare with the old one.

And the risk of quitting is much greater when unemployment is high, and there are many more people seeking jobs than there are job openings. As a result, you would expect to see the quits rate rise during booms, fall during slumps — and, indeed, it does. Quits plunged during the 2007-9 recession, and they have only partially rebounded, reflecting the weakness and inadequacy of our economic recovery.

Now think about what this means for workers’ bargaining power. When the economy is strong, workers are empowered. They can leave if they’re unhappy with the way they’re being treated and know that they can quickly find a new job if they are let go. When the economy is weak, however, workers have a very weak hand, and employers are in a position to work them harder, pay them less, or both.

Is there any evidence that this is happening? And how. The economic recovery has, as I said, been weak and inadequate, but all the burden of that weakness is being borne by workers. Corporate profits plunged during the financial crisis, but quickly bounced back, and they continued to soar. Indeed, at this point, after-tax profits are more than 60 percent higher than they were in 2007, before the recession began. We don’t know how much of this profit surge can be explained by the fear factor — the ability to squeeze workers who know that they have no place to go. But it must be at least part of the explanation. In fact, it’s possible (although by no means certain) that corporate interests are actually doing better in a somewhat depressed economy than they would if we had full employment.

What’s more, I don’t think it’s too much of a stretch to suggest that this reality helps explain why our political system has turned its backs on the unemployed. No, I don’t believe that there’s a secret cabal of C.E.O.’s plotting to keep the economy weak. But I do think that a major reason why reducing unemployment isn’t a political priority is that the economy may be lousy for workers, but corporate America is doing just fine.

And once you understand this, you also understand why it’s so important to change those priorities.

There’s been a somewhat strange debate among progressives lately, with some arguing that populism and condemnations of inequality are a diversion, that full employment should instead be the top priority. As some leading progressive economists have pointed out, however, full employment is itself a populist issue: weak labor markets are a main reason workers are losing ground, and the excessive power of corporations and the wealthy is a main reason we aren’t doing anything about jobs.

Too many Americans currently live in a climate of economic fear. There are many steps that we can take to end that state of affairs, but the most important is to put jobs back on the agenda.