Bigotry and ignorance join forces to deny the existence of black nuns in Europe. No surprise that it's bad history. 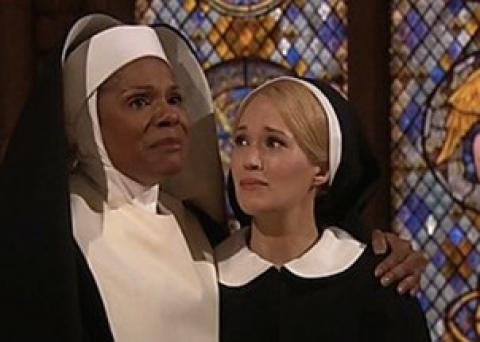 Earlier this month, veteran stage actress Audra McDonald gifted audiences with yet another sublime performance in NBC’s live remake of The Sound of Music.

While the overall production received mixed reviews, critics across the country heralded McDonald’s portrayal of Mother Abbess and her soul-stirring rendition of “Climb E’vry Mountain” as the television week’s top highlight, with Time calling her "the show-stealer of the night."

Despite such acclaim, McDonald’s portrayal of the majestic Mother Abbess was not without its detractors. But negative reviewers had nothing unflattering to say about the five-time Tony Award winner’s acting or vocal abilities—instead, their opposition was chiefly rooted in the portrayal of the often-overlooked Mother Abbess as a black woman.

“We turned it off after we saw a negro nun,” tweeted dave44s. “No negro species in the Sound of Music.” (Note: dave44s’s sentiment was retweeted over 200 times before his Twitter account was suspended.) Mike Greenberg of the ESPN sports talk show Mike and Mike also objected to the new production, arguing that it should not be performed. “They don’t rewrite history books,” he fumed.

Despite spewing such vitriol, detractors maintained that their opposition to McDonald’s Mother Abbess was not driven by racial bigotry but instead by a desire for “accurate” history. One commenter, Will506, went so far as to write,

“Audra McDonald did not belong in the Sound of Music as a black abbess in the Austria of 1938. It is a factual impossibility and respectful negative reaction to that represents not hate speech but a comment on 2013 political correctness run amok.”

One can easily point to the existence of the Sudan-born St. Josephine Bakhita, who was stationed at an Italian convent less than 200 miles from the Austrian border in 1938, to begin to refute such a claim. But the confidence with which detractors rejected the historical possibility of black nun in the Austria of 1938, along with the fact that the claim went unchallenged, even by McDonald’s staunchest supporters, demands further attention.

To say that there could not have been a black nun in a European convent in the modern era not only demonstrates a profound ignorance of the long and rich history of black Catholic nuns in the Atlantic world, but also reflects the egregious limitations of the white American racial imagination, which has for centuries equated blackness with moral debasement and vehemently denied the existence of “a virtuous black woman.”

Despite the Catholic Church’s long (and painful) history of racial exclusion and segregation in its religious ranks, thousands of black women have dared to profess the sacred vows of poverty, chastity, and obedience in the Atlantic World. In doing so, they provided a powerful refutation to whites who characterized Africa-descended people as sub-human and used the ideology of white supremacy and racist manipulations of the Bible to justify African enslavement and racial segregation.

Although the overwhelming majority of the world’s black Catholic sisters served (and continue to serve) in the Americas and Africa, the presence of black nuns in European convents is not a recent phenomenon. In fact, one of the first documented black nuns in Europe was Louise Marie-Therese, the famed Black Nun of Moret, who took the religious habit in 1695 and remained at Benedictine abbey at Moret-sur-Loing in France until her death in 1732.

Kidnapped off the coast of present-day Ghana and sold into Spanish slavery as a child around 1686, Venerable Teresa Chikaba entered the Convent Dominican Sisters of Saint Mary Magdalene in Salamanca, Spain in 1703 and professed her vows as Therese Juliana of Saint Dominic in 1704. Generally regarded as the first black nun in a Spanish cloister, Chikaba remained in the convent until her death in 1748. She is currently under consideration for sainthood.

In the nineteenth century, several American-born women of African descent also became nuns in Europe. Barred from becoming fully-professed sisters in white and indigenous congregations in the Americas because of their race, these black women crossed the Atlantic Ocean to embrace the religious state. While the majority of these women were extremely-light skinned and could pass for white, at least three dark-skinned, U.S.-born black women of slave heritage entered European congregations in the nineteenth century. Fredericka Law of Savannah, Georgia, for example, received the habit of Missionary Franciscan Sisters of the Immaculate Conception at the Shrine of Portiuncula in Assisi, Italy in 1882. She took the religious name of Sister Benedict of the Angels and professed her perpetual vows on her deathbed one year later. She is buried in Rome.

Europe’s most famous black nun is undoubtedly St. Josephine Bakhita, who spent twelve years as a slave in Sudan and Italy before her emancipation in 1889. She entered the novitiate at the Institute of the Catecumenate in Venice, Italy in 1893 and professed her vows as a Canosian Sister on December 8, 1896. Affectionately called Mother Moretta, or “our Black Mother,” St. Josephine Bakhita persevered in religious life through the rise and fall of the Third Reich until her death in 1947. She was canonized by the Catholic Church in 2000.

Although there is no known documentation of black Abbess in Austria in 1938, she certainly could have existed. Indeed, if St. Josephine Bakhita could exist as a black nun in a white congregation in Mussolini’s Italy, imagining a black nun in a white congregation in nearby Austria is not that far-fetched. Moreover, if hundreds of free and enslaved black nuns could exist in the brutal slave societies of the Americas, surely the decision to portray Mother Abbess as a black woman in a 2013 production of The Sound of Music should not rack the mind.