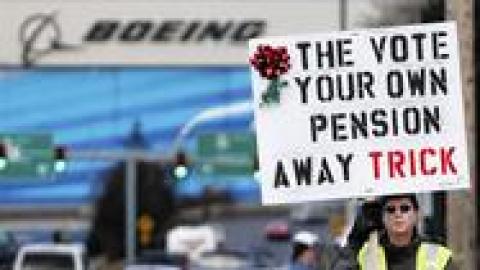 SEATTLE — Waving angry signs and clenched fists, several hundred union members rallied Thursday afternoon for a vote against a contract that would cut their benefits but guarantee that Boeing Co. builds its latest wide-body jet in the Puget Sound area.

"This is the fight of our lives," said local union leader Wilson Ferguson of the International Assn. of Machinists and Aerospace Workers as the raucous crowd in the union's hall cheered. "This is the front line of the labor movement right now. Thank you for coming out and supporting us."

The machinists union, which represents more than 31,000 Boeing workers in Washington state, is planning to vote Friday on a contract aimed at keeping the aerospace giant's 777X project in the region.

It is the second time in two months that IAM District 751 members will vote on a proposal by Boeing, the biggest private employer in the state with about 82,500 employees and a crucial part of the regional economy.

Boeing has opened a nationwide sweepstakes, asking other states to submit incentive-laden proposals if a deal with the union doesn't come through. The company said it received proposals from 22 states, including California. Many submitted multiple sites.

The labor dispute drew the attention of Southern California lawmakers still reeling from Boeing's decision in September that it would close the C-17 Globemaster III cargo jet plant in Long Beach in 2015. The plant is now being considered as a potential home for the 777X.

Washington is still in the running to build the twin-aisle jet, but it is unclear whether Boeing would move forward without a deal with the machinists union.

Moving the assembly line out of the Puget Sound area would be staggering to the Seattle area, where Boeing was founded in 1916. It is estimated that the 777X would be responsible for 10,000 jobs.

The public ordeal has drawn national attention since the machinists voted in November to reject a contract by a 2-to-1 margin.

Since then, Boeing has come back with what it called its "best and final" offer. Even though the local union leadership flatly turned it down, the union's national leadership scheduled the Friday vote.

In a flier posted online exhorting union members to rally Thursday against the offer, District 751 President Tom Wroblewski said, "we are under a great deal of pressure to give up our pension, pay dramatically more in healthcare costs and stagnate wage growth so we have less take-home pay going forward."

"Vote no," he urged, "and tell Boeing to focus on building the 777X here because analysts, customers and shareholders agree — that is the right choice."

"Hell, no!" they chanted, over and over. "Vote no!" they cried. Cowbells rang. "How you gonna vote tomorrow?" one speaker asked the crowd. "No!" was the spirited response.

Rod Wiegand, a 59-year-old machinist who works at Boeing's Everett, Wash., plant, waved a multicolored sign that read "No Still Means No" and listened intently during the short, fiery rally.

"I am absolutely voting no" on the contract Friday, Wiegand said. "I'm getting ready to retire, and I'd kind of like to have my pension."

In a statement issued Thursday, Boeing officials did not address the possibility that workers will turn down the current offer but rather guaranteed that a "yes" vote will keep the lucrative project in the company's biggest manufacturing region.

Boeing's proposed eight-year contract, which would start in 2016, would cut some pension and healthcare benefits.

In addition, conventional pension plans for newly hired machinists would be converted to a 401(k)-type of retirement program. Boeing would contribute 10% the first year, 10% the second, 6% the third and 4% for each year up to the end of the contract.

For the new vote, Boeing said it sweetened its offer with an additional lump-sum signing bonus of $5,000 to be given to each union member in 2020. That would be on top of the previously offered $10,000 bonus for 2016. Employees also would receive additional dental benefits, the company said.

The new aircraft would be the latest version of the twin-aisle 777, one of Boeing's bestselling models. Versions of the plane have been built in Washington since the early 1990s.

The 777X, which Boeing said will be the largest and most fuel-efficient twin-engine jet in the world, is seen as vital to the company's fortunes in the long-haul market for decades to come.

In an opinion piece Thursday in the Seattle Times, former Washington state Atty. Gen. Rob McKenna urged union members to vote yes on the new contract to protect the region's economy — and their own jobs.

Re: The Battle for Seattle

I'm a retired member of IAM 751 and I disagree with a number of points in this piece, starting with "The contract would have kept thousands of jobs in the area" - Boeing already has a big foot out the door and there's no guarantee that it won't renege tomorrow on any promise made today.

"union members would have been voting to freeze their own pensions " The main point that the writer missed is that the contract would have replaced the defined-benefit plan that many of us won and maintained over at least four strikes, with a plan based on the stock market. Members don't want to saddle their kids and successors with less than we have.

It should be noted that Boeing gave members and state politicians 1 week to give the company $8 billion in tax breaks and our pensions. The legislature took only 3 days to acquiesce. The Machinists, I'm proud to say reponded otherwise to this blackmail. Also, be aware that Machinists have an existing contract into 2016. The company wanted to replace it and pressure from our International president and politicians and the scabbing Seattle Times forced a vote. It's a great tribute to members and dissident staff that they were able to rally a 2/3rds rejection in a week.

Machinists did follow the success of the grocery workers and strikes at Belshaw and UNFI and in turn, gave heart to Metro drivers and mechanics in ATU 587 who last week rejected a concessionary tentative agreement  by 80%.

Enough hand-wringing from analysts, please. Let's stick together and fight back.