How the Rise of Women in Labor Could Save the Movement

A new wave of female labor leaders are winning by thinking big. 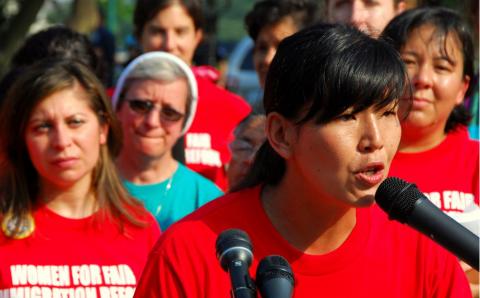 "While birthing ROC I have birthed two children," Saru Jayaraman, co-founder and co-director of the restaurant worker organizing group ROC United, told me over the phone. She was talking over the yells and laughter of her young daughter, riding in a car with her between meetings. "I've been really thinking about work/life balance, and I want for myself the same things I want for the restaurant workers. Our two priority issues, paid sick days and the minimum wage, are framed as gender justice issues."

Even as the traditional labor movement falters, hitting a ninety-seven-year low in membership rates, female labor leaders like Jayaraman are on the rise and becoming highly visible. Women workers, who were all but shut out from unions in the 1930s, when the movement first gained real power, have been pushing into the top ranks. Mary Kay Henry is president of SEIU, one of the largest unions in the country. Randi Weingarten heads the American Federation of Teachers. At the AFL-CIO, Elizabeth Shuler is the secretary-treasurer and Arlene Holt-Baker recently retired as executive vice president.

Lower-profile leaders are also making headway - and meeting with success. Karen Lewis, president of the Chicago Teachers Union, made headlines around the country when her members went on strike in 2012 and won important concessions. At the helm of the New York Taxi Workers Alliance, Bhairavi Desai secured a fare hike that benefits taxi drivers. And outside the traditional labor movement, in the so-called "alt-labor" sector, female leaders dominate: Jayaraman at ROC United, Ai-jen Poo at the National Domestic Workers Alliance and Caring Across Generations, Nadia Marin Molina with day laborers at the National Day Laborer Organizing Network, Sarita Gupta at Jobs With Justice, and Madeline Janis bringing workers together with other groups in Los Angeles through LAANE.

These women are bringing new ideas and strategies to labor organizing, many of which are borrowed from the women's movement - like making the connection between what workers face on the job and what they're dealing with at home. They don't only target corporate bosses but bring together a variety of stakeholders within communities to fight for change in the workplace and beyond. And they're bringing an influx of new members to the movement by reaching out to primarily female workforces that have often been excluded. Most importantly, for a movement accustomed to a steady erosion of power: they're winning.

Women have only recently made headway into real positions of power in organized labor, after making slow progress over the movement's history. "The male leadership have been very pleased to accept the assistance and support of women union activists and leaders," said Ileen Devault, a professor of labor history at Cornell, "but they haven't been so eager to give them actual power in the union movement." The early labor movement organized workers by occupation, in highly gender-segregated workforce, women were often left out of jobs that became unionized. Even when women began to be organized, they were relegated to segregated locals.

By the mid-1930s, union leaders began to realize that success would rest on organizing all workers at a workplace, no matter their gender, race or skill, explained Roosevelt Institute Fellow and labor expert Dorian Warren. That's when women began to make gains in leadership. But women labor leaders aren't only found at the top: between the late 1980s and late 1990s, the percentage of female lead organizers increased from 12 to 21 percent. Meanwhile, the rise of the "worker centered movement" - groups such as the National Domestic Workers Alliance or ROC United that aren't formal unions but help workers organize and advocate for better conditions - has been more effective at fostering the leadership of women and people of color than traditional unions, Warren says.