Progressives Shaking Things Up in the South 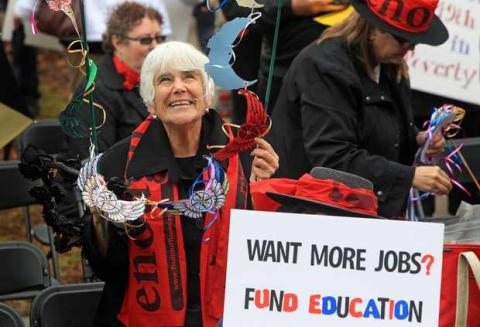 This past Monday on a dreary afternoon, more than 500 people gathered in front of the Golden Dome, Georgia’s state capitol building in downtown Atlanta. As they huddled under umbrellas, clutching signs, a booming voice assured them that while the rain may have dampened the turnout, their presence would not go unnoticed.

“All over North Carolina today, we have Georgia on our minds,” Rev. William Barber intoned from a podium at the capitol steps. Rev. Barber heads the North Carolina chapter of the NAACP, and on Monday, was an emissary from the state that captivated the nation during its last legislative session.

Last summer, thousands of North Carolinians descended on the capitol in Raleigh week after week, to protest a long list of regressive measures enacted by the Republican-controlled government. More than 900 people were arrested for peacefully occupying the legislative building over the course of what became known as the Moral Monday movement.

Now that movement is spreading. January 13 marked the beginning of the Georgia General Assembly’s legislative session and the first day of Moral Monday Georgia. To ring it in, Barber joined members of the Moral Monday Georgia coalition in calling for “a new Southern strategy.”

The Moral Monday Georgia coalition is comprised of more than 50 labor groups, social justice organizations and churches. They are up against a two-thirds Republican majority in both the State House and Senate, which have a significant Tea Party influence. As recently as last August, the coalition was no more than an idea discussed by housing rights activists as they resisted the wrongful eviction of a Desert Storm veteran in Atlanta [3].

“We’re starting from scratch,” acknowledges Tim Franzen, an organizer with both the American Friends Service Committee and Occupy Our Homes Atlanta. In contrast, North Carolina’s Moral Monday spawned from eight years of coalition-building.

Franzen says that the members of Moral Monday Georgia are planning at a pace that makes sense, given the project’s relative infancy. He isn’t certain there will be rallies at the capitol every Monday of this session, like there were in Raleigh. So far, the group has planned three weeks into the future.

The goal is to bring people together to impact state policies on a range of issues, and to grow into a statewide movement in connection with similar movements in other Southern states.

In an interview, Franzen explained the southern focus by quoting W.E.B. DuBois’ famous statement, “As the South goes, so goes the nation.” Franzen says that many of the problems plaguing the nation are at their worst in the South. The South must set the precedent for social and economic change in order for the rest of the country to follow suit.

The Moral Monday movement focuses on state budget and policies because, he says, “that is a lot of what the corporations have decided to do over the last 30 years.” Franzen cites model legislation developed by the American Legislative Exchange Council as an example of how corporations and right-wing extremists have spread ultra-conservative policies nationwide by focusing on state-level politics. The Moral Monday vision is to flip the script on ALEC and other right-wing heavyweights by becoming a stronger force on the same turf.

Each Moral Monday Georgia rally will focus on a specific issue. This first inaugural gathering centered on Medicaid expansion. Georgia is one of 21 states that have opted out of expanding Medicaid under the provisions of the Affordable Care Act. The decision, made by Republican Governor Nathan Deal, denies health coverage to over 600,000 Georgians who would qualify. His reason? The federal government only foots the bill in full for three years. After that, federal funding would be gradually reduced to cover 90 percent of the cost.

For a governor whose political clout stems from the rhetoric of cutting big government down to size, refusing to spend an additional $2.1 billion (the cost of paying the other 10 percent over the first 10 years) isn’t surprising. But for someone who has vowed [4] to make Georgia the number-one state in which to do business, Deal's not making much economic sense. According to a report by the Georgia Budget and Policy Institute, for every $1 spent on expanding Medicaid, Georgia would see a return of more than $30 in new economic activity — an estimated total of $65 billion over 10 years that would support 56,000 new jobs and create more than enough tax revenue to offset the initial cost. Similar equations have ledRepublican governors [5] in other states to forgo partisan politics in favor of expanding Medicaid.

As economically wrongheaded as it is to reject the expansion, harder to stomach is the human impact of Deal’s choice. Georgia has the fifth largest uninsured population in the country. Medicaid expansion would cover over a quarter of the two million Georgians who rely on emergency room services, or nothing at all, to meet basic health needs.

At Monday’s rally, in between speeches by pastors and organizers — and a rendition of “This Little Light of Mine” sung by the Moral Monday Choir — a young man named Antwon Brown took a turn at the mic. He talked about working at the fast-food chain Long John Silver’s for seven years. Only after Brown and his co-workers went on strike did they receive a 25 cent raise. Brown is uninsured, but when he checked out his options under the Affordable Care Act, he found he would have to pay $235 per month to access Medicare.

“Many Georgia residents who are low-wage workers like myself can not afford Medicare, and can’t afford to live, really,” he told the crowd. Brown would be eligible for Medicaid if Deal implemented the expansion.

Allie McCullen, who is in her mid-20s, would also have access to Medicaid under the expansion. She explained how, after graduating from the University of Georgia with two degrees, she couldn’t find work in her field. She decided to save up to go back to school and took a job at a clothing retailer. She had access to benefits, but they were deducted from her $9-an-hour paycheck, and offered limited coverage.

“The stress of being behind on student loan payments and owing my roommate hundreds of dollars, on top of the stress of an unfulfilling job and an unhealthy work environment, left me sick more often than not and struggling to meet co-pays and even discounted prescription costs.”

Ironically, she left her job with benefits to get well. But even though she is now on track to attend graduate school and things are looking up, McCullen worries that unexpected medical costs could derail her plans.

She said, “A fight with a can of cat food on Friday reminded me of how unpredictable health emergencies can be. A few millimeters deeper of a cut, and I would have ended up in the emergency room, thousands of dollars deeper in debt, rather than in urgent care with a few stitches.”

For others, lack of healthcare isn’t a looming shadow, but a dark and immediate reality. A 2009Harvard Medical School study [6] found that 45,000 annual deaths in the U.S. are associated with a lack of health insurance. In acknowledgement of the deaths that could be prevented by expanding Medicaid in Georgia, rally organizers asked demonstrators to choose a white foam core cross, Star of David, or crescent and star from boxes placed throughout the area. Each person placed a symbol on the steps of the capitol, and then touched the building’s massive doors, in a sort of laying on of hands.

The Moral Monday Georgia kickoff was followed Tuesday by a statehouse rally in South Carolina dubbed Truthful Tuesday [7]. Franzen says that members of the Truthful Tuesday coalition were part of a convergence of organizers from several states, including Georgia, that recently met in North Carolina to discuss building the moral movement.

As Georgia and South Carolina’s campaigns get off the ground, Rev. William Barber is embarking on a statewide tour in North Carolina to drum up support for an annual people’s assembly in Raleigh [8]. For the past seven years, citizens from across the state have flocked to the capital on the second Saturday of February, building the momentum that led to the Moral Monday protests. This year’s assembly will be a continuation of that. Organizers are still meeting to determine if Moral Mondays in North Carolina will continue when the legislature convenes in May

Next up on Moral Monday Georgia [9]’s calendar is joining Atlanta’s MLK Day parade on January 20, rallying again for Medicaid expansion on January 27, and taking on Georgia’s “stand your ground” laws on February 3.

Democratic state Sen. Vincent Fort, the only legislator in the speaker lineup at the Monday rally, is sponsoring a bill to repeal the state’s stand-your-ground law, which authorizes citizens to use deadly force in defending their homes. Debate recently flared up around this law when a Georgia homeowner fatally shot an Alzheimer’s patient mistaken for an intruder.

Sen. Fort’s bill stands in contrast to Republican legislation that would allow guns to be carried in schools, houses of worship, airports and government buildings. The legislation failed to pass in the final hour of the last session due to a technicality that divided Republicans. A slightly revised version is expected to quickly pass as one of the first items of business this session.

Other issues the coalition will focus on are education, voting rights and immigrant rights.

Tim Franzen says that, moving forward, the biggest challenge in building Georgia's Moral Monday movement will be establishing common ground with people who have traditionally voted for conservative extremists, against their own interests. The coalition will also need to expand to include more groups from different parts of the state. Aside from a few carloads of supporters from North Georgia, the crowd on Monday was mostly people from the Atlanta area.

The rally dispersed 15 minutes early, as the rain picked up and rush-hour traffic choked the surrounding streets. Demonstrators left signs arranged with crosses, stars and crescents along the fence ringing the capitol. They snapped photos and chatted as they vacated the campus under shared umbrellas.

Franzen says the next rally for Medicaid expansion will have a more urgent tone. “We’re either going to be celebrating Governor Deal’s decision to do the right thing by opening the door for thousands to get life-saving services,” he portends, “or we’re going to escalate the campaign in a way that hasn’t been seen in a long time.”