"We Shall Overcome": Honoring Pete Seeger

Seeger is famous, of course, for making “We Shall Overcome” a civil and human rights anthem. The story of where he found that song is told below by historian Christopher Phelps. It is excerpted, by permission, from Christopher Phelps, "Lefts Old and New: Sixties Radicalism, Now and Then," in A New Insurgency: The Port Huron Statement and Its Times, eds. Howard Brick and Gregory Parker (Ann Arbor, Michigan: University of Michigan Press, forthcoming). 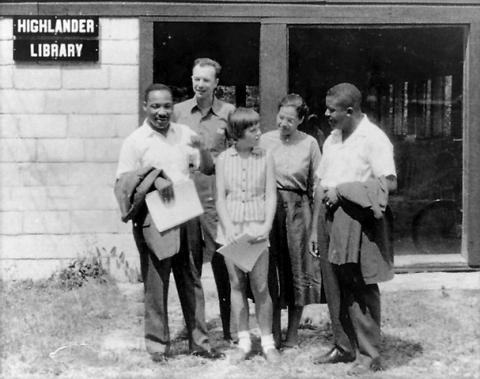 Now so familiar as to risk seeming clichéd, “We Shall Overcome” was the paramount song of the civil rights movement. “Deep in my heart, I do believe, that we shall overcome some day”: the song spoke to a generation’s idealism, solidarity, and optimism in the coming triumph over injustice.

It is now practically lost to memory that the song enjoyed an equal vitality within the early New Left. We Shall Overcome was the official songbook title of the Student Non-Violent Coordinating Committee (SNCC), a group more important than the better-known Students for a Democratic Society (SDS) in generating sixties New Left radicalism. When Tom Hayden, at age 21, traveled south from Michigan in 1961 to observe SNCC’s efforts to register black voters in Mississippi, he returned to write the SDS pamphlet Revolution in Mississippi, which, issued in the same year as the Port Huron Statement, reproduced all the words to “We Shall Overcome” on its title page. Joan Baez, twenty-two, sang “We Shall Overcome” at the 1963 March on Washington, and Pete Seeger sang “We Shall Overcome” together with SNCC staff in Mississippi during Freedom Summer in 1964.

So popular was the song that President Lyndon Baines Johnson spoke the words “we shall overcome” in a nationally televised address in 1965 to advocate the Voting Rights Act, a striking instance of that curious alchemy by which the radical becomes mainstream. Yet when SNCC’s Bob Moses, historian Staughton Lynd, and radical pacifist David Dellinger led a march on the White House later in 1965 to signal the transformation of the civil rights movement into a movement against Johnson’s own war in Vietnam, they still sang “We Shall Overcome.”

If “We Shall Overcome” seems the quintessential song of the sixties, that is only due to the erasure of its origins in a much earlier left. The song first appeared as sheet music in 1947 in People’s Songs, a periodical Pete Seeger founded after the demise of the Almanac Singers, which he and Woody Guthrie had created to arouse anti-fascist spirits on the eve of the Second World War. One of Seeger’s associates, Zilphia Horton, had set down the words and music as “We Will Overcome” in 1947, after she heard it sung by Black women in the Food and Tobacco Workers, a Communist-led union out on strike against the American Tobacco Company in North Carolina. Those women, in turn, had adapted it from the old gospel hymn “I’ll Overcome Someday.”

The song became a staple at rallies for Henry Wallace, whose independent Progressive Party campaign in 1948 against Harry Truman protested the Cold War and racial segregation. There the song sustained wishful thinking, since far from overcoming, the Wallace campaign was the last gasp of a Popular Front left, soon to be suppressed by McCarthyism.

Around 1955, the year when Seeger was called before the House Committee on Un-American Activities, the singer, in an inspired move, substituted “shall” for “will,” transforming “We Will Overcome” into “We Shall Overcome.” In that iteration the song was taught at the renowned civil rights leadership training center, Highlander Folk School, in Monteagle, Tennessee. There, Rosa Parks, Septima Clark, and Martin Luther King, Jr. learned the song and transformed it into a movement anthem as the civil rights tempo quickened with the Montgomery Bus Boycott of 1955-56.