The Stealth Privatization of Pennsylvania's Bridges

Pennsylvania Gov. Tom Corbett's administration has decided to sign a 40-year contract to privatize the state's crumbling bridges, but there has been little to no media coverage of the deal and what it will mean for two generations of Pennsylvanians. 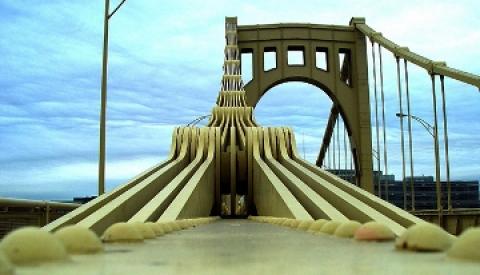 At midnight of January 20, 2014, the Pittsburgh Post-Gazette announced that the administration of Gov. Tom Corbett finally decided to take action on the state's crumbling bridges. The action it is taking is to sign a 40-year contract to privatize Pennsylvania bridges.

In the case of Pennsylvania's bridges, the private contractor takes on responsibility for designing, constructing, financing and operating bridges for up to 40 years. [PennDOT, McCalls] Experience with infrastructure privatization shows what we can expect as the bridge privatization proceeds.

Pennsylvania will hire a privatization industry insider as a consultant to advise the state. International firms such as Mayer Brown, Morgan Stanley and Macquarie frequently are hired to act as the consultant and, in other cases, will sit on the other side of the table as the private contractor. Consultants often are paid a "success fee" if a privatization agreement is reached. The success fee will motivate the adviser to recommend privatizing.

There is no question that the November PennDOT announcement should have been big news months ago, because the state finally announced it was taking action on its dangerous bridges and because it was planning to privatize Pennsylvania's bridges for 40 years. These are certainly issues Pennsylvanians care about, yet there has been almost no media coverage concerning the decision to privatize the state's bridges.

The decision whether to privatize Pennsylvania's bridges for 40 years rather than repair and rebuild them deserves wide and thoughtful discussion instead of silence. Here are some questions that Pennsylvanians and their representatives need to ask and to press for answers to:

What is the real cost of privatization? Will the deal really cost less than the traditional way of building and repairing bridges - that is, hiring private firms as consultants, engineers and construction crews to do the repair work while the people of Pennsylvania retain control and ownership of the bridges?

1. What is the real cost of privatization? Will the deal really cost less than the traditional way of building and repairing bridges - that is, hiring private firms as consultants, engineers and construction crews to do the repair work while the people of Pennsylvania retain control and ownership of the bridges?

2. Once the government and private contractor sign their 40-year deal, the people of Pennsylvania will have to live under a 40-year monopoly contract that will cost the state money any time it needs to make a change. What will the privatization contract say about adverse action and other contractor rights?

3. Forty years is two generations, and there likely will be many unanticipated situations the contract does not cover. For example, how will developments in transportation technology affect the bridges? Will Pennsylvanians have to pay adverse-action compensation because the contract terms don't cover new technology or other changes? If PennDOT starts making changes outside the contract, how will it affect the parties' costs and responsibilities? Any adjustments once the contract is signed will become particularly expensive, because locking the state into such a long contract takes away the state's bargaining power.

4. Right-to-know rights currently give the public the right to ask for public records. How will the public's right to know be affected once bridge-related activities become confidential, private business practices?