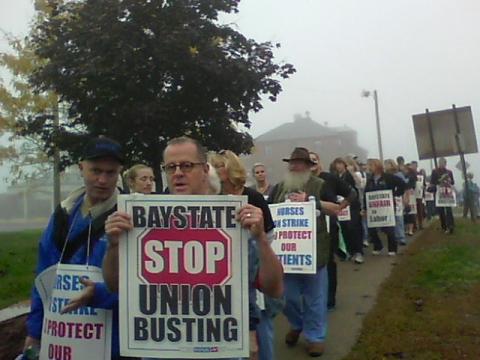 MNA nurses in a one-day strike at Franklin Medical Center,

Moderators Note, some background to this battle.

Baystate Health is a so-called "non-profit" hospital system, centered in Springfield Ma. It employees 10,000 workers and has been rapidly expanding, buying small local hospitals, Franklin Medical Center in Greenfield Ma. being one of their acquisitions. The CEO of this "non-profit" earns over 1 million dollars per year.  Of the 10,000 employees, all are non-union, except for 200 nurses at Franklin Medical Center and 60 nurses with the Visiting Nurses Association. All these nurses are members of the Massachusetts Nurses Association. In March of 2012 the Occupy Franklin County group held demonstrations in support of the Nurses.  In October 2012 the Nurses held a one day strike, with hundreds of community supporters joining the picket line. This fight to save their union has been going on for more than 2 years.

GREENFIELD, Mass -- The registered nurses of Baystate Franklin Medical Center (BFMC) have reached a tentative agreement on a new five-year contract, averting a one-day strike that was planned for Monday, Feb. 10.  The pact provides protections the nurses had sought to prevent the use of mandatory overtime as an alternative to providing safe staffing at the hospital.  It also includes improvements to the nurses' health insurance benefit and will grant the nurses pay raises.

The settlement was reached during negotiations held Thursday and Friday.

"We are thrilled to have finally reached an agreement that will provide the protections we need to ensure our patients receive the care they have come to expect from the nurses at Baystate Franklin Medical Center," said Linda Judd, a longtime nurse at the hospital and co-chair of the Massachusetts Nurses Association/National Nurses United local bargaining unit at BFMC.  "This is an agreement where everybody wins:  our patients, our nurses, our employer and our community"

Judd was quick to acknowledge all the support the nurses received from the communities throughout Franklin County in reaching this hard-fought victory that stretched over more than two years and 44 negotiating sessions. 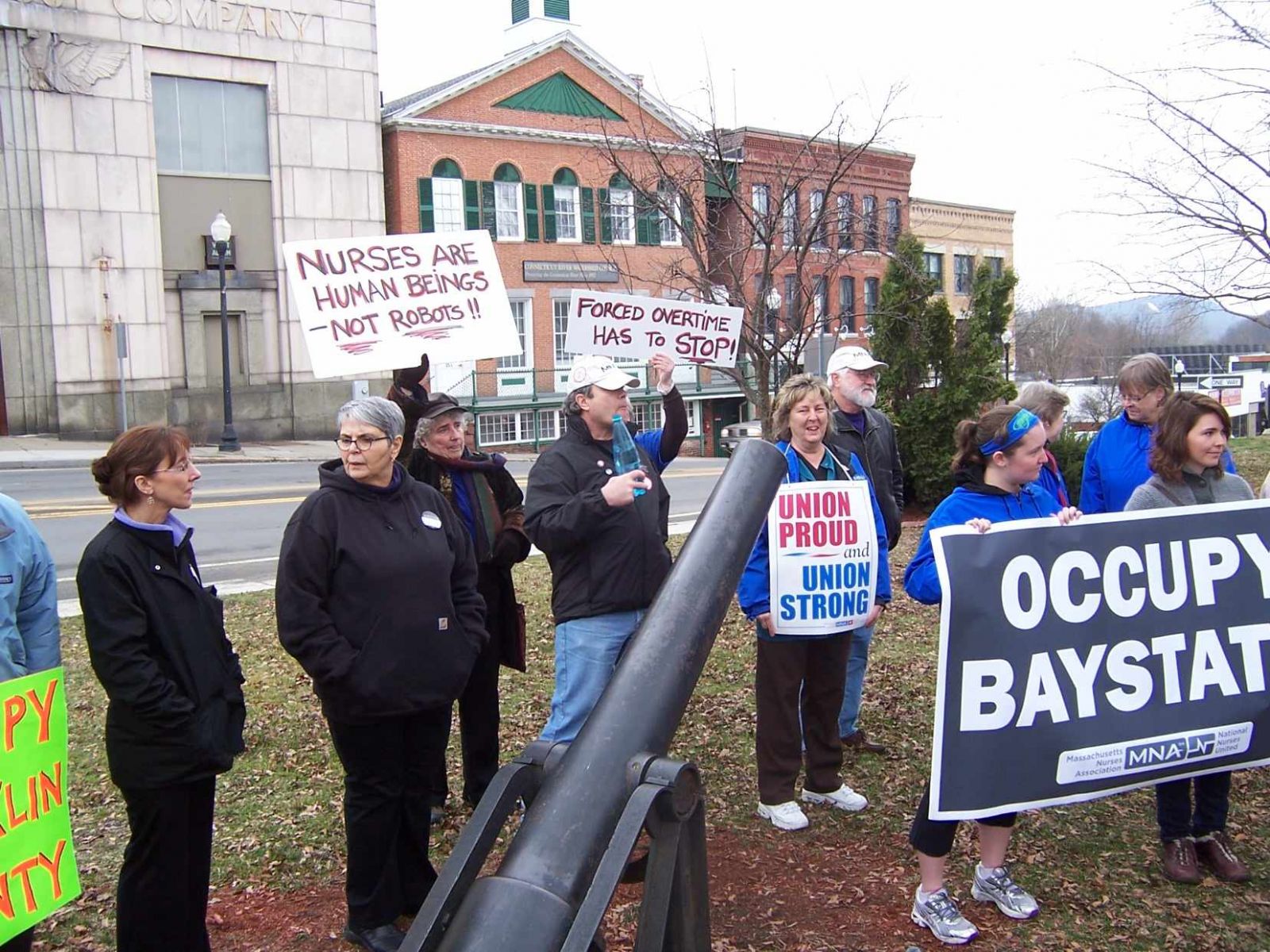 "In reaching this settlement it is important to recognize all those in our community, including thousands of individual residents, as well as local public officials, who stood with the nurses through this long struggle.  We also want to thank State Senator Stanley Rosenberg for hosting these negotiations over the last two days, with a special thanks to Senator Elizabeth Warren and Congressman James McGovern, who spearheaded the effort to get the parties together this week, and without whom we would not have achieved this resolution."

Highlights of the Tentative Agreement

The new contract covers five years, and expires on Dec. 31, 2016.  Highlights of the agreement include:

Baystate withdrew its proposal to eliminate "daily overtime."  Baystate's call for this concession, where they would pay overtime only after 40 hours worked was the key sticking point in the talks.  Instead the parties agreed to maintain the nurses' current benefit, with the addition of a one-hour grace period for daily overtime. This means that any work that is performed beyond one hour after the end of a nurse's scheduled shift triggers payment of time and one half back to the end of the nurse's scheduled shift; and in all cases, nurses have the protected right to refuse to work over time if he/she feels this would jeopardize the care of his/her patients.

Baystate has agreed to clear language in the contract obligating Baystate to fully comply with the Massachusetts state law banning mandatory overtime. This law prohibits hospitals from using the dangerous practice of mandatory overtime as an alternative to providing safe staffing and guarantees that no nurse can be required to work beyond their scheduled shift.  The hospital had previously refused to provide a contractual guarantee to adhere to the law, which, in combination with their demand for a concession on overtime pay, led the nurses to make a stand and strike over this important patient safety issue.

An increase in the share of the family health insurance premium that Baystate pays from the current 70 percent  of premium to 75 percent of premium.

The nurses had announced their plan to conduct a one-day unfair labor practice strike on Monday, Feb. 10, in direct response to Baystate Health's illegal declaration of impasse two weeks ago and its plan to implement its last offer, which would eliminate the nurses overtime benefit.  As part of the settlement, Baystate agreed to rescind its declaration of impasse and the nurses agreed to withdraw a number of charges they had filed with the National Labor Relations Board that arose out of this dispute.

There has been an outpouring of support for nurses' collective bargaining rights over the last year. At the Democratic State Convention held in Springfield last summer, the convention delegates unanimously passed a resolution calling on Baystate to conduct good faith negotiations with the MNA/NNU nurses and to come to a fair agreement. The Greenfield City Council passed a similar resolution last year. Thousands of Franklin County residents had signed a petition of support for the Baystate Franklin Medical Center nurses and delegations of community supporters and elected officials had called on Baystate to avoid further conflict and settle a fair contract with the nurses at BFMC.

The nurses and a growing coalition of community members and leaders have also been working together on a campaign to preserve and expand vital health care services at Baystate Franklin Medical Center. In concluding their contract negotiations today, the nurses pledged their continued commitment to this effort.

"The nurses appreciate the deep and broad community and political support that has been shown across Franklin County," said Donna Stern, RN, a nurse at the facility and co-chair of the bargaining unit.  "And as committed caregivers and members of this community, we look forward to continuing our efforts to work with our community allies to ensure patients have access to the full range of services they need right here in Franklin County."

Founded in 1903, the Massachusetts Nurses Association/National Nurses United is the largest professional health care organization and the largest union of registered nurses in the Commonwealth of Massachusetts. Its 23,000 members advance the nursing profession by fostering high standards of nursing practice, promoting the economic and general welfare of nurses in the workplace, projecting a positive and realistic view of nursing, and by lobbying the Legislature and regulatory agencies on health care issues affecting nurses and the public. The MNA is a founding member of National Nurses United, the largest national nurses union in the United States with more than 170,000 members from coast to coast.