While Volkswagen has vowed not to interfere, however, outside forces have picked up the anti-union playbook and are telling workers that choosing union representation could endanger their jobs. 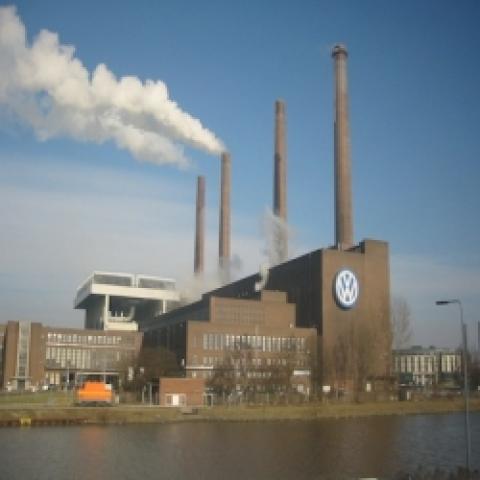 Volkswagen employees go to the polls on Wednesday, but will state politicians' threats affect their union election? , Andreas Praefcke/Wikimedia Commons

In the run-up to a union election, workers typically run a gauntlet of threats from management, including claims that a vote to unionize will jeopardize their jobs by hurting the company’s bottom line.

But in the case of an upcoming union election for Volkswagen’s 1,600-worker auto plant in Chattanooga, Tenn., set to run from February 12–14, the company has pledged to remain neutral during the union drive. Last week, Volkswagen even invited the United Auto Workers (UAW), which is vying to represent the workers, to come and make a pre-election presentation at the plant.

While Volkswagen has vowed not to interfere, however, outside forces have picked up the anti-union playbook and are telling workers that choosing union representation could endanger their jobs. At a press conference on Monday, Tennessee Republican State Senate Speaker Pro Tempore Bo Watson and Republican House Majority Leader Gerald McCormick implied that state subsidies to Volkswagen could be blocked if the plant unionizes.

Democrats and union supporters reacted with indignance to what they perceived as a thinly-veiled challenge to workers’ collective-bargaining rights at the behest of state officials.

“It’s an outrage that state Republican leaders would threaten jobs at the Volkswagen plant by claiming they would vote against incentives to their employer if the workers choose to unionize,” said Democratic State Rep. Sherry Jones in a statement released by the UAW. “We should all reject the type of scare tactics and misinformation coming from special interest groups and Republican elected officials.”

Though Volkswagen does not oppose unionization at the Chattanooga plant, a fight has been brewing with outside anti-union groups, who are throwing their weight around in an attempt to influence the union vote at Volkswagen. In November, Working In These Times obtained leaked documents from Matt Patterson, a Grover Norquist-backed political operative, outlining how he intended to spend hundreds of thousands of dollars to persuade workers to vote against the UAW. A top anti-union consultant also told In These Times that national anti-union groups were gearing up to fight the UAW at Volkswagen in order to prevent the union from gaining a foothold as it seeks to organize other plants across the South.

Now, this fight appears to be kicking into high gear. According to a February 4 article in the Wall Street Journal, the Center for Worker Freedom, a Grover Norquist-backed anti-union group that is an arm of Norquist's Americans for Tax Reform, has booked radio spots to air anti-union ads and rented 13 billboards around the city to display anti-UAW messages.

One such billboard has the words “United Auto Workers” with the word “auto” crossed out and substituted with the word “Obama.” The billboard also contains a spelling error that provoked ridicule from some labor activists on Twitter: “The UAW spends millions to elect liberal politicans [sic],” the billboard proclaims.

The billboard also directs viewers to the website of the Center for Worker Freedom. One February 5 blog post featured on the site is titled, “UAW Wants Your Guns, Part 1.” In the post, anti-union consultant Matt Patterson writes that Rep. Steve Cohen (D-Tenn.), is "only one of many UAW-backed politicians who are openly hostile to the 2nd amendment. You can bet that if the union is successful in organizing Chattanooga’s Volkswagen plant, they will fund an anti-gun agenda in Hamilton County as well.” (In 2012, the UAW gave $10,000 to Rep. Steve Cohen).

Volkswagen worker Michael Cantrell, a supporter of the UAW, believes that this type of political posturing goes too far. “The billboards, advertising and press activities by those not even from our community leave a bad taste in my mouth,” Cantrell wrote in the statement put out by the UAW. “We also placed our trust in elected officials, but they’ve chosen to put their own political interests first and they are interfering in our election too.”

Union supporters fear that the outside interference is beginning to hurt the likelihood of a union victory.

“Right now my feeling is that we are winning but the [anti-union workers] along with their outside help is turning some [people] away that once were supporters” pro-UAW Volkswagen worker Wayne Cliett tells Working In These Times. “I believe we have the votes, [we] just have to make sure everyone of our supporters votes. I have a good feeling about the outcome and at the same time, I'm a little nervous.”

Mike Elk is an In These Times Staff Writer and a regular contributor to the labor blog Working In These Times. He can be reached at mike@inthesetimes.com.