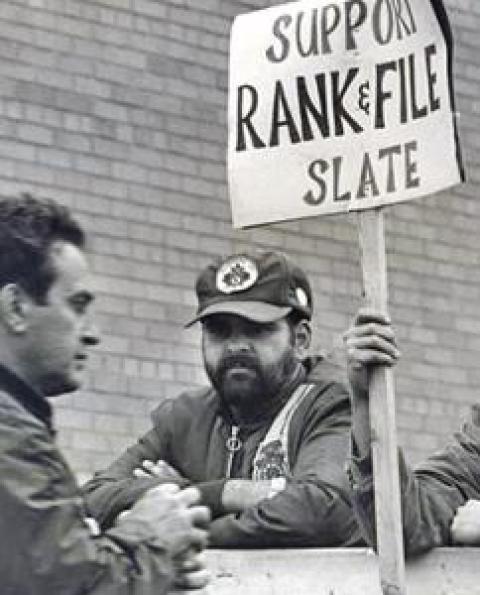 Pete Camarata at a Picket in Detroit,

"No Retreat Pete," as some of his many admirers called him, was the son of Casper Camarata, an immigrant from Sicily and autoworker in Detroit, who helped found the United Auto Workers. Pete's mother Mary was a cook, who often put her talents to work for union gatherings.

Pete was active in his church and high school, where he was involved in social justice causes. He attended Wayne State University in Detroit before taking a job in 1968 at Earl C Smith Trucking, where he worked first on the loading docks and then as a city driver. He became a member of the International Brotherhood of Teamsters (IBT)--within 10 years, a magazine had given him the title of "best-known Teamster rebel."

As a member of Teamsters Local 299--the most important local in the country at the time and home base of Jimmy Hoffa, who emerged to become the dominant figure in the Teamsters--Pete fought to return the union's power to the rank and file. This often put Pete at odds with the corrupt leadership of the local. He was soon well known, too, among International IBT officials as a troublemaker--a label he wore proudly.

In 1976, Pete led a wildcat strike in Detroit that proved pivotal in winning a National Master Freight Agreement that served the rank and file.

As an organizer of Teamsters for a Decent Contract (TDC), formed the previous year, Pete had been tireless in helping to organize a national campaign led by rank-and-file union members, which forced IBT International officers to call an official strike over the contract. However, the three days on the picket line failed to dissipate the energy generated by the TDC campaign--thus the wildcat strike of Local 299.

Pete and fellow Teamster Ray Lewis were fired for their part in leading the wildcat--but were reinstated when it became clear to not only IBT officials and trucking company bosses, but the whole power structure of Detroit, that the city was on the verge of a complete shutdown.

Because of Pete's leadership and the trust of those who followed him, truckers across the country secured their best-ever freight contract.

While Pete's role in the 1976 contract fight was crucial, he never took personal credit. Telling the story of that struggle later on, he always focused on the TDC and the truckers who came together the previous year in Cleveland to plan the campaign. "Without TDC and the socialists who brought us together, we wouldn't have won," he would say.

That same year, Pete provided another inspiring portrait of commitment and courage--as the lone opposition delegate at the Teamsters convention in Las Vegas.

The union was controlled by the mob, its top officers ready to order killings and beatings. Pete nevertheless stood up on the convention floor to oppose a $150,000 salary increase for then-Teamsters President Frank Fitzsimmons, and to propose a resolution calling for direct election of IBT officers.

Outside the Aladdin Hotel, he was beaten nearly to death by goons hired to put an end to this new Teamster rebellion--they were under orders to kill him.

Pete would be a founding member of Teamsters for a Democratic Union (TDU), formed in the wake of the TDC campaign in 1976. He played a leading role in TDU for many years to come. In 1981, he ran an opposition campaign for IBT president. He won just 10 votes at the Teamsters convention--but this and other TDU struggles set the stage for Ron Carey's successful reform campaign for Teamsters president in the union's first direct secret ballot election in 1991.

PETE BECAME a socialist out of his experiences on the picket line and in organizing for union democracy. He joined the International Socialists after the wildcat strike.

It was a natural progression for this working class fighter. Not only had he devoted himself to building up rank-and-file power, but he also learned that this pointed toward necessity of workers' democracy on a world scale.

Eager to learn more about working-class history, Pete immersed himself in IS classes on labor struggles of the past and the tradition of international socialism. He was an energetic student and often dove into areas not normally associated with truck drivers. As a member of the International Socialist Organization in the 1980s, he gave a lecture at a Socialist Summer School on Russian revolutionary Alexandra Kollantai and her pamphlet "Sexual Relations and the Class Struggle."

Pete's experience and commitment was an aid to many struggles in the years that followed. He proudly walked the Teamster picket lines in 1997 against an old enemy, UPS, as the union's slogan "Part-time America won't work" galvanized support around the country. In 2011, he supported Sandy Pope's opposition campaign for Teamster president when Pope tried to unseat a labor lawyer from Pete's old Detroit local by the name of James P. Hoffa Jr.

Pete Camarata didn't live long enough, but the life he did live is an inspiration to all who knew him, and there were many. He traveled the country and went abroad to deliver the message of workers' power and socialism. Our condolences go out to his family and friends.

Pete's personal courage and deep faith in the power of ordinary workers will be sorely missed--but they will inspire us in all our struggles to come.